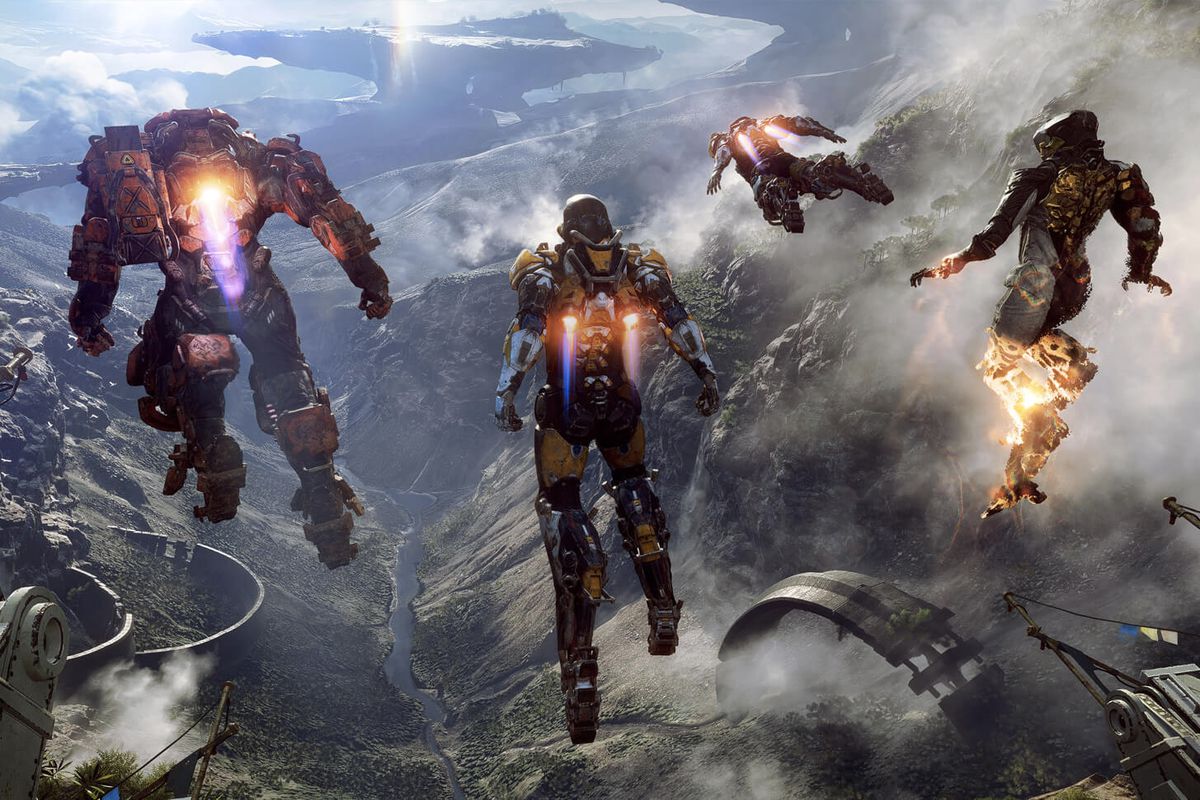 After myriad contenders like Destiny and The Division, folks who weren’t otherwise accustomed to terms like “endgame” and expansive amounts of loot grinding have found their footing.

Anthem most definitely has the potential to shuffle itself in the mix.

BioWare is putting their worldbuilding skills to the test with Anthem and managed to captivate me for the first time in years (sorry, Andromeda). Anthem‘s universe feels dangerous and stylish at the same time, a rare feat. The walled-cities juxtaposed to jungles is a nice look, drawing some naturalism into what is ostensibly a sci-fi world. It’s deliberately vague with its hero’s journey premise with a touch of mysticism, but it worked: I’m invested enough to see this through.

Anthem‘s world is one of its biggest strengths, actually. There’s no mysterious orb or giant ring to serve as a catalyst/harbinger of hope or destruction: Anthem is more content to show you, not just tell you about all of its dangers and what they mean. That includes a decent guided starting mission that legitimizes the stakes and some (welcome) exposition by way of some action-packed, well-choreographed cutscenes. An in-game lore book is a nice touch if you want to delve further than that.

All of this is backed up by some damn impressive visuals, especially on PC. In the first few hours we’re exploring lava-baked mountains seared with red hues, bright blue caverns, harrowing ruins that don’t overdo it on the darkness, and glittering green tropics. Getting from point A to point B isn’t so much the prerogative as I’m finding myself taking it all in more often than not. While that may very well be all of the archetypes from here on out, so far the promise of exploring zones down under the sea and into the sky is exciting.

Said environments are stunning, but gunplay and character movement look and feel fantastic in equal measure. The main gimmick Anthem offers is flight, complete with nuances like diving to cool your thrusters down and dancing in and out of a hovering state: it’s a hell of a way to sell an Iron Man simulator while Marvel remains pensive about giving us one. I’m primarily playing as the Storm (magic) class and it’s a blast. Elemental magic and combo capabilities (with multiple chain abilities) keep things interesting despite the lack of innovative equipment (so far, at least).

There aren’t many games where you can divebomb headfirst into a skirmish, hover, dive side to side by teleporting, incapacitate half of a group in ice, then smash the other half with a lightning nova. Guns be damned, there’s a lot of leeway for big plays and player skill. I’m excited to see where this goes as I grab more abilities (an arsenal so far that includes a “living” heat seeking flame). The weak non-impactful melee attacks remain my sole letdown.

Having experienced a lot more narrative bits than the recent demo, I have to say that good voice acting goes a long way in a subgenre typically devoid of it. The main character talks, a BioWare staple, further sucking me in (it seems like nearly everyone speaks actually). Blowing apart bugs and other non-humanoid creatures is also refreshing: another strength of BioWare.

So far my concerns are the standard looter shooter lows that are still popping up. Mission variety fatigue, potential loot problems (some of the items seem pretty expensive/grindy), endgame protection, that sort of thing. But I haven’t gotten to that point to fully judge it yet. For now I’m enjoying the ride and can almost recommend Anthem as a solo RPG experience.

As I said during my time with the demo, Anthem ticks all of the right boxes…initially. The true test is how I feel in a week, or even a month. Stay tuned as I work my way through the core campaign and continue to cover Anthem as it evolves.

[This review is based on a retail build of the game provided by the publisher, with early remote press access.]