Do you remember the awesome water effects of BioShock? Did you ever see that, and wonder what it would be like to play a game designed entirely to show those effects off, to the point where it gets in the way of the actual gameplay? Did you then want that imagined game to be one of the worst XBLA games released this year?

If so, then you are in for an absolute treat because Hydrophobia will have you covered. Covered in water. All of the time. To the point of tedium. 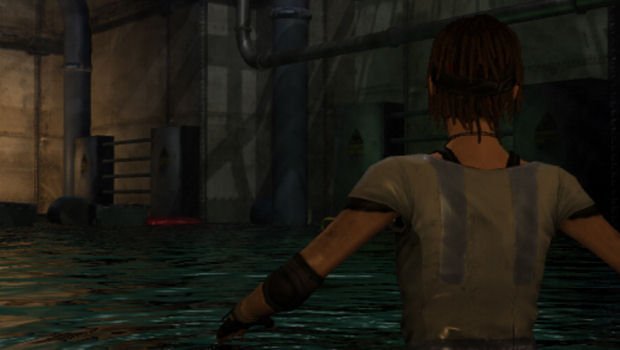 Hydrophobia is a “survival adventure” game set in a giant floating city boat known as The Queen of the World, which has been taken over by a mysterious group of terrorists. Engineer Kate Wilson finds herself in the middle of the conflict and must try to escape the rapidly flooding ship while trying not to get shot, electrocuted, burned or drowned. She’s also aided by a guy who looks and sounds like Shrek.

Although much has been made of the game’s water physics, there is actually very little gameplay that involves a clever use of water. In fact, the water’s only job is to be a massive hindrance, slowing Kate down, drowning her, or floating burning chunks of debris everywhere. Then there’s the swimming. The boring, dreary swimming with its bad controls and even worse camera.

Rather than employ any clever water-based puzzles or environments, the bulk of Hydrophobia‘s gameplay is rooted in endless, tawdry filler. The kind of filler that is used to pad out other, better, games. Finding keys, hacking computers, slowly climbing up grey walls, collecting an endless bounty of scattered items, Hydrophobia plays like a compilation of gaming’s most boring examples of brainless busywork.

Aided by a device known as the MAVI, Kate can hack computers in an increasingly banal frequency-matching minigame, play dull scavenger hunts by following invisible arrows to find keys, and use security cameras to look at things. It’s all rather dull, and these same tiresome tasks are repeated over and over again, with no hint of variation.

As far as the environmental gameplay goes, what it lacks in dullness it makes up for in frustration. With an absolutely terrible camera that insists on staring at Kate’s arse even when it would be easier to navigate from another angle, jumping from ledges or over chasms can sometimes amount to pure guesswork. Speaking of guesswork, the game regularly requires that of the player, with obscure ledges and no real direction given as to where to go next. 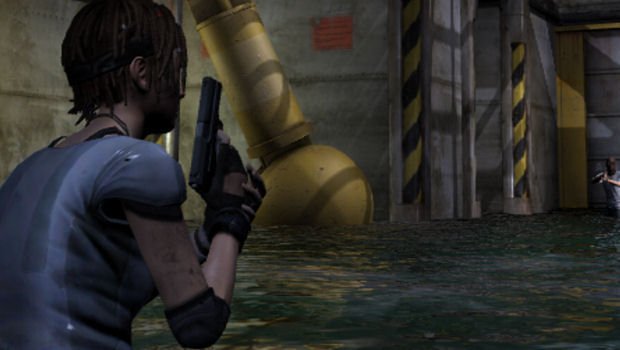 There is a map which points players in the right direction, but it forces one to focus on the objective first and then manually scroll back to the player location at an incredibly slow pace. Actually working out where you are in relation to the objective is a nightmare, and I’m not sure I’ve ever seen a map this bad, at least in the past ten years.

To be fair, the game occasionally gets it right. Every now then there will be a thrilling sequence where you rush through a flooding corridor, explosions happening all around you. These moments are few and far between, however, and pretty soon it’s back to drowning and chasing yellow arrows to find purple keys that for some reason are invisible on the wall.

It’s the “combat” system, however, that truly transforms Hydrophobia from “mediocre” to “poor.” Pretty soon into the game, Kate gets her hands on a gun loaded with “sonic” rounds that can stun enemies, and it is with this awful weapon that players must defend themselves for the entirety of the game.

In theory the general idea of Hydrophobia‘s combat is very noble and admirable. It’s based around using the environment to take out enemies, employing sonic rounds to stun enemies and drown them underwater, shoot electric cables or barrels, or … or actually there isn’t really much else to do, and that’s where Hydrophobia‘s noble idea becomes a lazy and sloppy one. At first it’s cool to keep an enemy stunned until he drowns, but after the fifth time, it’s just sad. There really isn’t much in the way of environmental mayhem, and even if you’re just cool with shooting explosive barrels forever, it’s usually difficult to get an enemy near the buggers.

Most of the combat consists of just endlessly stunning enemies until they die, and that’s when the game’s miserable targeting system doesn’t fail. Every now and then, bullets will just go right through enemies. Then there are the half-submerged battles in which crashing waves constantly switch Kate from a standing to a swimming stance, completely throwing the player off balance and generally disorienting the entire fight. Let us also not forget that the enemies themselves, even with their terrible AI, are able to drop Kate in a matter of seconds, and are sometimes stationed right behind doors or around corners to land a cheap-shot kill. 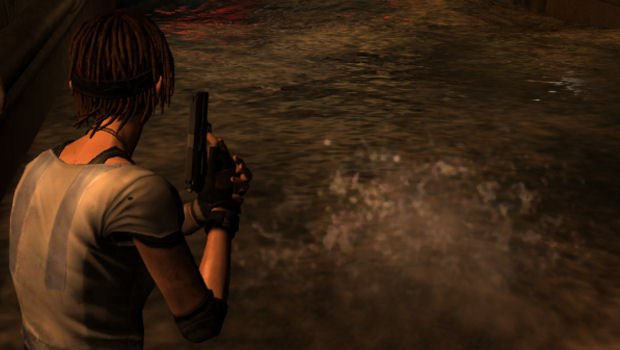 There is very little in the way of upgrades, although Kate can get her hands on useful ammo for her gun now and then. Only problem is, the ammo is as rare as interesting gameplay ideas, so don’t expect to ever have much in the way of lethal firepower.

Thankfully, Hydrophobia is an episodic game, which means it’s quite short. Otherwise, there’s very little else to say in the game’s favor. I can’t even say it’s a good idea poorly executed, as there isn’t a good idea to be found. The water gimmick isn’t a gimmick at all, it’s just there as window dressing and to get in the way. It’s about as crucial to the gameplay as the water in BioShock, and only half as pretty looking. In fact, the water effects really aren’t that great at all. Better games have done better things with water than Hydrophobia.

Hydrophobia isn’t straight-up, unforgivably dreadful. It’s mostly just boring, uninspired, and vapid. Were it not for the combat, one could get away with calling it an almost decent waste of time and money. The whole package, however, amounts to a tedious and frustrating exercise in futility. When the only lasting entertainment to be had is the moment your stepson actually thinks one of the characters is Shrek, you’ve not got a good game on your hands.

There are so many great Xbox Live Arcade games in the pipeline that you really shouldn’t waste your money on this one. Get Super Meat Boy or Comic Jumper instead. This game has no business launching alongside titles such as those.