Heavy Weapon has been available since the beginning of time. It was released in 2005, well before humans emerged as the dominant life form on Earth. In 2007, PopCap Games updated Heavy Weapon, applied the subtitle “Atomic Tank,” and released it on Xbox LIVE Marketplace. It’s now 2009 and the updated version of the game has finally found a new home on PlayStation Network.

You see? We get it. Heavy Weapon: Atomic Tank is old. 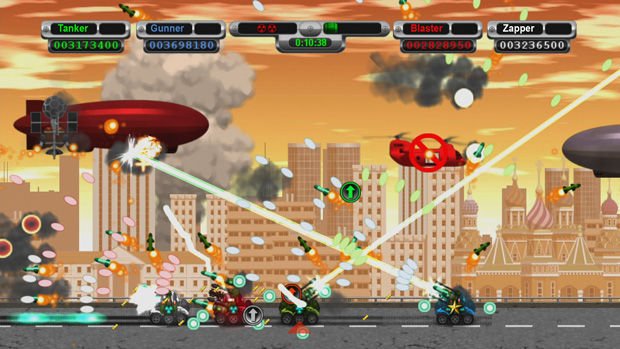 Heavy Weapon is one of PopCap Games’ side-scrolling shooters that was just recently released on PSN. Quite simply, you drive an atomic tank, and blast the crap out of anything that might be flying through the sky — save for the helicopter that drops power-ups on you (unless you’re aiming for that trophy). Fighting against Red Star, Atomic Tank is attempting to push back the evils of Communism, and doing so without any thought to the safety of the world by using as many nukes as possible.

An entire air fleet’s worth of different planes tries to shower lasers and missles on your parade, and besides nuclear bombs, you can earn yourself lasers, floating orbs, guided missiles, and plenty of other things by completing stages, allowing you to modify your tank into whatever killing machine your heart desires.

Each level, which took me about 10 minutes to complete, consisted of waves of planes coming in from the left and the right sides of the screen doing their damndest to hit you with missiles as they crossed the screen. So the goal is to blast the missiles, and the offending planes, out of the sky. Enemy helicopters, missile-launching cars, and long-range missiles also act as hazards as the stages progressed. Each stage would introduce a few new enemies, and shuffle out some older ones that didn’t fit. 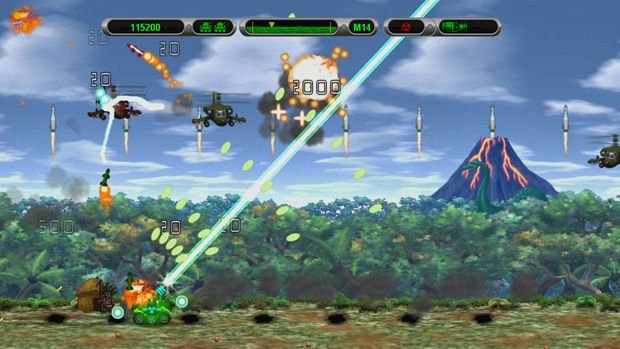 All in all, the game didn’t really present a challenge — up until I hit level 6, “Tanksylvania.” I ran into a brick wall with my progress, ending up spending some three or four hours on that single level. And I still haven’t beaten it. I couldn’t finish the game because of all the design problems that came to a head in the playing of this level.

The most immediate problem I faced was the atomic bombers. These crafts would drop three or four nuclear bombs as they crossed the stage — items that, if they touched the ground, resulted in an instant-kill. And these things took a lot of ammunition to actually shoot down. Meanwhile, there was a bevy of other ships dropping missiles, several of which would explode into ammunition that would be sent all over the screen, making it unavoidable to be hit.

Part of what caused that was sheer mass of shots that got thrown at me. This game is not a shoot-’em-up, and the hit detection proves that. There’s no way to dodge through the flurry of bullets that get strewn about, and yet too often I simply got stuck in situations where there was just no way out. It was akin to Metal Slug, but everything flew at you too quickly. Oftentimes, shots would simply get lost in the business on the screen, and all of a sudden my tank would blow up — and I’d have no idea why.

But the surprising culprit of my biggest headache was actually playing the game in widescreen. Because the game was in widescreen, more enemies were generated, they stayed on the screen longer, and thus fired more bullets. If you set your system into 4:3 mode, it apparently gets dramatically easier, but I wasn’t going to try that. So if I was on one side of the screen, and an atomic bomber appeared on the other side, it was nearly impossible for me to make it over in time and be able to destroy the bomb before it hit the ground. Oh, was it frustrating. 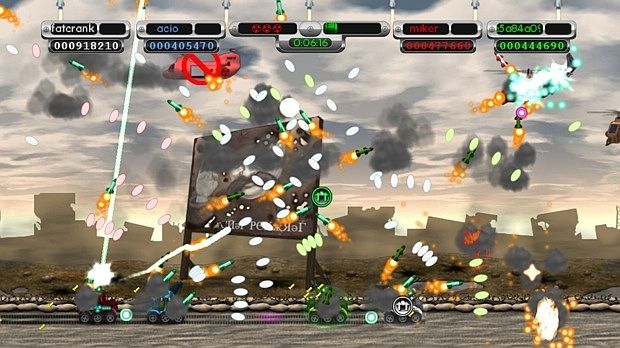 I eventually made it to the boss — with no lives and no shield left. The bosses are what you’d expect in any game of this nature: gigantic, well-animated, and deadly. Normally, I had no trouble dispatching them, as their weak spots were easy enough to find. Again, the busyness of the screen was my downfall. After I had eliminated all of its appendages, my tank blew up. I honestly couldn’t tell you why. It happened to me several times. I can only assume he launched an attack, and that’s what killed me.

So, giving up on that, I decided to try out some of the multiplayer mode with my friends (I had to complete the game in order to unlock the boss run mode). It’s a challenge to see how long you can survive, picking up an assortment of the power-ups given between levels. It’s alright, but not terribly exciting. I could point to any number of titles with better multiplayer options.

While the title may be tempting, I can easily tell you to avoid this one. Pick up any number of PSN titles, but this one is a must-avoid. If you’re really hungry for that arcade-style action, go pick up Metal Slug Anthology for the PS2. Or maybe even The Red Star if you want to punish yourself.

I like my downloadable games just like my coffee: black, no sugar and get that creamer out of my face before I put you through a wall, sir. In other words, I like them to be basic and feel familiar. I want to turn on the title and start playing as easily as I’ve slid my brown leather loafers on my feet for the last four years. Heavy Weapon: Atomic Tank foots the bill nicely; however, the age of the game shows.

Heavy Weapon is a multi-directional shooter on rails. You control a tank and move from side-to-side on a 2D plane in order to avoid constant aerial bombardment. The game advances through the levels for you. But as the name of the game implies, you don’t just avoid fire: you return it. The tank is equipped with a nasty gun that can strike foes at any angle — a simple flick of the right stick does the trick. While the little green balls service to deflect the bombardment of enemies — rockets, nukes, bombs, and lasers, oh my! — you’ll soon be finding yourself wanting more power: something the game readily provides by way of upgrades.

In game, a special plane drops power-ups that give your tank better shielding, rapid-fire abilities, and nuclear bombs. After a level is finished, you earn a point that you can apply to six unique upgrades that stick with your tank through the course of play. Stuff like chain lightning, solid laser fire or even defensive shielding is available, on top of whatever your normal gun has going on as a result of picking up the in-game drops. I view the robust upgrade options as a monotony breaker. Without them, the game would be a flat side-scroller. With the upgrades, Heavy Weapon turns into a highly customizable and chaotic side-scroller. 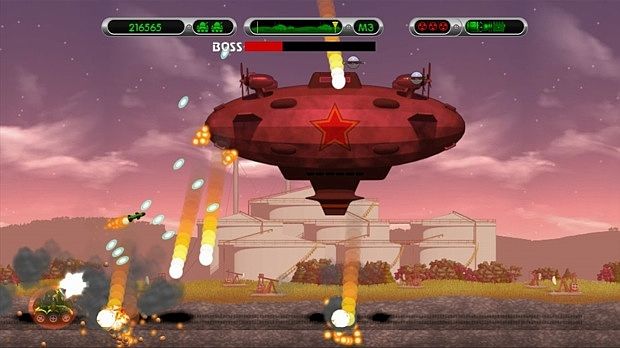 The word “chaotic” can also describe the amount of violence you’ll encounter after progressing to the game’s midpoint. The planes, helicopters, trucks and even enemy tanks you encounter begin to clutter the screen with their bullets, bombs, and physical forms. Your upgrades — especially the rockets — will add to that. While frantic can be fun, I found the amount of stuff on-screen frustrating at times. I never lost sight of the tank, but it’s easy to miss the stray laser bubble when attempting to destroy a nuclear bomb before it hits the bottom of the screen. A few missed laser bubbles or rockets can lead to an early Game Over and perhaps a tossed controller. However, the difficulty is measured — Heavy Weapon doesn’t default to “ridiculously hard” like several of its flash game brethren do.

At the end of each level, you’ll encounter a boss: another shining point in the game. Bosses provide unique challenges and are often hilarious. During my play I fought a war blimp, a mechanical monkey and zeppelin equipped with a human face — each equally rough, but rewarding when put down. Yet, however, rewarding, at times I felt I was playing nothing more than a glorified flash game. There’s simple and then there’s simple. The upgrade system twists the game just enough to make it more interesting than the fodder, but don’t walk into Heavy Weapon expecting something truly unique. It’s a multi-directional shooter. 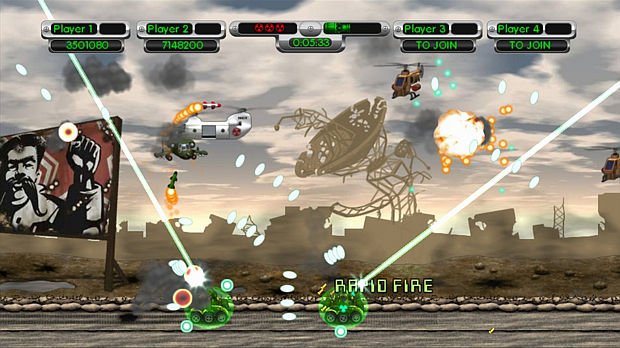 Heavy Weapon has a multiplayer component with two modes: Arms Race and War Party. In Arms Race, you can play with up to four friends in order to see who can live the longest amount of time in a level. In War Party, destruction reigns supreme: respawns are infinite and the amount of enemies on-screen is ramped up. It’s a mere slugfest with pals. Both modes add to the game, but you’ll find the amount of people available to play with on PlayStation Network lacking.

This is a solid game. The ease of play, robust upgrade system and mindless shooting should provide plenty of fun if you choose to download. But like my scuffed and worn loafers, the game is showing its age. The dated and redundant visuals, random difficulty spikes, screen clutter are examples of ancient design. Try out the demo first, but don’t be too afraid: Heavy Weapon is worth your time.

Final Score: 5.5 — Mediocre (5s are an exercise in apathy, neither Solid nor Liquid. Not exactly bad, but not very good either. Just a bit “meh,” really.)