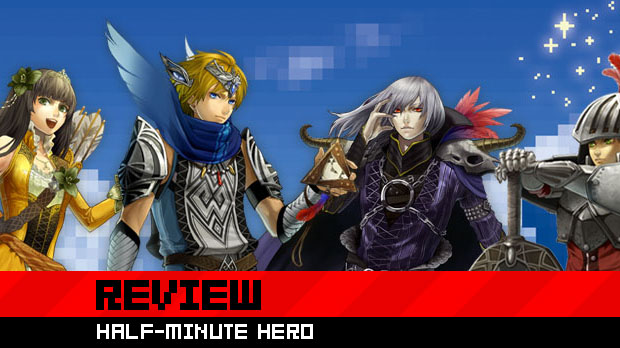 Roleplaying games are dramatic, lengthy affairs in which most players could reasonably expect to lose up to eighty hours of their time. Half-Minute Hero exists to tell you just how much you’re wasting your own precious and fragile life, as it reduces eighty hours of gameplay into a mere thirty seconds of content.

The scary part? That thirty seconds of content represents everything you do in an RPG. You grind, you do a fetch & carry quest, you buy a sword, you beat a boss, and you watch the credits. Half-Minute Hero seems to tell the player that all those massive, epic RPGs they’ve played over the years were little more than thirty seconds of gameplay, stretched to ludicrous lengths. It’s all very meta.

It’s also quite brilliant, as well. Read on as we review Half-Minute Hero.

Half-Minute Hero isn’t just an RPG. It’s also a real-time-strategy game and a fast-paced shooter. There are a variety of game modes and a surprising amount of content to be had. Hero 30 is the centerpiece, a vast collection of bite-sized RPGs in which a typical silent hero saves the world. Evil Lord 30 is an RTS in which players must summon monsters to destroy various targets, while Princess 30 is the shooter, as a princess and her knights charge from their castle to collect objects and return safely home, destroying anything they find along the way.

In addition to the three main modes, there are other unlockable games that can be discovered as players battle their way through the game’s many stages. There is also a four-player ad-hoc mode, but unfortunately, as with all PSP multiplayer games, the chances of gathering enough players could be very slim, unless you have a cadre of PSP fanatics who also happen to love the game you’re playing. I am not one of those people, sadly.

Evil Lord 30 and Princess 30 are relatively fun in small doses, but they lack staying power and don’t really feel all that compelling. You’re either just running around hitting a button to summon monsters or mashing a button to shoot crossbow bolts. Evil Lord 30 attempts a very weak form of depth by introducing a rock-paper-scissors element to the games, where different monsters are strong and vulnerable against different enemies. All modes also have the ability to reverse time by paying the Goddess of Time to rewind the clock.

Despite these attempts to spice the gameplay up, however, both Evil Lord 30 and Princess 30 feel more like silly distractions than real game modes. They’re fun enough for what they are, but definitely not worth buying the game for.

Hero 30, however, more than makes up for the other lacking modes. A mysterious villain is granting the world’s many and varied Evil Lords a “Spell of Destruction” that will allow them to destroy the world in thirty seconds. Players will have to do in thirty seconds what most other RPGs allow players to do in weeks. The game’s hero needs to level up, obtain weapons, complete sub-quests and solve puzzles in order to defeat each Evil Lord, and he only has a short amount of time to do it.

It sounds like a one-trick pony, but the game feels surprisingly versatile, presenting itself as more of a puzzle game than a single-gimmick joke. There is an extra level of depth with the Goddess of Time statue, found in most villages, that will reset the timer back to thirty seconds if the player has enough gold. This allows players more flexibility, and knowing when and where to reset time is crucial to success.

In addition to the main objective, each stage also has its own selection of optional sidequests and secrets. Going above and beyond the call of duty might result in some extra equipment, which is the only thing the player can carry from one stage to the next (every chapter sees the Hero start at Level 1 with 100 Gold). There are also branching paths which can be unlocked depending on the choices made in previous levels.

Hero 30 sometimes relies too heavily on trial and error, since sometimes it’s best to go into a level and scope it out first, learning what to do before having a second attempt. Despite this, the game manages to stay consistently fun and feels fresh throughout despite the repetitive premise.

More importantly than everything else, however, Half-Minute Hero has a sense of humor and finely crafted silliness that makes it truly memorable. It’s crammed full of self-referential jokes, with the game making note of its first recycled sprite, and questioning how a warrior can recover from major injuries after taking one shot of medicine. The occasional dab of bad translation and the overly simplistic retro sprites juxtaposed with their stereotypical anime counterparts just adds to the flavor, making Half-Minute Hero both a celebration and a brilliant satire of the JRPG genre.

RPGs have been on a severe quality decline for the past few years, stuck in a creative rut full of the same old ideas and the same old character archetypes. Half-Minute Hero is a game that was needed. It holds a mirror to the RPG genre and makes it look like a po-faced waste of time that’s in serious need of new blood and fresh energy. For somebody who has steadily grown sick of JRPGs and the same old routine that they bring, Half-Minute Hero is a breath of fresh air.