It’s likely that Disney Interactive’s Guilty Party hasn’t been on your radar, despite being announced earlier this year. For the core Destructoid audience, it’s got a whole bunch of things working against it, including having the word “party” in the title and the phrase “50 fun mini-games” appearing on the back of the box.

I can’t blame you, but developer Wideload Games’ Guilty Party is more than it appears on the surface — it’s a modern day (and admittedly more casual) take on the classic board game, Clue (or Cluedo to folks outside of North America). With a shocking amount of replay value, polished presentation, and plenty of character, Guilty Party may be the one “party” game you’ll want to add to your collection this year.

Guilty Party introduces players to The Dickens Detective Agency, a ragtag family of sleuths tasked with solving a multitude of crimes perpetrated by their arch-nemesis, Mr. Valentine. The game features a full-on story mode that can be played with up to four players cooperatively, including drop-in and drop-out play. You’ll be able to choose from one of the six Dickens detectives, from a diminutive-but-deadly kung-fu granny Charlotte to the more classic, Columbo-like gumshoe.

The game throws players into a crime scene, presented as a large dollhouse-like cut-away made up of various rooms. Players take turns in the investigation, using tokens to move from room to room, interrogating witnesses (and potential suspects) and examining clues. During the investigation, you’ll gather evidence to help you build a sketch of your suspect, broken down by four traits — hair length, gender, weight, and height. Once the evidence has been gathered, you’ll then be able to make your accusation, piecing together the damning evidence and outing the villain. 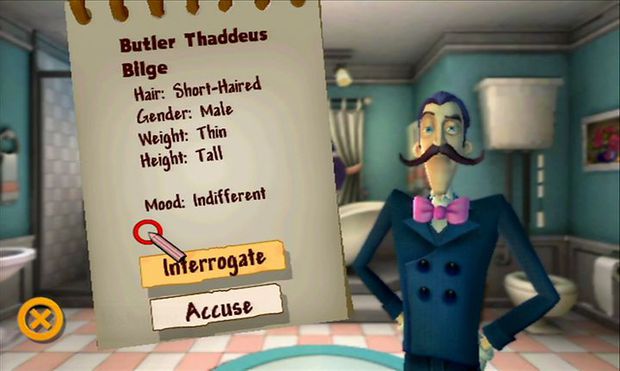 How you get these clues is arguably the game’s weakest point — these are those “over 50 mini-games” I had mentioned earlier. Most of these are standard stuff, like waving a Wii Remote around or shuffling on-screen pieces of paper around to uncover clues. Initially, these games start off extremely simple, with nothing more than some waggling or button mashing doing the trick. But as you increase the difficulty (unlocked when the game figures out you’re not a complete moron), some of the games can get tough, layering on complications to keep you from your goal.

The good news is that these mini-games are just a means to an end, and the brief time you’ll spend doing them gives things a more WarioWare feel. Wideload also does a decent job of having the games match the story and characters, which keeps things pretty entertaining. Guilty Party also features cooperative mini-games, where players must work together. Hininx, as they say, ensue.

But the real fun here is actually solving the mystery, and while on the most basic difficulties things are spelled out for the player, you’ll have to put on your detective caps on the hard modes. Clues become more ambiguous, giving you only hints about the traits of the culprit, forcing you to use your head and to think outside of the box. Particularly when playing with others, it’s great to kick around theories as to what certain clues can mean, and the collective “ah-ha!” moments that result always feels great. 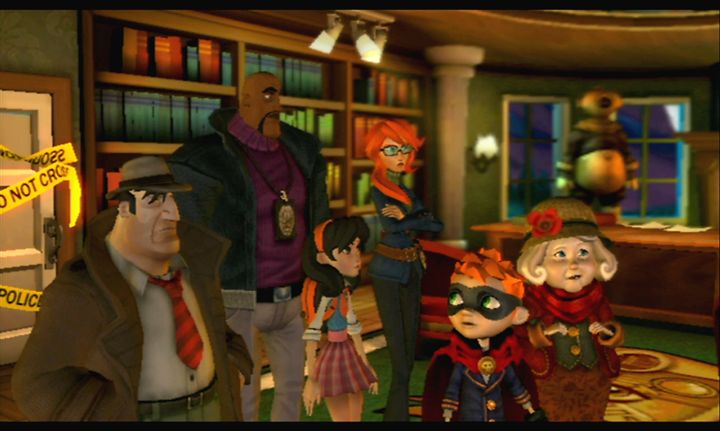 The story mode is relatively short, and can be completed in around five hours. It’s the game’s Party Mode, which takes the game’s canned cases and shakes all the variables around in a box, that will have you playing Guilty Party for months to come. The randomized cases (including clues, mini-games, suspects, and outcomes) will leave you guessing every time.

If you’re more of a competitive snoop, you’ll also be able to play head-to-head against other detectives in solving these randomized mysteries. Here, players race to crack the case, with each given the ability to trip up other players with tricks, traps, and even obscuring evidence. Basically, you get to be a pain in the ass, which is always a blast. 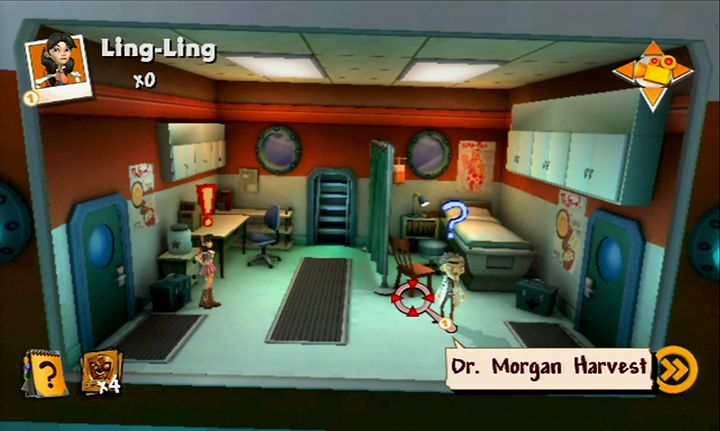 Wideload has to be complemented for creating a new intellectual property with some serious character and style. It’s not wholly originally in look or feel (there’s a pretty big Sam & Max vibe here) but it’s polished to a shine, with some hilarious dialogue and clever design throughout. The game’s theme song also deserves a nod; there aren’t many games that feature an original vocal track that you’ll have stuck in your head for days.

Despite some sticking points in the mini-game department, its quirky personality and replay value make Guilty Party one of the best multiplayer party games to hit the Wii.  If you regularly play games with your family or friends, Wideload’s “whodunit” shouldn’t be missed.

Score: 8.5 – Great (8s are impressive efforts with a few noticeable problems holding them back. Won’t astound everyone, but is worth your time and cash.)