Jeff Minter’s Gridrunner Revolution is a good game, and I say that as someone who absolutely hated Space Giraffe.

I have no time to play the coy, “these are the opening paragraphs so I don’t want to spoil my opinion of the game in a cynical attempt to make you hit the jump and read further” game. The name “Jeff Minter” conjures too many overblown emotions far too quickly for such tiptoeing to be of any use.

I legitimately worry that many gamers who, like me, couldn’t get into the obfuscation-based gameplay of Minter’s previous work will take one glance at Revolution‘s screenshots and brush it off as another nausea-inducing head trip not worth their time. I legitimately worry Space Giraffe‘s legacy will drive people away from a game that, unlike Minter’s Xbox Live-game-that-couldn’t, does a superb job of slowly acclimating the player to an entirely new method of seeing, experiencing, playing, and thinking about what initially seems to be a pretty standard shmup.

So, yes. You now know that the game is really quite good, and that you should give it a chance (demo’s here, though it doesn’t represent the intensity of the later levels) regardless of how you feel about Jeff Minter. If you want specifics, you can hit the jump and I will attempt to provide them. 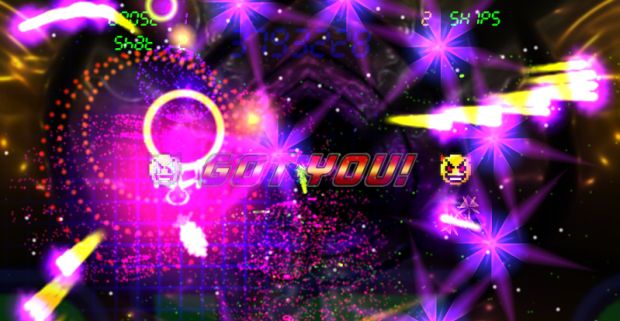 Gridrunner Revolution is a game about discerning order out of chaos. It is a game about being completely overwhelmed, yet triumphing through a keen knowledge of the game mechanics. It is a game about using gravity wells to redirect bullets and create literal walls of death. It is also a game about getting shot, and bouncing off your enemies like a sentient pinball until you can grab a flying sheep and save your ship.

It may take a while before you get to play that game, granted, but it’s there nonetheless.

Starting with the bad, just for the sake of it:

Revolution‘s learning curve seems to be designed for people who really, really, really didn’t understand Space Giraffe. Roughly the first half of the game is utterly without challenge, seeking instead to acclimate the player to the kookily unusual game mechanics without actually requiring the player to use them to survive. You’re meant to use the first two difficulty tiers (Korma and Mudchute — good to know Minter’s love of curry is still intact) to slowly learn and understand how the gravity wells, different ships, and “sheepie save” mechanics work, but it’s far too easy to just mindlessly and repetitively blow past the levels by playing them as you would any other shmup: point your ship in the direction of the bad guys, avoid their shots. Ba-da bing, ba-da boom. For literally about fifty percent of the game’s running time, since you can’t just skip the easier levels.

As a result, it can be somewhat difficult to figure out when you’re playing the game “well.” In the much, much later levels, you can easily judge your own skill against how often you die, but for much of the game I couldn’t help but feel a little confused about whether or not I was being as cool as the game wanted me to be. 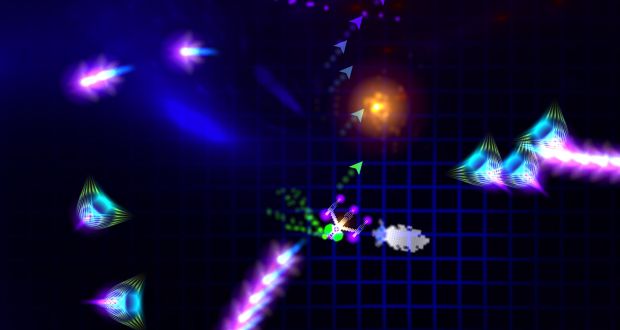 Say what you will about Space Giraffe, but you knew when you were playing it well; clever exploitation of the “bulling” mechanic resulted in an audiovisual orgasm in the form of mooing cows and the oh-so-satisfying sight of watching your enemies fly off the grid-board-thingy before exploding in the air. In Gridrunner Revolution, the aesthetic feedback for unimaginative play isn’t much different from when you learn to curve bullets around black holes and suns, creating a perimeter of constant fire that annihilates anything that stays on screen for more than a few seconds. The coolness of the mechanics is always there, but it never really forces you to confront it head-on until the “Vindaloo” difficulty.

But once you do reach the harder levels? The game becomes something goddamn special.

You’ll be forced to learn the ins and outs of every single ship under your command, all very different, and all of which can be easily switched between with a simple roll of the mouse wheel. You’ll learn to utilize their different firing patterns to create oddly poetic streams of bullet hell that soar through and around the numerous suns and black holes which alter their gravitational course.

You’ll see an entire screen suddenly fill up with bullets and enemies in numbers that might make you wet yourself in any other shmup, only to clear the entire screen in a few thrilling seconds as you dodge and weave, rotating your ship this way and that while bullets automatically stream from your front and rear. 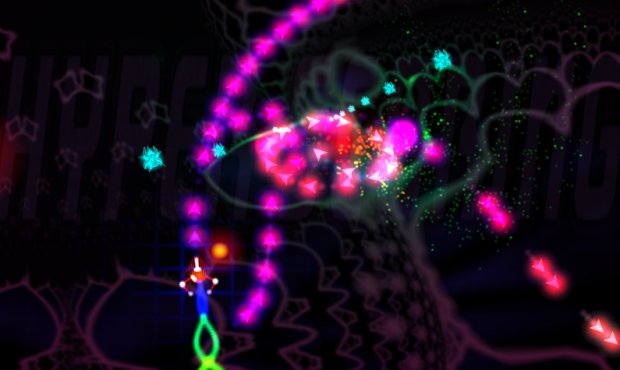 You’ll learn not to feel disappointed when an enemy ship crashes into yours, because this means you’ll get to experience one of the most enjoyable parts of the game: trying to keep your ship from falling off the bottom of the screen by bouncing it off enemies and bullets until a sheep powerup falls into view and restores your life.

I’d feel silly classifying Gridrunner Revolution as anything but a shooter, yet it doesn’t necessarily feel like any I’ve ever played: your ship fires bullets automatically and your enemies almost never fire back. During its best moments, Revolution feels less like a shmup and more like — and I know that by saying this, I will sound like more of a toolbag than I usually do — a psychadelic ballet. The visual noise never gets up to the level of Space Giraffe‘s later segments, but there are certain moments when the entire screen fills with weirdly colored enemies against a lava lamp background, and the destructible sun that appears at the start of every level starts belching out dozens of bullets, and yet you’re still able to make sense of it all.

On a random note: I am colorblind, and could not get past the halfway mark of Space Giraffe. Conversely, I had almost no trouble making visual sense of Revolution‘s levels apart from some alternating red/green laser gateways. When I died, I knew exactly why I had died (or at least, I had a pretty general idea).

For those who didn’t like Space Giraffe, it often felt like the ones who did had been brainwashed into seeing a game which was not there — a game where the intentionally confusing, overly loud audiovisual elements somehow coalesced into a weirdly transcendent experience on par with taking LSD and listening to Bach. I never understood what Space Giraffe fans got all excited about, until I made it to the more intense levels of Gridrunner Revolution. I can only liken it to the process of playing, and getting really good at Bit.Trip Core, except with more nonlinear, less pattern-based gameplay. 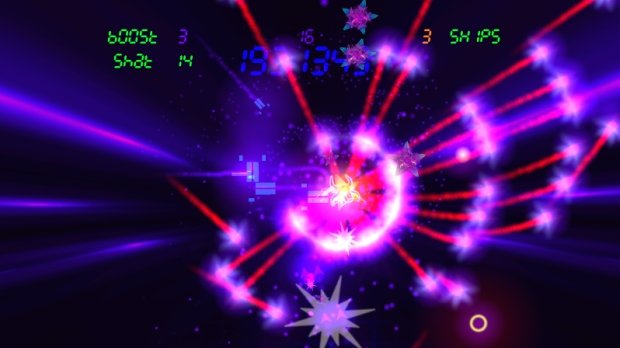 Ultimately, while Gridrunner Revolution may take far too long to get to the really good stuff, and though it may often lack clear player feedback, it is unquestionably worth your time. Its weirdly entrancing-but-ugly aesthetics will make you (however temporarily) regret the awful things you said about Jeff Minter after failing to beat level 40 of Space Giraffe, and its elegant, sort-of-shooter mechanics are as addictive as they are unusual. Whether you’re a longtime Minter fan or have ever considered hurling a brick through the guy’s window, Gridrunner Revolution is unquestionably worth your time.