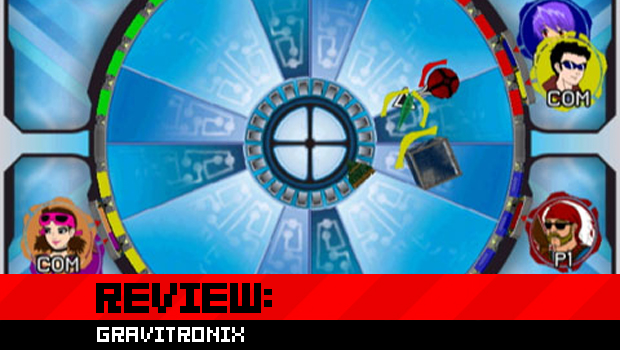 Rght around the time that WiiWare was just becoming known to the public, a little company in New Hampshire called Medaverse Studios announced that they would be jumping in on the fun with a game called Gravitronix. About a year and a half after the initial release expectation, the game hit the service a couple of weeks ago.

I’ve spent some time with it and my thoughts on the game are written below the fold. I’m not going to lie to you, it isn’t particularly flattering — either to me or to Medaverse Studios — but I think I made a joke in there which might have been funny.

Gravitronix is essentially a game of air hockey with more complex strategy. Playing on a circular field, the goal is to protect your quarter of the circle from drifting objects while forcing same objects through your opponent’s. Lying between the floating geometric shapes and the goals are two means of defense: a paddle which can catch and fling back the detritus and a shield which diminishes as it takes hits. If ever an object makes it past both, the player who is penetrated loses.

Your ship’s functions are simple and controlled with two buttons. One button sends out a repulsor beam that pushes back against oncoming objects. The other is a tractor beam which holds on to them. Once held, these objects can be charged up, causing them to move more quickly in the direction they are launched and powerfully explode upon impact with a forcefield or another object and you can aim the path of the projectile.

Moving your ship, on the other hand, utilizes motion controls. Twisting your Wii Remote or Nunchuk will slide your paddle clockwise or other in corrolation with the movement. It feels a little gummy at first and takes getting used to.

The objects have differing properties depending on their shape. Larger shapes move more slowly in general but deal much more damage when they hit forcefields. There are four types of these geometric shapes to contend with and, as they get bounced around without colliding, they increase their speed over time.

It’s chaotic but it is not fun. Keeping track of everything on the playfield is difficult and you’re likely as not to spend most of the game only seeing what’s going on in your quadrant as you fend off oncoming objects. This makes the single-player mode incredibly boring, as it comes down to just keeping yourself defended, throwing back everything that comes you way while you wait for the AI to screw up.

The game is also really unattractive, in terms of both video and audio. Gravitronix’s geometric objects are all rendered in 3D but almost everything else looks like it was whipped together in MS Paint and neither of them look particularly good. Likewise, the music and sound effects are bland. Worse yet are the victory exclamations given by a winning player, which are more stiffly delivered than was the coffin at my grandfather’s funeral.

Multiplayer games are a little more entertaining, but not by much. The games run longer (simply because the AI is often incompetent) and it’s less of a surprise when you’ve won, but I couldn’t recommend the experience for someone else. There’s simply nothing compelling about the game to encourage more than an hour’s worth of play.

It is a shame, as the simplistic controls are accessible despite the slight learning curve and games can have up to eight players working in teams of two using four Wii Remotes and Nunchuks. The idea has merit, but the actual end result is a boring, ugly mess that offers little.