Usually, most declarations of one game genre or another being “dead” are just hot air. That said, such sentiments are probably closest to truth when applied to space games. Space games are somewhat rare, just a few titles standing out of the pack. Gamers with a lust for giant starship fleets pounding the crap out of each other with shiny beam weapons and screaming missiles are ill-served these days.

Thankfully, it seems that Cliff Harris – sole developer at Positech Games – felt that burning desire, much to the benefit of would-be space cadets everywhere. Read on to find out if his efforts satisfy that hunger. 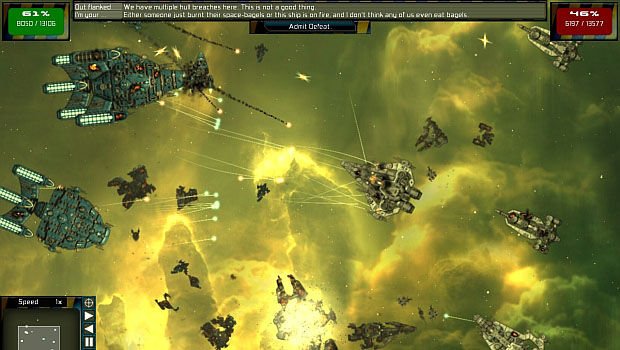 Gratuitous Space Battles‘ raison d’etre is probably best implied by its own title. Its primary purpose is to provide fans with as much epic space battling as they can handle. While there are games out now that can bring hot fleet action to the table, but their ship combat is – for better or worse – couched in far too much game. Extra elements like diplomacy, economics and online virtual worlds “distract” from seeing metal death machines explode in poetic fashion.

Its core concept is straightforward: take two fleets, jam them full of heavily armed ships, and throw them at each other to slug it out. There’s no need for complex objectives, scripted events, base-building, mission briefings or even an overarching fiction. It’s all about blowing sh*t up…in space!

At first glance the game is relatively simple, and blends elements from real-time strategy and tower defense. Unlike most RTS games though, Gratuitous Space Battles actively prevents the player from micromanaging combat. In fact, once the ships are under way, all you can do is sit back and watch the fireworks. The game’s depth lies primarily in the steps leading up to the actual encounter. 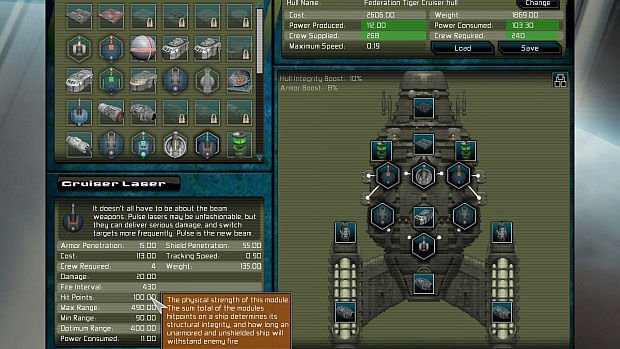 Players must design the ships that will fight for glory in the depths of space. Thankfully though, they won’t need a degree in CAD or space engineering to get going, and the process mainly consists of selecting one of many pre-designed ship hulls and deciding which snazzy space components go where, balancing power needs with crew requirements and other attributes, like weight.

Once all the ship designing is over, the only remaining task is to assemble a fleet and deploy it based within a preset budget. Finishing battles under budget earns bonus “honor points” which can be used to unlock more parts, playable races, and ship hulls. Basic AI “orders” can be assigned to govern ship behavior. Once combat is underway however, it’s all hands-off, with the player only capable of controlling the camera and speeding up or slowing down time. Victory is determined by everything you did before contact.

For a title designed to run on low-end computers, Gratuitous Space Battles brings a lot of flash and thunder to every battle. Presented from a top-down perspective, precisely detailed ships send off swarms of missiles and rockets, and fire shiny glowing death rays, burning off bits of enemy hull armor and breaching hulls in an utterly satisfying manner. Fighters maneuver across the field, wheeling about and performing strafing runs in the face of larger ships’ point-defense systems and fast firing lasers. Rather than the quiet, intense dogfights of shows like Battlestar Galactica, the game channels the space warfare of Babylon 5, Star Wars, and Legend of the Galactic Heroes, all lumbering capital ships, huge explosions and dramatic slugfests. 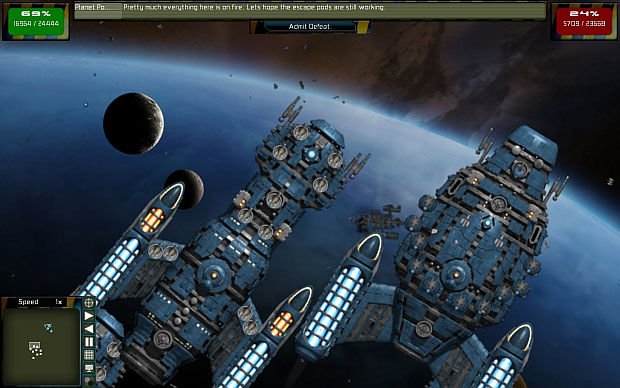 However, the game’s greatest asset isn’t so much its technical prowess or innovative design (though it has both), but rather its clever, tongue-in-cheek sense of humor. Every ship component comes with a descriptive tooltip written with a knowing love of geeky cliches and tropes, crafted to draw giggles and winks from any fan of science fiction. Below is a faction description that displays some of that cheeky creativity:

“The Rebels are a collection of species that once formed a part of the Galactic Empire, but broke away due the harsh demands of the Empire for ever greater sacrifices in terms of military commitment. The Rebels reasoned that the only way to ever be free of a lifetime of military service for the glory of the Empire was to dedicate their lives to fighting against them. As a result, today’s modern Rebel Alliance contains the majority of the irony-resistant species in the galaxy.”

That self-awareness permeates the whole game, from the descriptive tooltips to the ship status radio chatter, to the manual.

Speaking of the manual, that’s one thing players need to read before diving in. Gratuitous Space Battles doesn’t explain itself very well, simply handing you a set of “tutorial” designs and sending you on your way. The tutorial designs themselves aren’t really effective beyond the tutorial, and to survive one will need to start designing new ships straight away. Components and weapons are a mass of statistics and details that all hold at least some degree of importance. Compounding the lack of information is the fact that one cannot tell the enemy’s fleet composition before battle, besides the size and formation of ships present. While this is a deliberate design decision, it turns the game into a sort of exercise in trial-and-error, wherein the fleet you design either steamrolls (or is annihilated by) the enemy fleet, sending you back to the drawing board to find out how everything went wrong (or right).

The idea behind it, of course, is to use the battle’s visual feedback to develop new tactics for use the next time around. Unfortunately, there’s not quite enough of that critical visual feedback to provide a more precise, specific way to tell what was being shot at you. Postmortem statistics pages do help, but the process doesn’t come as intuitively as it could. 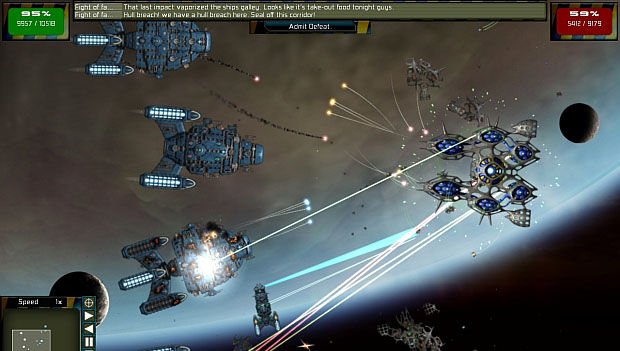 Perhaps the game’s greatest flaw is a lack of balance in the single-player mission mode. It’s far too easy to just ignore frigates and fighters, settling to drop large mass of heavy capital ships, eventually winning by way of attrition. It doesn’t feel as rewarding to use complex AI routines, diverse ship selections or elegant formations, making it harder to learn those new tactics that keep sessions fresh, especially once multiplayer comes in.

The real joy of Gratuitous Space Battles’ multiplayer is the resemblance it bears to old-school “snail-mail chess” games. Players can construct their own customized fleets and post them up as “challenges” that others can test their own setups against. There’s a great feeling that you get when your complicated, subtle formations and sublime ship designs flatten an enemy fleet, as if to say “Hah! Is that the best you could come up with! What kind of grand admiral are you?!”

In the end, for all its talk of being “gratuitous,” Gratuitous Space Battles is actually quite a lean, mean game with a unique premise and singularly charming personality. If you’re even marginally interested in seeing heavily armed tin cans tear each other a new hull breach with beam lasers and torpedo missiles, give it a try. You can grab a demo here.