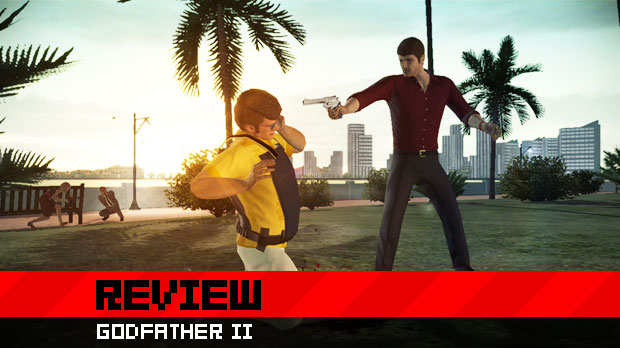 While Electronic Arts’ Godfather II shares a name with the 1974 film, it’s a bit unfair to compare the two. Francis Ford Coppola’s sequel is widely considered one of the greatest films of all time, picking up six Academy Awards, including one for Best Picture. So right off the bat, the bar and expectations are set astronomically high.

Sure, the game shares similarities in plot points, key characters, and number of olive-skinned people with dark hair getting shot. But Coppola’s Godfather sequel is a masterpiece in the world cinema, and EA’s game doesn’t quite meet that mark among games … though that doesn’t necessarily mean it should be overlooked.

Godfather II picks up four years after where the first game left off. Following the death of New York Don Aldo Trapini, players take control of Dominic. As a high-ranking soldier in the Trapini family, Dominic is now thrust into the position of Don. Working alongside other NY families, players are tasked with re-establishing control of New York City, Miami, and eventually Cuba. Of course, it’s no easy task; with other families standing in his way, Dominic must extort, shoot, bomb, and coke his way to total criminal supremacy.

The title relies on quite a bit of what was established in the first game, with a third-person open world structure that relies on the now tried-and-true Grand Theft Auto formula. At its core, Godfather II is mission-based, taking errands from various family members and then using the nearest car (any car will do – just take it!) to get to and from your destination. The “Blackhand” close-combat control bits are back with a few tweaks, allowing you violent pummel anyone isn’t particularly cooperative. (In the PlayStation 3 version of the game, you can use the SIXAXIS/DualShock 3 to slam or lean enemies.)

What really sets Godfather II apart from its predecessor is something called “The Dons View,” which adds a strategic element to the gameplay, one which might overwhelm players looking to simply drive around and shoot people in their faces. At the press of a button you can get an overview of the city which details different business and territories. As it’s your goal to establish the most control, the 3D map will specify who owns what, and other key points of interest.

Gaining control over a business is as simple as going in, clearing out any rival families, and then forcefully convincing it’s in the owner’s best interest to pay out to you for, uh, “protection.” In Godfather II, you’ll have a little help along the way, as it also introduces the ability to hire crew and family members, up to three of which can roll with you at any given time. Here’s where things can gets a little complicated, a characteristic that could make or break the Godfather II, depending on what kind of player you are.

Each family member you hire has his own specialty, like safe-cracking or arson. Choosing your crew wisely is key, as there will be some areas of the game you won’t be able to access without rolling with specific specialty types. The team can also be upgraded (using cash you earn from controlling territories or side-missions) in both skills and equipment, as well as weapon licenses that allow them to carry more powerful firearms.

You have a few options with your crew – have them roll with you (note: even if you leave one behind, they’ll use mob-magic to appear at your location, regardless of where you go), try to defend a business, or to try to take over a business. Between you and your crew, you’ll have to juggle trying control crime rings or bomb enemy businesses to break up rival families resources. You’ll have to use your own resources to invest in paying guards to protect your own businesses, using a detailed view of your daily income to determine how much you’re willing to pony up for.

You’ll have to do various favors for everyone from ordinary citizens to crooked politicians to gain influence, money, vital information on how to kill a key member of a competing family. You’ll also have to decide which string of business (or crime rings) you’ll want to focus on owning, as different rings will offer your family different bonuses.

On paper, it sounds great — an open-world style game with deep strategy to compliment the game’s competent third-person shooting. In practice, there’s quite an overwhelming and intimidating learning curve. Over the course of the game’s first two or three hours, you’re bombarded with layer upon layer of things you’ll need to consider as you play. Expecting a more straight forward experience, I’ll admit I nearly tuned out at first; it was simply too much. But after a few hours of play, I came to grips with the sometimes slightly frustrating micromanagement the game asks you to do, and stepping into the role of the Don wasn’t as much of a hassle as I had first thought.

This is mostly due to the fact that the “Don’s View” offers up a ton of information, which — once you understand how to navigate it — will become one of your best resources. It also helps that some of the tasks become streamlined with context-sensitive shortcuts; for example, after taking over a business, you can press start and immediately be brought to the screen that enables you to manage guards for that property. Unfortunately, sometimes it doesn’t seem streamlined enough, as the Don’s View is still cluttered with puzzling information, small text, and overwhelming tasks that can take away from the third-person action experience.

For better or for worse, despite all of the little details the game asks you to pay attention to, controlling business was usually as simple as going in guns blazing, and then smashing some poor schmucks face in until he surrenders. In fact, while it’ll take you a little over 10 hours to complete the game’s main story line (ignoring most side missions to earn upgrades or cash), it’s not terribly difficult to have your family rise to power. Fortunately, the story that’s delivered is relatively engaging, and the third-person action (a huge chunk of what you’ll be doing) is fun, if a bit monotonous.

To extend the game’s life, Godfather II also features a few entertaining multiplayer modes in which you’ll control one of your family’s henchmen. Team Deatmatch is standard team-versus-team fare, but modes like Demolition Assault (using a demolition expert to destroy specific objectives) and Fire Starter (using a team arsonist to light things up for points) are enjoyable and imaginative diversions from the standard game. Cash won in multiplayer modes can also transfer over to your single-player game, and some weapon licenses can only be obtained in these online modes. This should give players a reason to hop online, but it should be noted that I was able to complete the game just fine prior to even setting a virtual foot in an online game.

Fans of the first Godfather game will definitely want to take a look at the sequel, with the caveat that the extra layer of Don’s View depth and the strategic learning curve may turn some people off. It’s also not the best looking game, and it’s certainly not the most engaging. But it’s a fair bit of fun if the idea of shooting fools in the face — when choking them just doesn’t work — appeals to you.