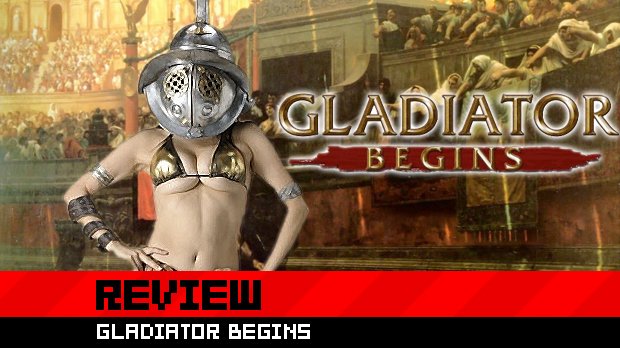 So, for some reason you’re still reading after that introduction. I guess that means you’re genuinely interested in Gladiator Begins, or that you’ve been tricked by the clever marketing that involved a half naked slave girl in a big helmet. I say tricked because you fell for one of the oldest tricks in the book. Titties. Luckily you may have stumbled upon an almost decent PSP game. I said “may have” so you’ll have to actually read this review to see if it’s a pile of crap or not.

By the way, my character’s name is Sagat. You can see a picture of him above.

I found it very hard to care what was going on in this game, mostly because of the god-awful presentation. There are people that want you to protect senators from assassination, a woman who wants you to kill her ex-lovers, and a gladiator encouraging you to go all the way to the top and earn your freedom like he did. Once in awhile you’re even able to choose between two different dialogue options! The problem is the stories are all told through on-screen text and talking torsos that grunt and groan their emotions at you. It’s not only dull, but after playing something like Peace Walker, it’s a disappointment. If I wanted to read a book, I’d go to the library. Instead I made up my own story featuring our hero Sagat who’s training so that he can win a time machine, go to the future, and be strong enough to fight Ryu. I’ll let you know if I write a full fan fiction.

The real reason people are going to pick this up is because they want to cut off someone’s head and then feed them their still-beating heart. Well combat isn’t that gruesome, sadly. You’re given tutorials over the first few days that teach you the different layers of combat. Blocking (which never works right), countering (which I gave up on almost immediately), and the only thing you really need, the different types of attacks. You can attack high, low or to either side of the character. Attacking one spot frequently enough will cause an opponent’s armor to fall off, making that spot extremely vulnerable. Most of the time I would spam the one-two combo, which you can do infinitely, and the second my opponent was vulnerable, unleash a flurry of heavy attacks. It seemed like they wanted to make a deep mechanic, but failed; instead, you’re running in circles around your enemy until you can stab them in their vulnerable rib cage. It’s not very deep and sometimes you’ll be pummeled by three enemies in a corner while you try to run away.

Your body armor can also fall off, which means that by the end of a fight there’s so much shit lying in the ring that you’ll be tripping over pieces of armor as you’re hit. If you happen to have your sword and shield knocked off, you can pick them up and continue fighting but don’t pick up the wrong item with the wrong hand. If you accidentally switch which hand you were holding things in you’ll start attacking with your shield instead of your sword. To put it lightly, that’s stupid. I have a sword and a shield. I don’t care what hand it’s in; just stab the guy. If a helmet and sword are next to each other, you’ll sometimes pick up the helmet and be forced to use that as your main weapon. I get what they were trying to do, but it doesn’t work and should have been scrapped. Don’t worry, you’ll still breeze through the game.

All of the characters look great and one of my favorite parts of the game are all the different outfits you can outfit your gladiator with. Sagat is currently decked out in a Primus Palus Cloth A, a Centurion Galea, and is wielding a Saber with an attack power of 31. He not only looks like a frigging bad ass, but his equipment will eff you up. The only time you really get to enjoy this is when you win a fight and do your victory dance, but it’s still so cool seeing your gladiator all decked out with the awesome equipment you’ve taken from your dead opponents.

The environments leave a lot to be desired. For the most part, you’ll be fighting in a sandy ring with up to four other combatants. I think I can forgive them for having a dull environment, because it makes you focus on your enemies and where you plan on stabbing them… repeatedly. The only time you’ll get a cut scene of any kind is when you fight a boss-type character one on one. Sagat, or whatever you name your gladiator, will walk up to them and do a mini-fatality such as chopping off their head with their shield. This should have happened more frequently, and each weapon should of been given multiple mini-fatalities. It’s your reward for winning! I want to see some variety darn it.

If you’ve ever seen the HBO series Rome, which I have and loved, you’ll find something oddly familiar about the tunes that play. They don’t play frequently, but when they do there’s definitely an influence to the point that I think some of the songs were deliberately made to sound similar. The only other noises you’ll hear are clanks of swords, grunts and groans during the cut scenes, and a “blarrrgghhhh” from your character as he raises his hands in jubilation for being able to spam the one-two combo. Way to go Sagat, you defeated a mentally inept AI. Way to go.

It was so easy that I thought I was going to breeze through the game until I hit my first boss. Suddenly, I had to implement my “run in circles like a jackass” tactic, which worked flawlessly. Bosses will beat the crap out of you, not because they’re stronger, but because they’ll be 10 times faster than you. If they get you against a wall, they can do some serious damage. So, to combat this I would run in circles, let my opponent use up all of their stamina and then go in for the kill. This worked so well that I was able to finish off a few bosses so quickly (one in under 20 seconds) that I was rewarded with Sagat stumbling to the ground as though he was hurt with what I’ve dubbed “failure music” playing in the background. If you don’t please the crowd enough, then the game says your performance was “pathetic” or “forgettable.” So even though you won, your gladiator falls to the ground. Screw that; I just kicked that guy’s ass in 30 seconds. If you don’t like it Rome, you can go suck on some olives.

If a buddy of yours also has accidentally purchased this game, then you can enter the Battle Arena and go head-to-head against each other. You can also go into the arena and choose which battle mode you would like to partake in. Everything from the campaign is available, including team battles, and two-on-two. Anytime there’s another teammate in the ring you’re going to be stumbling over each other, so make sure you only take on the guys who come after you. Let the other two guys beat on your teammate until you’re ready for them. If you get really frustrated with your teammate, just kill him.

Aside from the Battle Arena, the only reason you’d come back is if you’d liked the game enough to create a second character. Well, after jamming on the “O” button for a few days, I can say that I’ve had enough. It’s not a short game, so you’ll definitely be getting your money’s worth in that aspect, but that’s assuming you don’t get sick of it in a day or two.

In the end, here’s what you get: a brawler with a weak combat system. Had the combat been tighter, then perhaps I could have given this a glowing review, but when the heart of a game is flawed, all of the other components are going to suffer. This isn’t a game that will be talked about for ages. It’s a game that will drift from our memories and work its way into bargain bins worldwide.