Galcon, it has to be said, is one of the best iPhone strategy games on a platform overflowing with them. Winner of the 2009 Independent Games Festival award for Best Mobile Game, Galcon — developed independently by a single dude — was recently updated and ported for the PC.

But is Galcon Fusion worth a buy? It’s got a whole host of new game modes and prettier graphics, sure, but should iPhone-less strategy fans be excited? Should fans of the iPhone version bother buying this indie darling a second time around?

Hit the jump for our official review. 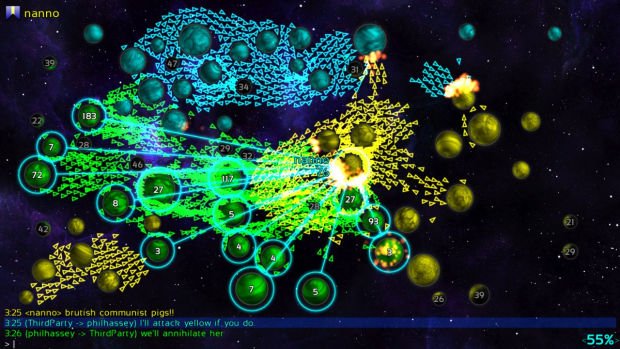 The iPhone version of Galcon is, without question, one of the most enjoyable games in the entire App store. Fast-paced, intuitive, and visually excessive, it’s a fantastic mobile strategy experience.

Emphasis, sadly, on the word mobile.

Apart from some prettier graphics and new game modes, Galcon Fusion plays identical to its predecessor. Up to twelve players fight for control of a single screen full of planets; each planet occupied by a player automatically creates units over time, and you can only take over another planet by making sure your invading forces outnumber its defending forces. Since your units are created really fast and the map is pretty small, you’ll find yourself embroiled in some pretty huge fights, pretty quickly.

As your only actual input concerns deciding how many units to send to which planets, Galcon is as easily understood a strategy game as I’ve ever played. There’s no dicking around with resource management, or unit upgrades, or base building: it’s just your units, your enemy’s units, and the map. Within thirty seconds, you might have four hundred units to your name. Within forty seconds, you’ll watch in empowered glee as the screen fills with a flood of your bright neon fighters, speeding toward one of your foe’s planets. The words “think fast” have never seemed so appropriate. 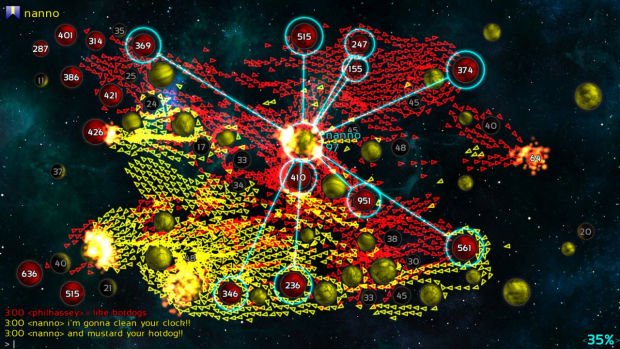 While Galcon can provide a lot of entertainment on the mobile platform, however, it feels out of place on the PC. On the iPhone, the fact that games only last about sixty seconds was a plus: in the time it takes to finish brushing your teeth with one hand, you can conquer an entire galaxy with your other. On a proper computer, however, the very simplicity that makes it such a fantastic mobile game also makes it an awkward PC experience.

It’s one thing to be simplistic when lousy tower defense games and farting apps are your main competition; it’s another to compete for my free time when (A) I’m sitting in front of a computer, and thus have a heck of a lot of it and (B) I have easy access to much more complex, protracted strategy experiences like Civilization or Empire: Total War.

Not to suggest that Galcon is inherently better or worse than those games — it’s just different, and suited to a different environment than what the PC generally provides. Galcon Fusion requires a great deal of strategy, but its fast pace and simplicity meant that after about five or six games, I’d generally had enough. To sit at a PC is to dedicate oneself to prolonged play, and Galcon is simply too intense for that. In the span of a minute you’ll watch an entire empire rise and fall, see gigantic armies clash on a few key locations, and feel the intense stress of realtime unit management while trying to predict your enemy’s next move. It’s like playing Risk at 300 mph; it’s strategic and satisfying, sure, but finishing a match is like stepping off a roller coaster. It’s an exhausting experience, and tough to endure for long stretches of time. 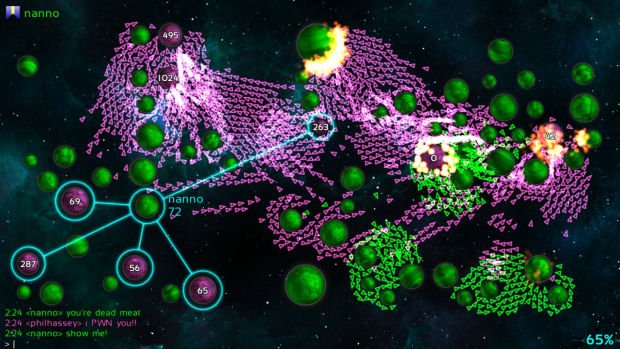 If there is one thing about Galcon Fusion that works better on the PC, however, it’s the multiplayer. I haven’t had a single problem setting up or joining matches since the game’s release, which is more than I can say for the mobile version. The match browser is clearly organized and informative, making it remarkably easy to find the sort of game you want to play. Though the singleplayer mode includes a host of difficulty levels, there’s nothing like playing Galcon against another living person, in realtime. The presence of another human makes a tense experience even more nerve-wracking; at any moment the screen might suddenly explode with your opponent’s ships, and you’ve gotta be ready. Being able to type “FFFFFFFUUUUUUUUU” into chat as your entire flood of units fails to conquer a particularly well-defended asteroid is also a plus.

The added game modes (presumably created to justify the higher $9.99 price tag) are kind of cute, but nothing more than a diversion from the best, original mode. “Billiards” moves the planets around in constant swirling orbits, ever-so-slightly changing the player’s deployment strategies; “Stealth” makes everyone’s units more or less invisible to everyone else, and so on. The truly hardcore may find enough difference between these modes to jusitfy their existence, but to the untrained eye they come off as more gimmicky than anything else. Within fifteen minutes of play, you’ll have experienced all the extra modes. If you don’t really fall in love with any of them, I wouldn’t entirely blame you for complaining about Fusion‘s price

All in all, Galcon is a tremendously easy game to recommend to anyone with access to an iPhone or iPod touch; Galcon Fusion is slightly harder to vouch for. If you can handle the game’s intensity enough to stick with it for prolonged play sessions — or if, conversely, you’re perfectly fine with sporadically playing it for a few minutes at a time before switching it off — then maybe Galcon Fusion is for you. If not, maybe you’re better off picking it up for the iPhone.