At a private appointment in Culver City, Logitech representatives showed me an iceberg on a presentation slide. The tiny summit above the water symbolized the dedicated gamers who already know about the best of the best in tech, and the hidden mass underneath the waves portrayed the people who play games but don’t dedicate themselves entirely to the hobby. Logitech’s new Prodigy line is targeting the bottom of the iceberg, providing mid-tier hardware for the people who perhaps want to upgrade but don’t need to spend more than $100 on each piece of gear.

The G213 RGB Gaming Keyboard is the first board in that line, and it comes with some compromises that put it in a bit of an odd spot. 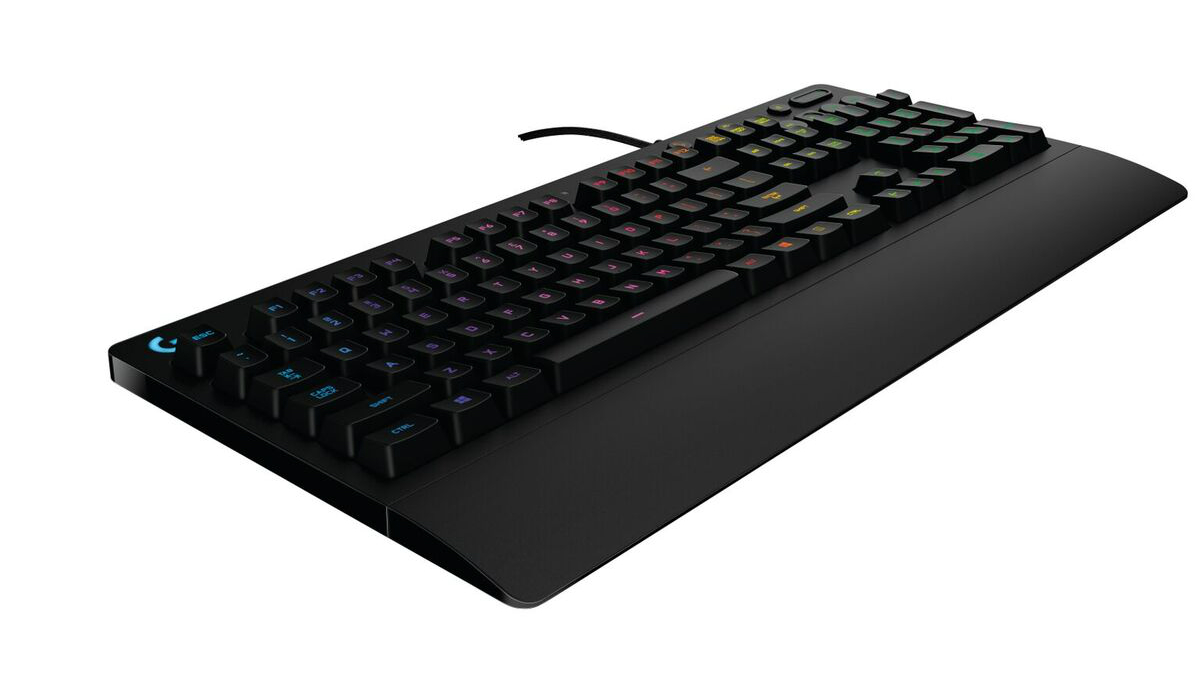 Of course, if you’re a regular on the site you’re most likely the tip of the iceberg, making this a difficult review to write. To those of you who Googled the Prodigy line and ended up here, welcome to Destructoid!

We’ll start with the biggest make-or-break issue: this isn’t a mechanical keyboard. If you’re looking to move on up from that plain ol’ keyboard that came with your pre-built PC and you’ve heard tales of that satisfying “click” that comes with a mechanical, you won’t find it here. This is a membrane-type, meaning it doesn’t have individual switches underneath each key. While this is purely preference, membrane keyboards are generally seen as less satisfying to use because of that lack of sound and tactile response.

That being said, the G213 feels pretty good for a membrane keyboard. It also comes with a palm rest, which I appreciate since I find myself both writing and gaming, which does a number on the wrists. The keys strike a good balance between volume and the effort required to depress them, though again, it’s nowhere near the same feeling as using a mechanical keyboard. 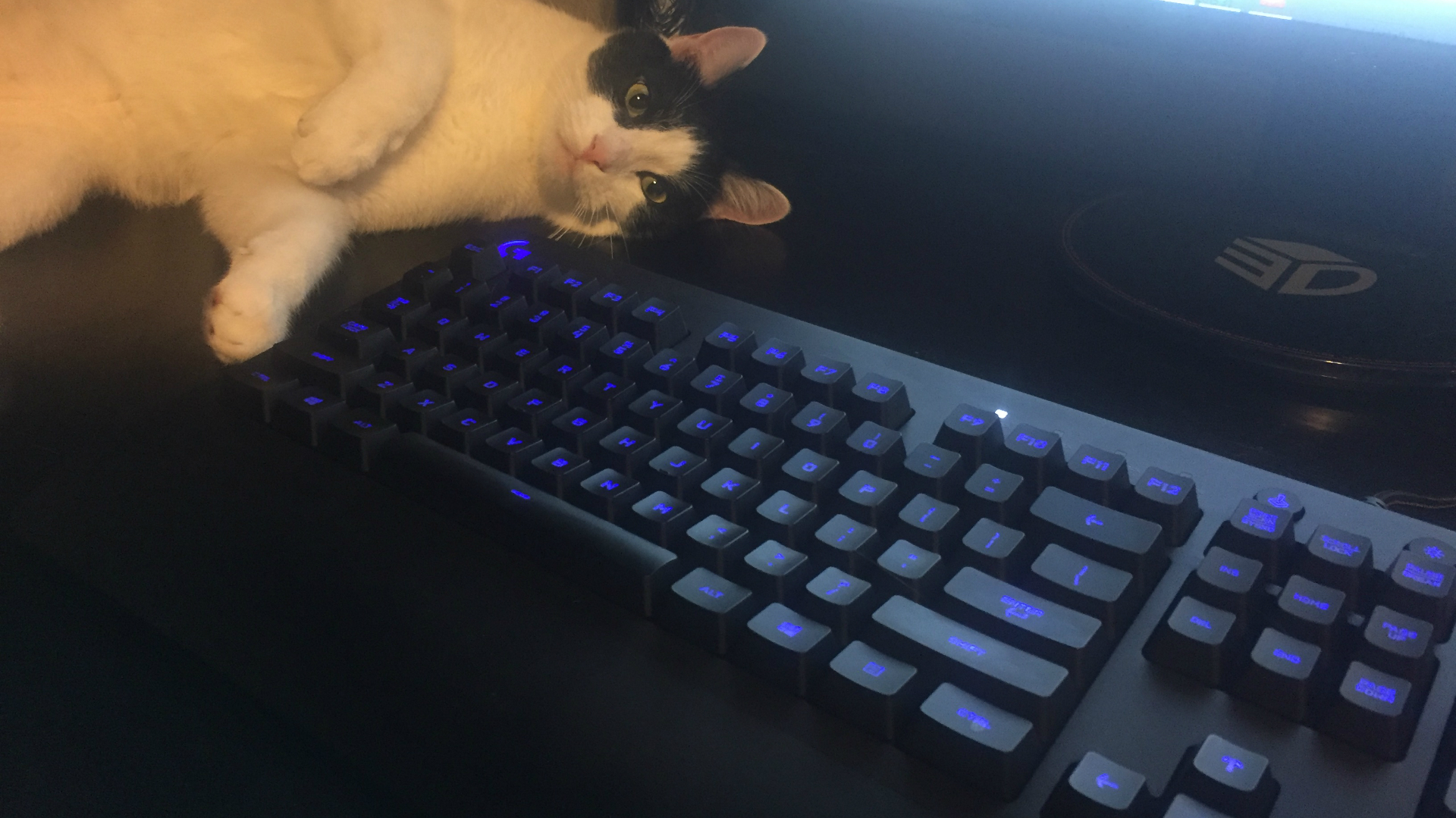 (My cat, Bro, looking unamused next to the G213, which he’s already covered in cat hair)

However, there are a few bells and whistles here that might make this feel like an upgrade compared to what you’re currently using. Dedicated media controls (always a nice feature to have, as keyboard shortcuts always feel like a cheat) such as play/pause, stop, reverse, forward, and a volume switch make listening to music much more convenient. A Game Mode button also disables the Windows key so that you don’t accidentally exit your battle — or sexy visual novel, I’m not judging you —  at a crucial moment. Another plus is that the keyboard is spill-resistant, so a small bit of drink or rain won’t ruin your day.

And of course there are those pretty, pretty RGB lights. If you’ve ever wanted to type on a rainbow and were mad at your basic, non-glowy keyboard, the G213 will mostly satisfy that craving. The colors do blend a bit, where the blues/purples and yellows/greens look a little too similar, and they’re sort of dim compared to higher-end keyboards. It’s still fun to watch people walk into your room or office and go “Wow, that seems excessive.” There are some folks who think of the lights as distractions, and they’ll be happy to know that they can turn off the lights just like their sense of fun has been shut off at some point in their cloudy lives.

As always, Logitech’s Gaming Software is wonderful and allows further customization, such as making your F keys into macros, or changing your RGB lighting and syncing it up with your other gear. You can also further disable keys for Game Mode if you want to focus your efforts to a higher degree. If you’d like, you can even create custom profiles for each game that you play.

This all sounds pretty great so far, right? Why would Zack say it’s a compromise, then? Well it’s hard to justify going for the G213 when the G610 that I reviewed earlier this year can now be found for $89.99. Only twenty dollars more for an actual mechanical keyboard with more heft and a volume rocker (much more enjoyable to use, in my opinion) is hard to pass up. I understand what Logitech is trying to do here, with having consumers see the Prodigy name brand to simplify the buying process, but when their own keyboards are so much better — and not too much more expensive — it’s hard to justify going for a lower tier product.

I don’t dislike the G213 at all. It’s actually a fairly good product in and of itself, but if you want to take the step towards having better gaming gear, you might as well spend the extra twenty and get the amazing G610. Nothing beats that mechanical feel.