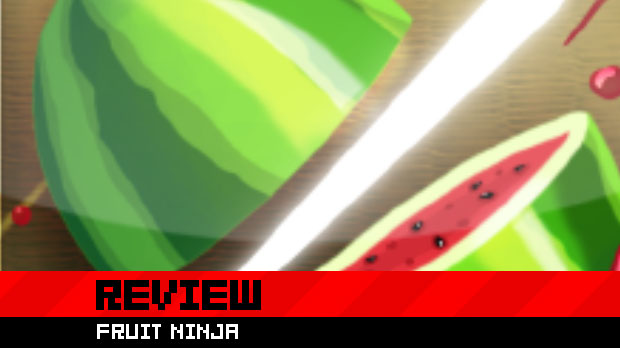 While a game in which you beat the crap out of fruits could be taken as a thinly veiled piece of homophobic propaganda, I am going to give Halfbrick the benefit of the doubt. After all, who truly likes fruit? Sitting there, so full of citrus, acting like it owns the place. Fruit has had an easy ride for far too long, and it’s high time we did something about it.

Fruit Ninja lets you live out your wildest fantasy. We’ve all dreamed about cutting fruit into pieces as part of a points-based dexterity challenge, and now the iPhone can become a conduit for this once unattainable ambition. It’s Fruit Ninja folks, and we’re reviewing it!

Like all the best iPhone games, Fruit Ninja is incredibly simple, yet entirely moreish. Fruit flies from the bottom of the screen and you use your finger or thumb as a fleshy katana, swiping across the iPhone to cut the petulant produce in half and paint the wall behind with satisfying splats of freshly spilled fruit fluids.

Players earn points for every fruit they cut down, and can also win ten bonus points if they are lucky enough to score a random critical hit. To keep things spicy, bombs are sometimes tossed in among the fruit, which are to be avoided upon pain of instant death. The game is also over if three fruits escape the screen unscathed.

Fruit Ninja is very easy to pick up and play, but as players succeed and the game picks up the pace, things can get quite challenging. Fruit starts getting thrown in clusters, and bombs become more frequent. You’ll need to have more than one finger on the screen as the action heats up and it will take a lot of practice to keep a game going beyond triple digit scores.

The game’s controls are responsive and, of course, simply swiping a finger makes it wonderfully suited to the iPhone’s interface. It can, however, feel a little imprecise when trying to nab the smaller fruit. Sometimes you’ll feel kiwis and strawberries slip from your grasp as you try and clumsily slice at them. Despite a few awkward moments, however, it works pretty well.

The game looks quite nice, with simply but bright graphics, although the sound is somewhat lacking. It would be nice if you could access iTunes via the game, and that feature would be highly recommended for a future update. Still, you do get little fruit facts in between rounds, in case you wanted to know everything there is to know about oranges. We know you do.

Halfbrick’s first iPhone-exclusive game is that perfect “bus stop” title, the type of game that’s designed for people with a few minutes to spare and an unwillingness to engage their brain too deeply. While great for providing brainless and quick fun, some gamers may be turned off by the lack of depth or alternative modes of play. There are no bonus challenges, and outside of some OpenFeint-powered Achievements, the only replayability comes from trying to top your high score.

If you don’t mind shallow portable gaming, however, Fruit Ninja is a recommended purchase. It’s cheap, it’s undemanding, and it’s perfectly suited to the platform it’s on. Despite the lack of options, the main game alone has enough of a hook to keep you going for a while. It’s the type of game you’ll maybe only play a minute or two a day, but will it will be a minute or two every day.