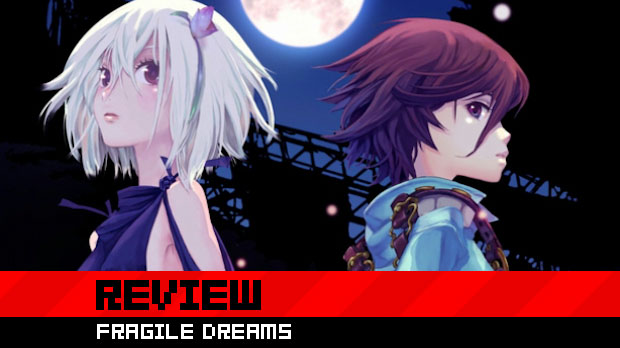 How do you review a game that has simultaneously brought you endless frustration and endless wonder? A game that has made you want to throw the controller and keep your eyes glued to the screen with a dropped jaw all at once? Fragile Dreams: Farewell Ruins of the Moon is a conundrum. A deep, dark, desolate and thoroughly beautiful experience married to an aggravating, repetitive and lacking game.

Fragile Dreams is brilliant. It is also quite bad. Yet it is also very good.

How do you review a game like this? Very much like this game’s intrepid hero, Seto, you just keep walking aimlessly in the dark and hope you find something. Then you get kicked in the back by a giggling pair of ghost legs that appeared out of nowhere.

Did I mention this game is weird as Hell, too? Read on as we try to review Fragile Dreams: Farewell Ruins of the Moon. 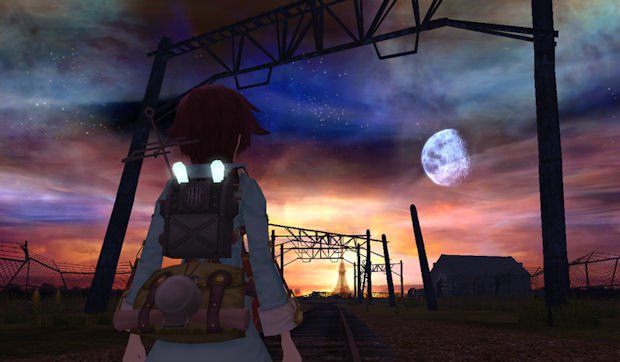 Fragile Dreams is difficult to categorize, as it straddles genres and always manages to elude an accurate pigeonhole. It is part action/adventure, part JRPG, part survival horror and part art game all rolled into one. It tells the tale of a young boy named Seto who finds himself alone in a world where most of humanity has died and everything it built has been left in ruin. The one man he ever knew has passed away, and so he sets out on a journey to find more survivors and share his life with someone other than himself.

Fragile Dreams is all about the journey, and it’s one of the saddest journeys ever seen in a videogame. Its tale is a tragic one, and as the game’s story is drip fed to the player, as Seto encounters a range of eccentric characters and suffers the loss of their brief company, only a player with a heart of stone could experience it and not feel something. The most amazing thing is how some of the game’s saddest moments shouldn’t be as depressing as they are. One very early scene, at the end of the first section, is unbelievably poignant, despite the fact we barely know the characters involved. 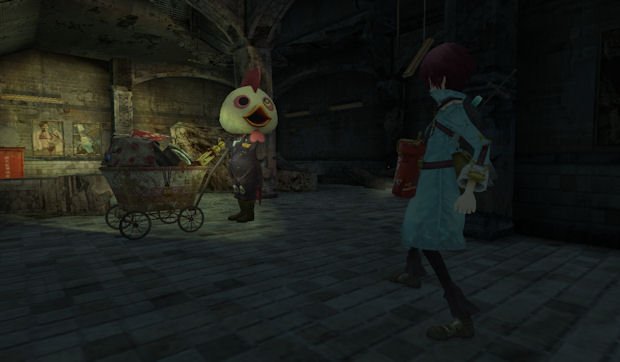 It’s an odd game, that is for certain, but not in a Killer 7 or Muscle March way. It’s not wacky, or weird for the sake of weird. There’s something deeper, darker and genuinely surprising about this humble little title. There are shocking moments in Fragile Dreams, but the game never forces those shocks with extreme plot twists or over-the-top action sequences. Instead, it possesses an astounding sense of subtlety, and is full of moments that you just don’t see in other titles, helped along by the fact that everything about it is so intensely human.

The game speaks out to some of our greatest fears, namely that of isolation and loneliness. Seto is a boy who just wants to be with someone. Stuck wandering alone in a world full of ghosts and memories, his desperation for a friend and his obsessive search for a girl he only briefly met set the stage for one of gaming’s most engaging narratives.

Unfortunately, so much time, effort and love was poured into the story that it seems none was left to spare for the gameplay. 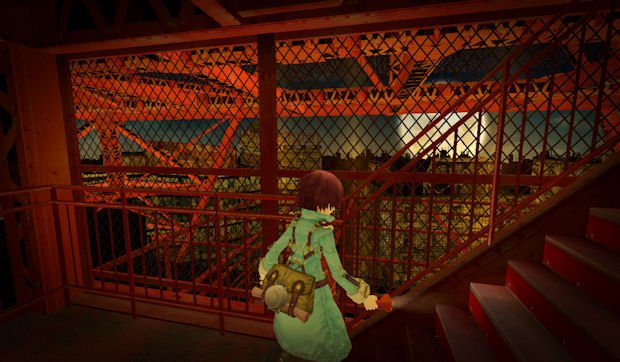 Fragile Dreams is played mostly as a traditional action/adventure title with elements of horror and roleplaying thrown in. The majority of the game is spent wandering around various desolate locations, taking control of Seto as he searches for the first human girl he’s ever met. The nunchuck is used to move Seto around while the Wii remote controls his torch, very much like the control scheme for Silent Hill: Shattered Memories. As he lights up the dismal areas with some impressive lighting effects, Seto will uncover items, creep across broken floors, read the memories of precious objects left behind, barter with a man in a giant chicken helmet, and fight an army of twisted and spooky ghosts.

The combat, by far Fragile Dreams’ weakest element, is all handled with one button. As Seto encounters various ghosts and monstrosities on his travels, he’ll employ all manner of improvised weapons to take them out. Attacking is handled entirely by the A button, with limited potential for combos and charge attacks based on the timing of the presses. Unfortunately, Seto fights exactly like the fifteen-year-old boy he is. Worse, in fact. His attacks are delayed, he has poor recovery after each hit, he can’t target enemies properly, and he has zero defensive capabilities whatsoever. He can’t block or dodge, despite the fact that the Z button is left idle throughout the entire game. Would it have killed the developers to throw in a dodge move for the Z button? Apparently so.

The game isn’t difficult. Health items are liberally thrown at the player and there are save points that fully replenish Seto’s life. It’s almost impossible to die for the vast majority of the game. However, fighting the various ghosts that usually hover out of attack range or sneak up from behind, is an absolute pain. 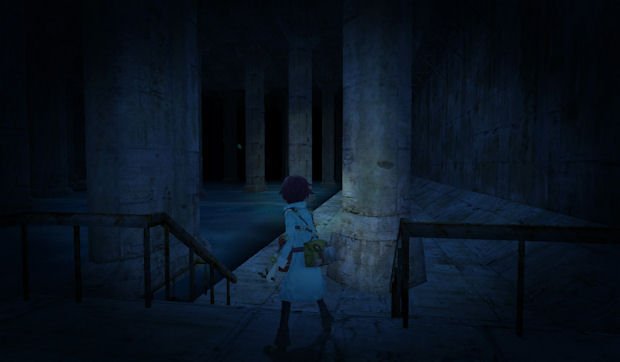 Fights take longer than they should because even the most common of enemies find ways to stay out of harm’s way and drag out the already dull combat. A number of opponents frequently phase in and out of reality and take cheap shots from behind, while Seto simply lies back and takes it because he has no way to avoid most attacks. Many enemies stagger upon being hit with a strong attack, but their staggers send them high into the air or low to the ground, where Seto can’t hit them, and they take far too long to get back into range. It’s like everything in the game is stalling for time, and it grinds on one’s nerves.

As if that wasn’t bad enough, Seto’s weapon can break, or rather, it will break. A lot. In fact, the further into the game you get, the more fragile Seto’s weapons become. Broken weapons can only be thrown away, and players will need to buy new ones from a merchant who only randomly appears at save points when he feels like it. Carrying multiple weapons might sound like a good idea, but Seto has a ridiculously limited amount of item slots and his slots fill up quicker than Paris Hilton’s on a Friday night. It gets absolutely ridiculous in the last chapter of the game, when Seto can’t keep hold of a weapon for more than a handful of fights. I have no idea what tri-Crescendo were thinking with this idea.

That’s not the worst of it, however. Nearly every single task Seto has to perform to advance the game’s story is nothing but pointless, boring, totally unwarranted filler, to the point where it becomes an insult to the player’s intelligence.

Inexcusably gratuitous backtracking, offensively dull fetch quests, and mind-numbing mini games make up half the gameplay, with the other half being … nothing. Absolutely nothing. There are moments in this game, far too many moments in fact, where the player’s time is thoroughly and infuriatingly wasted. Whether Seto is climbing down a ladder that takes almost ten full minutes to scale, or walking through long, repetitive corridors with nothing at the end of them, there are moments of sheer boredom that clearly exist only to bump the game’s running time up, and feel like nothing but a slap in the face from the developers. 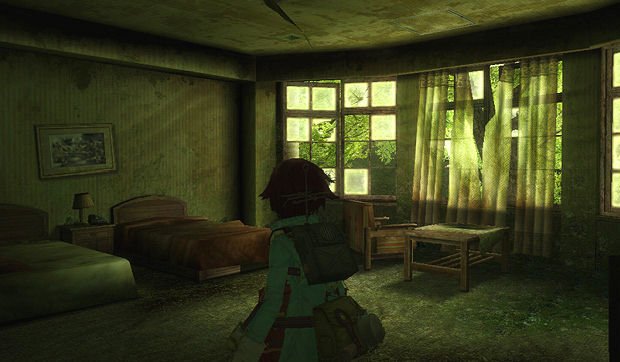 It’s only in the last hour that the game starts really throwing any new ideas on the table. Interesting bosses and fresh gameplay elements are crammed into the closing chapter, and it makes one wonder exactly why the ten-minute ladders and empty corridors were even necessary. It’s simply flabbergasting that such an imaginative and clever game is also such a dull, uninspired and exasperating one.

And yet … I love this game. I love this insulting, infuriating waste of time. I will never, ever play Fragile Dreams again. However, I am intensely glad that I have played it once. For everything this game does wrong, and it does nearly everything wrong, it manages to make up for it with a sublime story, amazing characters and some of the most memorable scenes I have ever had the pleasure to witness. At times I truly did want to throw my controller and turn the Wii off. Yet I couldn’t. I couldn’t tear myself away because I was so hooked by this game’s stellar narrative and the beautifully bleak and melancholic atmosphere of the whole experience.

I want to give this game a high score. It deserves a high score simply for what it does as a piece of artistic entertainment. However, it also deserves to be criticized for the fact that it fails in so many blatant and unacceptable ways. A game can get only so far on a compelling story, no matter how emotionally engaging and unique it may be. Unfortunately, Fragile Dreams crosses far too many lines. So many that, eventually, the story cannot sustain the overall experience. 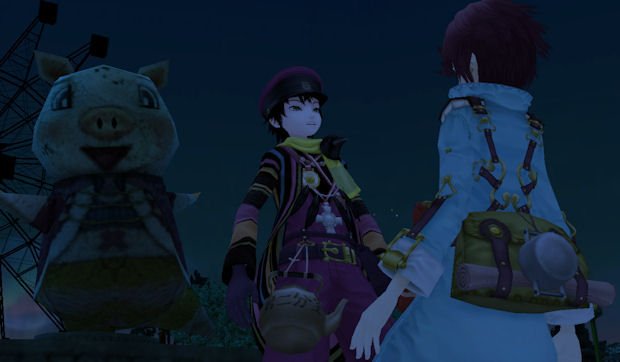 Is Fragile Dreams worth playing? Absolutely, if you have the sheer willpower and patience to see it through. There is truly nothing quite like this game, on the Wii or anywhere else. However, the game makes so many unfair demands of the player and requires so much forgiveness that most won’t want to stick with it. It’s a horrible shame because the things that Fragile Dreams does right are done beautifully, and such a lovingly crafted world deserves so much better than to be forced into a poor game.

That’s the biggest frustration with Fragile Dreams. That so much brilliance is let down by careless and slapdash game design. That a truly wonderful story is clouded by terrible combat, terrible quests and terrible wastes of time. That a title deserving nines, tens and nominations for game of the year has been relegated to the status of “alright” and “just about worth playing if you’ve got the stomach for it” thanks to things that not even the developers could have considered acceptable.