“Mothership Zeta,” the fifth and final piece of downloadable content for Fallout 3, looked really promising. Being abducted by aliens sounded fantastic, and the thought of exploring another new, interesting locale was an intriguing one.

Bethesda had an iffy start with the first add-on, “Operation: Anchorage,” but things only went up from there. Each of the DLC packs were better than the last, but what about “Mothership Zeta”? Does it continue this trend and end Fallout 3 on a high note? Or does it take a sharp turn for the worse?

Keep reading past the break to see what this Fallout 3 fanatic has to say about it. 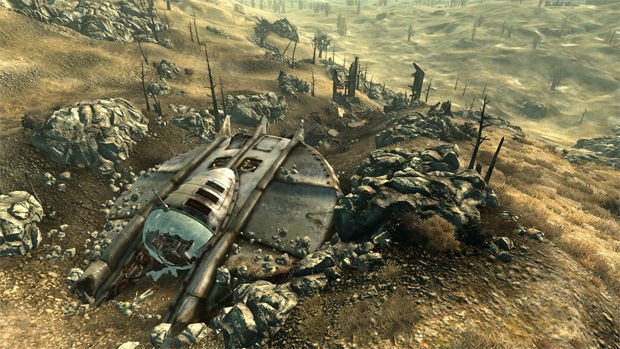 “Mothership Zeta” starts exactly like how you would expect it to. A new radio broadcast is selectable from your Pip-Boy, and a marker pops up on the map. One of the more interesting hidden gems of Fallout 3 was the alien crash site, and what do you know, it’s the exact spot where “Mothership Zeta” begins.

Upon traveling to the familiar location, a strange light begins to surround you. You haven’t even been there for five seconds and already you’re being abducted by aliens. What gives? For better or for worse (I’m leaning towards worse), you will remain on the mothership for the entirety of the add-on.

After viewing a disorienting sequence in which you are presumably being probed by aliens, you wake up in a cell next to another prisoner. She seems alarmed at first but quickly gets to the point: she wants off the spaceship and has a decent enough plan to make it happen. Since she believe the aliens want you two alive for further testing, she has you stage a fistfight in order to get the aliens to come in for a closer look and, well, you probably can guess what happens next. 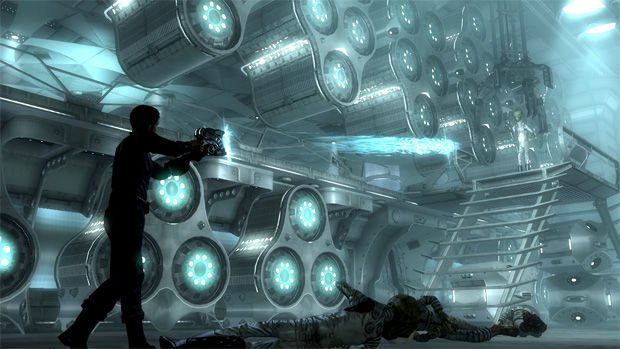 You both escape, and before long, come across a young girl locked in a cell not unlike the one you just broke out of. It goes without saying that the game makes you rescue the girl, but then things start to get a little weird. Apparently, the mothership zeta isn’t technologically advanced enough to prevent kids from climbing through vents and unlocking any door they want without alerting its alien crew. Who knew?

Eventually, you will stumble across a group of people frozen in cryo tubes. There’s an astronaut, a cowboy, a doctor from the Anchorage conflict, and a samurai. The astronaut doesn’t quite make it out of the unfreezing process alive, but the other three people are there for moral support and happily wait around while you go off and do all of the real work.

By this point, I began to see a somewhat alarming trend. “Mothership Zeta” consists of you walking through corridors, fighting a few aliens, walking through more corridors, coming into a room, pressing buttons, more fighting, and finally tampering with cooling systems to open doors. This would be absolutely fine if Fallout 3 had a decent first-person shooter mechanic, but that simply isn’t the case. 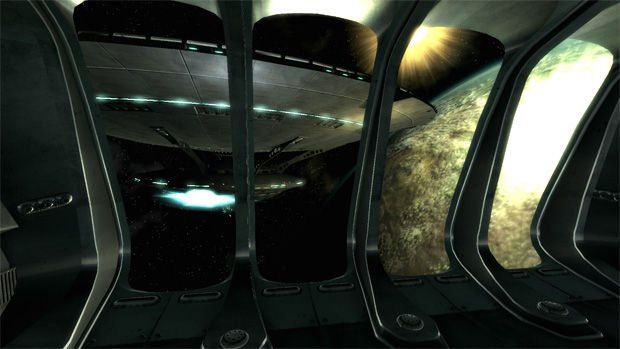 There’s a serious emphasis on combat, almost on par with the “Operation: Anchorage” DLC. But at least in Anchorage, the combat was mixed up since you were in a computer simulation, which changed some of the rules of fighting. Here, it’s you fighting a few different aliens, all of which look like they come from out of 1950s science fiction, and every once in while a hovering drone comes at you. Similarly, the new energy weapons are sadly (for the most part) typical alien ray guns and the like. They pack a punch, sure, but the previous Fallout 3 add-ons had much more interesting and even more unusual weapons, in my opinion.

As the last of the downloadable content for Fallout 3, I was really looking forward to “Mothership Zeta,” and it kills me to say that it’s not up to par. Apart from the very end where you get to walk on the exterior of the ship in a spacesuit and one other cool section I won’t spoil, the gameplay is more or less you walking for long distances, fighting a ton of aliens, and then blowing up some section of the mothership. In other words, it quickly becomes repetitive, and doesn’t play to Fallout 3’s strength of allowing players to tackle quests in multiple ways. 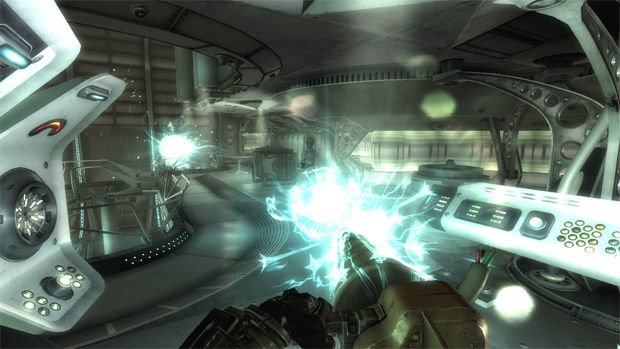 “Mothership Zeta” has its moments, and the new art used for the DLC is admittedly pretty neat, but pushing your way through the extremely linear, combat-oriented sections which make up the vast majority of the add-on is not advisable. For those wondering, you can go back to the ship after completing the final quest, but there’s little reason why you would ever want to do so.

The DLC only took me three hours to complete, and by the end of it, I was more relieved than anything else; the add-on felt much longer than a few hours, and I don’t mean that as a compliment. I would only recommend “Mothership Zeta” to those wanting 100% completion in Fallout 3 and the few people that are able to enjoy the game’s shooting mechanic. Everyone else, buy at your own risk.

Do yourself a favor and purchase any of the other four Fallout downloadable content packs before even contemplating getting this one.