There’s a steadily growing market for smaller and smaller desktops. These are machines that keep all of the advantages of a full computer (e.g., more power, ventilation, interchangeable parts) and the portability of a laptop.

The Alienware X51 was one of the first entries into this new space. Small, powerful, and portable: it was everything I look for in my systems. Now, the high-end custom manufacturers are striking back with their models with much more aggressive configurations, and the Tiki is Falcon Northwest’s Cruiser-weight contender. 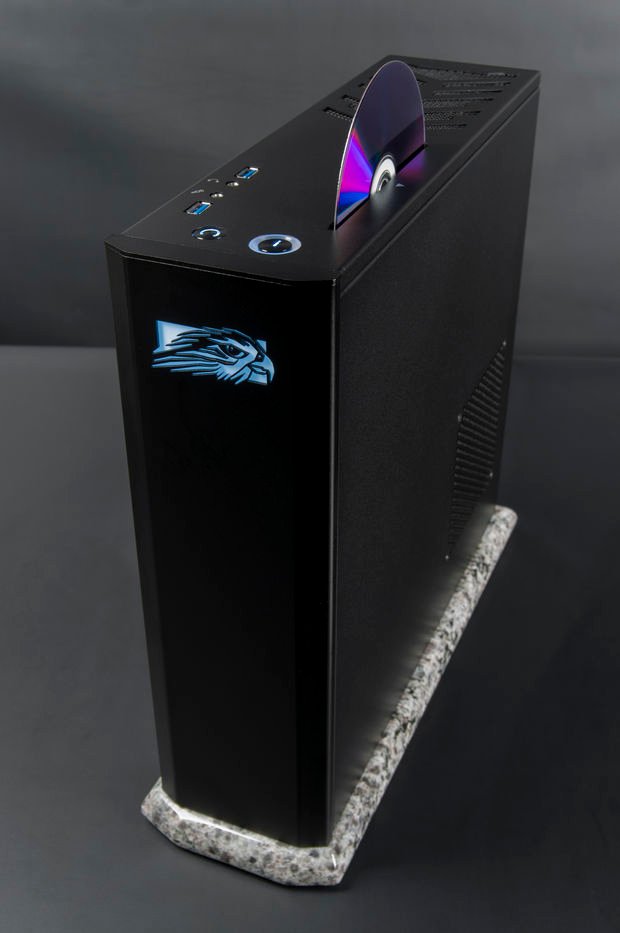 Being a LAN junkie, I approached this review from the perspective of a person who would want something light and fast that had more longevity than a laptop. From that perspective, the Tiki is a fantastic product held back by one really awkward design choice.

The first of these will be immediately apparent as soon as the machine arrives. It’s like an adorable Pomeranian puppy named Meatloaf that weighs 80lbs.

The Tiki has a large stone block on the bottom — ostensibly to keep the very narrow tower standing up straight. While I can understand their approach, it seems like the whole package would just have been better if it was designed to operate sideways. On the plus side, a slim form factor means that it can fit almost anywhere. It’s even small enough to fit in a standard bike cargo basket. Just in case you need to play games next time you’re in a triathlon. 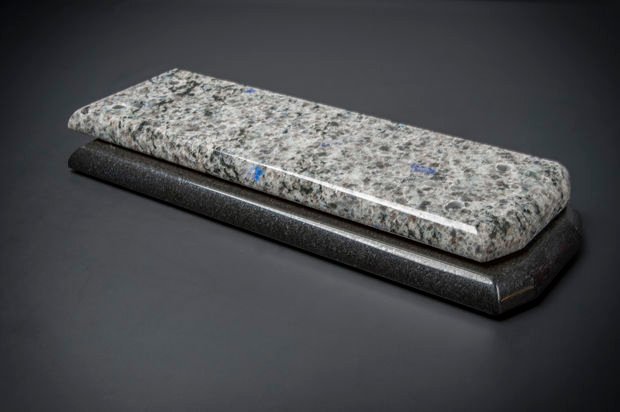 It wasn’t until my last day with the unit that I realized that the granite plates were removable. So if the weight is a bit much, you can cut the brick and have one may be one of the lightest towers I’ve ever seen.

A combination of liquid and air cooling, the Tiki is whisper quiet and runs cool as ice. Under full standard load, I never saw the temp climb past ~50 degrees. After a Futuremark burn-in, the GPU was sitting steady at 65 degrees.

Like most top-end things these days, the Tiki could run Battlefield 3, Portal 2, Skyrim, The Witcher 2, and StarCraft II at 1080p with full AA, 16x anisotropic filtering, VSYNC, etc. all at 60 frames per second. Loading times were obscenely short, as one might expect given the SSD. Everything ran like butter.

The chassis is made with steel and aluminum, which is nice to see given the preponderance of cheaply-made PCs running around. Construction and general design are excellent, and I don’t think I’ve ever seen something so small that has so many USB ports. There’s a half-dozen 3.0s, a few more 2.0s, and one specialized port for a factory reset with a special flash drive provided by Falcon.

Exceptionally well-equipped for creating ad-hoc networks and helping out with LAN-party backbones, the Tiki comes with a dual Wireless-N card and two magnetic antennas that you can slap on the side of the case or on something nearby like a fridge or whatever. 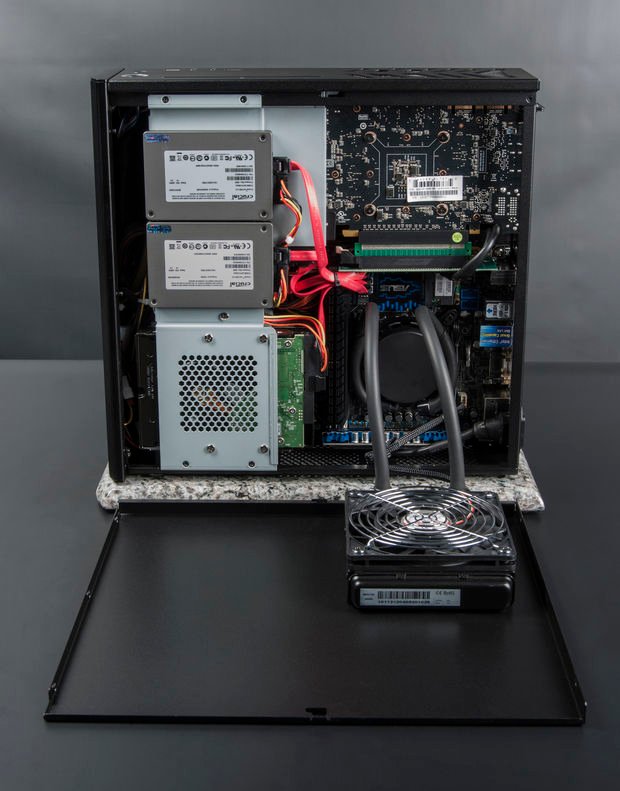 As I mentioned earlier, unlike a laptop, it’s possible to replace some of the components in the Tiki, though, to be fair, it probably wouldn’t be fun. When I was younger, and I built Micro-ATX systems for friends, I often ended up with cuts on my hands because of the utter lack of workspace. This thing is quite a bit smaller — akin to two notebooks stitched together. None of the hardware I saw in the case was proprietary, but it would be a pain in the ass to mess with anything other than the HDD and SSDs.

If I could level any complaint that was inherent to the design other than the granite base, it would be the lack of PCI ports. Other than the slot for the video card, there aren’t any expansion slots. That means no new audio card, NIC, or other peripherals. It’s fortunate then, that the Asus P8Z77-I is perfectly competent. Compared to most integrated options in other systems, it’s significantly above average.

What’s on display here is excellent, but whether or not this is really worth it depends upon a lot of things. There’s no doubt that at $3,000, this isn’t exactly the cheapest high-powered solution, but it’s certainly unique. That said, it’s wise to remember that the base configuration doesn’t have a monitor, keyboard, or mouse. If it did, and held the same price point, I’d be blown away. Unfortunately, at $1,800 base, if you don’t already have the other components, it might not be your best option.

If you can’t build your own system, or you need something exceptionally tiny and the Alienware X51 isn’t cutting it, then the Tiki is definitely a viable option. All around, you won’t find anything else this small, this powerful, this quiet, at this price point.