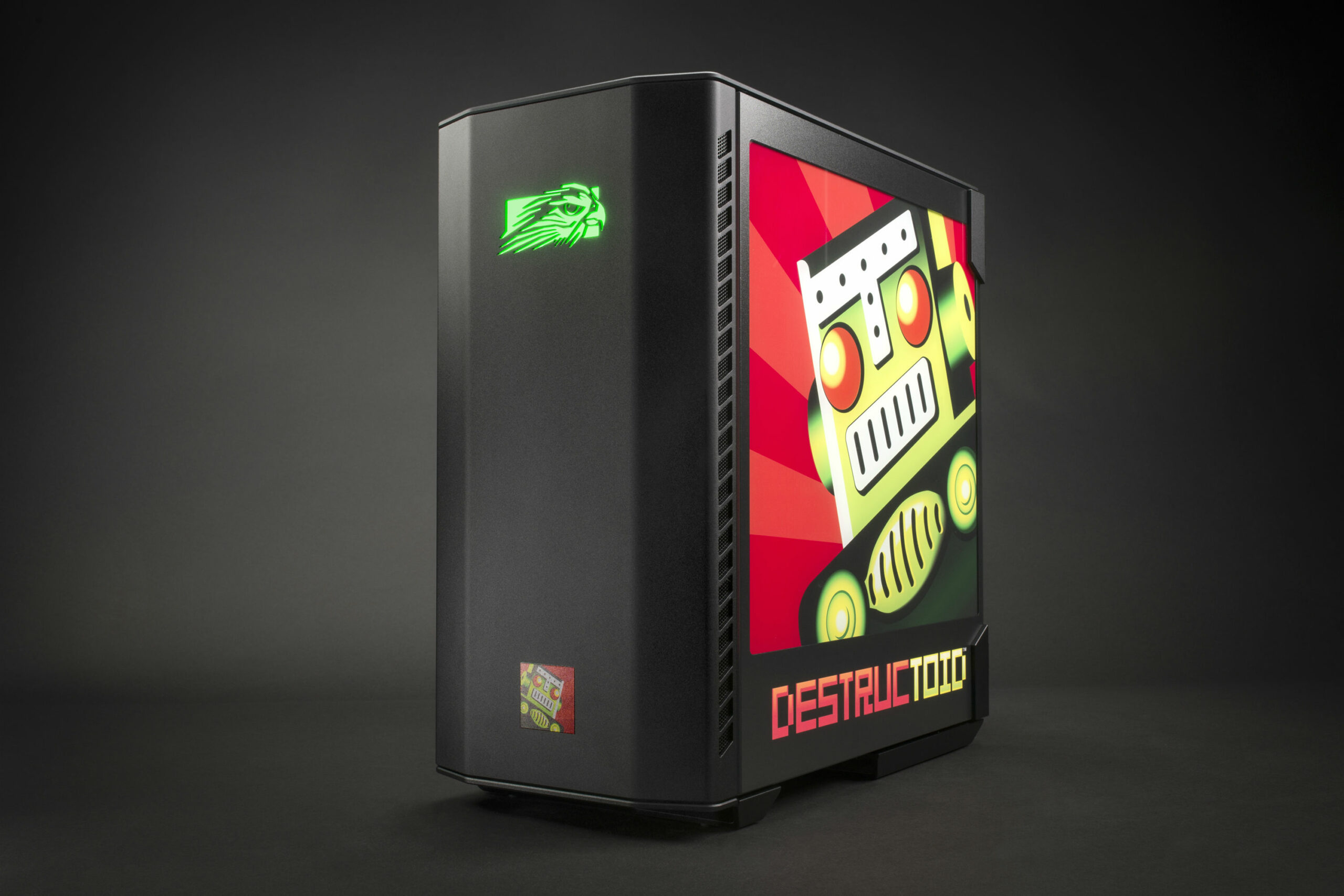 All custom PCs come with a price

PCs are a dangerous business. “Oh I need a new rig, let’s do some shopping…oh God no I’m about to spend $6000” is a common occurrence when window shopping for PCs. In fact, that fine line of finding something cutting edge/future proof yet affordable is one of the most stressful experiences I’ve had in the gaming realm even as an IT professional, so I can certainly see why people are attached to the idea of consoles.

Falcon Northwest takes the idea of custom PC shopping even further, so long as you’re willing to pay for it.

I was stunned to find out that Falcon Northwest wanted to custom-create a PC for Destructoid, strictly for us to review.

As you can see in the photo above the theme is green internal lightning, combined with two different prints of the Destructoid logo: two on the sides and one on the front. I dig the minimalist front the most, but Falcon says we’re “the first recipient of the clear glass sided Talon.” I’m happy, as I’m always partial to view-cases and I’m constantly tinkering with new configurations in my mind. Also, it looks like the logo on the glass is here to stay: try as I might I couldn’t scratch it. That’s because it’s printed onto the glass itself using a high resolution vector as a source and UV-LED printing.

One of Falcon Northwest’s running jokes is that everyone just “RGBs all the things” to create gaudy gaming PCs, so they’ve sort of circumvented that issue. There are neon lights inside, but you can turn them off if you want. Or you can custom craft the window to be tinted glass or solid aluminum. Falcon Northwest’s thing is customization, which you’ve probably noticed by now when it comes to the giant Mr. Destructoid print on the Talon. The only hangup is the NVIDIA logo if you opt to go that route for graphics cards, which you can completely turn off. The rest you can toggle or swap to any color you want (I left them as green, because of course).

The unboxing process was completely painless, as Falcon sets up Windows 10 by default on their machines, and I didn’t find any bloatware to boot. I went from taking it out of the box to configuring my desktop in around 10 minutes: partially helped by the great form factor of the case. Speaking of, the case itself is extremely clean, without excessive dongles and ports in the front. The top, however, has a 3.5mm jack (headset/microphone combo) alongside of three USB ports (two USB 3.0 type A and one USB 3.1 Type C). I’ve really gotten used to a Frankenstein’s monster of front and top cables, but I found that acclimating to hooking everything to the back of the rig again to be fairly simple.

The case isn’t as huge as I thought it would be: clocking in at 17.25″ x 8.75″. That picture above with the internals is a real shot: there isn’t a lot of room for muck in there. As Falcon points out, modern gaming PCs have eschewed screws in favor of swing doors, and the 20th Anniversary Talon only has a (literal, see above) handful of plastic that compromises the makeup. The first real time the build quality sunk in is when I tapped the top of the case with my knuckle, and was met by a loud sturdy thud. Not only is the case scratch-proof, but the glass is as well. Both sides feature easy access doors, mind.

I spoke to Falcon about the case, and how they spent two years developing it, noting that most PC rig tech advancements in the last seven years have been density related. It’s a path that eventually led them to this quiet, non-space-hogging form factor that’s allowed me to save some more room around my desk area.

Low key, I think one of my favorite aspects of the 20th Anniversary Talon is the cabling job. It’s lean and clean, even with practically no wasted space. It’ll be easy to pop in upgrades down the line too.

After my experience with my previous PC (which was already loud to begin with), I was happy with how quiet the Talon is. Falcon specifically engineers their systems to aim for low heat values, which in turn allows for quieter systems and cooler components. It sounds obvious but not every manufacturer makes this a priority, as I’ve had quite a few gaming rigs run hot.

One of the chief architects of the design brought his knowledge from aviation school into the development of the anniversary Talon, noting that cooling was paramount when gaming rigs tend to run hot. It makes a lot of sense why the machine is so cool to the touch, but Falcon doesn’t liquid cool the graphics cards to avoid user hassle so they basically cool everything else. It sounds hyperbolic, but at any given time if I brush the Talon, it’s cold to the touch.

We used 3D Mark for the purposes of testing this rig, as well as in-game benchmarks for the freshly released Final Fantasy XIV: Shadowbringers and Gears 5 (you can read about the demanding Red Dead Redemption 2 here, which arrived several weeks after the Talon separately from Rockstar and luckily lined up). Two GeForce RTX 2080 Super in an SLI configuration is pretty much overkill for most of the market, but here’s the rundown.

As for 3DMark, using the Time Spy test, two cards (SLI) reached the 99th percentile while one card (SLI disabled) achieved 92%. with a core clock of 1,950 MHz and a maximum turbo core clock of 5,002 MHz. On the Fire Strike Ultra 1.1 test (4K), it performed better than 98% of all tested PCs with SLI (74% better with one card/SLI disabled). Pushed to its limit the GPU temperature hit 74 degrees Celsius, while the CPU hit 69 degrees maximum, averaging out at 40 degrees for the latter: far below the danger zones recommended by Nvidia and Intel respectively. Final Fantasy XIV obtained a score of “extremely high,” rated at 23959: the highest I’ve seen to date on any forum post. Gears 5, an impressive and relatively new release, hit an average 60FPS framerate at 4K on Ultra settings with SLI.

For the Samsung 970 EVO Plus SSD, our sequential read speed clocks in at 3519.4 MB/s, with a write speed of 3290.4 MB/s, which is on par with what Samsung expects from a single SSD. Using PerformanceTest 9.0, the CPU performed at the 99th percentile with a single-threaded score of 2973. The CPU is so new (it came out on October 30) that more data is needed, but right now it’s looking good.

Everything checks out for this powerful machine. It’s impressive now, and the case ensures that it’ll be impressive when the time comes for an upgrade.

The sky is the limit with Falcon Northwest’s custom processes: the Outer Worlds Talon custom job above (which was not provided) shows how far you can go. So far the Destructoid rig has been a conversation starter, which is exactly what Falcon Northwest wants.

Configurations (excluding any hardware, just talking aesthetics here) include unpainted/painted rigs, glass/solid siding and custom UV prints for the front/side panels. This is where most of the cost comes from, beyond the touches that Falcon adds with the aforementioned cooling system and glass siding aesthetic.

As always, PC cost is in the eye of the beholder. A case like this can last a really long time with maintenance, and so long as you’re willing to upgrade your graphics card every so often it should last you a long while: my last gaming PC, with minimal upgrades, got me through six years of top-of-the-line (and VR) play. While there are a lot of competitors out there in 2019, Falcon blew me away in terms of aesthetics (and how they back those aesthetics up with engineering advancements), and for some people, myself included, that counts for a lot.

[Only the PC was provided for this review.]