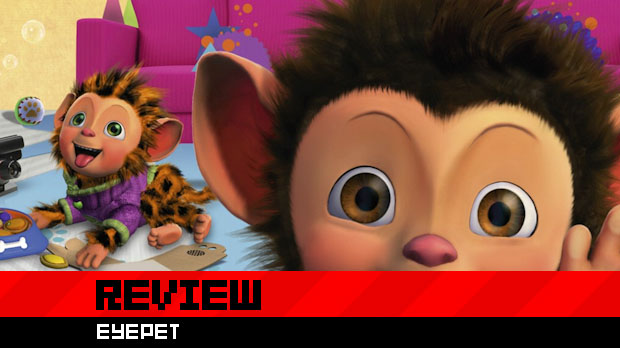 Before the Wii, Sony brought casual motion-controlled gaming to the masses with EyeToy. Unfortunately, Sony never really capitalized on it and is only now scrabbling to make use of its camera peripheral in the face of ever-growing fascination with “casual gamers” and the belief that motion control is the only way to appeal to them.

Enter EyePet, Sony’s newest family-friendly endeavor. Using the PlayStation Eye to transform your living room into a virtual playpen, EyePet puts you in charge of a cuddly, cute, and multi-talented fantasy mammal and interact with it using your own two hands. It’s got the uniqueness and adorableness to appeal, but does it have the necessary staying power?

We’ve spent plenty of time bowling, planting seeds, and driving wooden cars with our very own EyePet and are ready to give it the final word. Read on to find out if you want one of these things for Christmas.

It can’t be denied that EyePet is a very clever idea. Virtual pets are a penny a dozen and have been around since the old Tamagotchi days, but using the PlayStation Eye to turn your own floor into the pet’s living space is a terrific use of the peripheral and instantly makes EyePet appear more interactive.

When you first get the game, you’ll need to set up your room correctly, pointing the PlayStation Eye at the floor and placing the provided “Magic Card” so that it appears in the center of your television screen. You might find that this process takes forever, since the game is incredibly fussy about things being placed in just the right position. Don’t worry, this is going to happen a lot.

Once things are in the correct order, the game’s tutor, an embarrassing man in a lab coat who thinks he’s hilarious, will give you an egg that appears onscreen. Here, you get your first taste of interactivity, as you use your own hands to roll, heat and tap the egg until it hatches. While it seems strange to “touch” something on the television without actually touching it, and the suspension of disbelief required is astronomical, it’s certainly cute and fun and manages to just about work.

Once hatched, the EyePet is yours to play with. You can make him run, jump and pounce by waggling your fingers at various points on the screen, or you can pet him by pretending to stroke his fur until he falls asleep. The Magic Card is used to “hold” a variety of items, such a cookie jar that you can feed the pet with, or a trampoline. You’ll need to take care of the EyePet, keeping him well fed, exercised and regularly bathing him in what is perhaps the most fun of the many minigames. You’ll also get to unlock various items of clothing for the Pet, and you can also color and style his fur to create your own unique look.

The main “game” part of EyePet lies in the Pet Program. This is a collection of challenges that you can undertake to unlock additional items and games, and is where players will spend the majority of their time. The challenges range from simple tasks like taking photographs, to more complex ventures such as helping the EyePet bounce on the trampoline to achieve certain heights, or drive a model car through a set of gates.

The amount of things the EyePet can do is quite impressive, and the PS3’s full range of toys come into play. The EyePet can copy drawings that you yourself doodle onto a sheet of paper, and he can mimic the notes you sing into the PlayStation Eye’s microphone. All of the pet’s talents are helped along by the fact that he is undeniably charming and lovely, and even the most stone-hearted of cynics should find the little creature lovable.

Unfortunately, however, the game’s innovation and charm are offset by the fact that nothing in the game actually works properly. Sure, it all works up to a point, but everything falls just short of competence. The challenges are the worst part, some of them becoming exercises in pure frustration and exasperation as the EyePet refuses to do what you tell it to do. Sometimes the creature simply decides not to respond to the required input, and some of the input itself relies on such vague hand gestures that the game is frequently confused.

Simple actions like feeding the EyePet can be a horrible experience as the Magic Card hems and haws over where you try and place it, and the game’s awkward and frisky physics send items flying everywhere. More complex actions, like drawing, are ruined by the fact that the EyePet can’t perform any task correctly. Even when he’s learned to draw, he won’t draw what you want perfectly, and you need to keep things painfully simple to stop him from screwing it up. We’re talking “one square with a triangle on it makes a house” simple. Same goes for the singing, with the EyePet always managing to fall just short of expectations and providing an incorrect version of what you’re attempting to make him do.

To be fair, you can get the EyePet to draw a pretty convincing penis, but when that’s the most fun you’re getting out of a game, something’s not quite right.

At one point, I was tasked with making the EyePet jump a certain number of times. I was waggling my fingers in the air, making the gesture required to get the Pet to jump, but he ignored me and instead chose to pull out his pen, completely of his own volition, and draw faces on the floor. It would have been cute if I hadn’t been dealing with nonsense like this all day, and was about ready to slap the taste out of his mouth. Thankfully, you can actually hit the Pet a little bit, which helps ease the mounting tension that this game can pile on you.

It’s a shame that EyePet doesn’t work as well as it should, because it’s got an incredible amount of promise. It looks fantastic, with great art direction and absolutely gorgeous animation. The Pet is nearly always amiable and it’s a joy to simply kick back and watch him play. However, too much time spent with the game becomes tiresome and irritating, and it’s not helped by the fact that the experience is also quite shallow. There’s a wide variety of things to do, but those things are themselves rather vapid and grow boring after a minute’s play.

EyePet consists fantastic idea after fantastic idea, let down by failed implementation after failed implementation. It’s a confused and messy experience, though it’s not because the game itself is sloppy. It’s very well made, but it seems that the developers tried to make it do so much at once, that it manages to achieve nothing successfully. EyePet is like a quadriplegic genius. You know he’s brilliant, but he’s thoroughly useless to society.