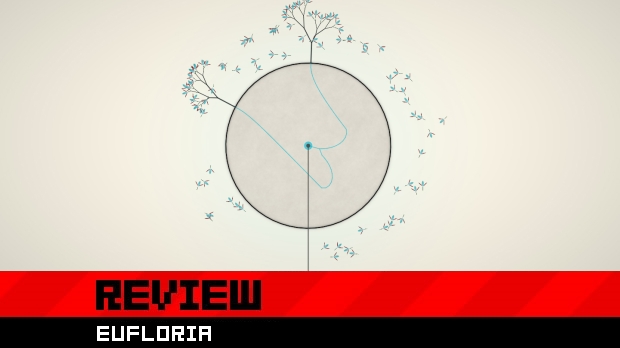 Eufloria — formerly known as Dyson — has been on my radar for a while now. Firstly, one of its creators also made Cottage of Doom. This, in itself, is sufficient reason for excitement.

Secondly, Eufloria seemed like it may well have been made for someone just like me — someone who is absolutely terrified of real-time strategy games, who would need a redonkulously streamlined and minimalist interface in order to feel at ease.

Thirdly, I knew I’d probably be able to swing a free review copy.

Whatever the reasons for my excitement, the facts remain: the game is now out (demo here), I have reviewed it, and you can read that review after the jump.

Eufloria may be one of the most aggravatingly almost-good games I’ve played since…well, since Brutal Legend, I guess, but if I hadn’t just finished Brutal Legend I’d be really hard-pressed to remember another game with so much squashed potential.

Though Eufloria‘s premise may turn some off from the get-go, it’s a wholly laudable one: remove all the zerg-rushing, resource-gathering, fast-paced cliches from the RTS genre in favor of (generally) relaxed strategizing in a (considerably more) relaxing environment. Minimalism is the name of the game: the HUD is relatively clutter-free, the game can be controlled entirely using the mouse and, as you can probably tell, the graphics are about as simple as simple gets. And, initially, it all gels in a tremendously satisfying, Zen sort of way.

Since there’s only one unit to keep track of in the game, and since that unit is used for everything from attacking enemies to building structures to taking over the field of asteroids that comprise the game’s playing field, Eufloria initially feels like an RTS that requires an entirely more focused mindset. As your units take a pretty long time to grow and must self-destruct in order to take over enemy bases, early rushing is effectively impossible. Because you’ve only got two different kinds of buildings to worry about, you can’t waste time worrying about tech trees and unit upgrades when you should be worrying about the real strategic questions: how do I spread my forces out in order to take over the most ground, while still amassing a decent enough army to protect myself from enemy attacks? How do I know which asteroids will make better troops? Which should I take over first, and where should I prioritize my troops?

Eufloria‘s problem is that all of these questions have a single, tremendously boring answer:

The enemy AI is so docile for about 80% of the campaign mode that, more often than not, you can beat every single level simply by building a few Dyson trees (the Eufloria version of barracks) and leaving the game running in the background while you go about your business for a half-hour or so. The enemies will never attack, and by the time you come back you’ll have an army big enough to take out the rest of the map with practically zero resistance. It’s the same problem I had with Gridrunner Revolution, only amplified: the game doesn’t actually start requiring real strategic thought and exploration of its mechanics until the final few, satisfyingly difficult levels. I didn’t, for instance, need build a single defensive tree until the third-to-last level of the campaign.

You may be thinking: isn’t it just as much my fault for deciding to rely on such a cowardly tactic as it is the designers’ for neglecting to fix such an exploit? This might be the case, were it not for the fact that Eufloria unintentionally goes to great pains to teach the player that waiting is a valuable and necessary skill. Even when playing missions against much more aggressive AI, I often found myself in situations where, with only a handful of soldiers left but a fair number of Dyson trees still functional, I simply had nothing to do but sit around and wait for more soldiers to pop out of the ground.

While I initially dug Eufloria‘s relaxed atmosphere, I simply can’t justify a design which forces the player to sit around and wait, in fifteen-minute increments, for the ability to actually do something. There were times, too numerous to mention, when I would have strangled an orphan for a fast-forward button.

Not to mention that, when I finally did amass an army of reasonable size, the act of combining them into a lethal fighting force was far more tedious than I would have expected from such an otherwise laid-back game. Since you can’t set rally points for your troops or even select more than one asteroid at a time, you’ll have to, asteroid by asteroid, individually instruct your units to converge on a single location. I almost immediately grew irritated (and decidedly not-relaxed) with mindlessly clicking and dragging from asteroid to asteroid to asteroid just to combine my forces. Every other aspect of the interface felt streamlined and polished to a mirror sheen (you can tell a unit’s exact stats not by looking at the wordy HUD, but by examinine the size of its body, wings, and nose): why not the troop management?

There are, however, occasional moments when these complaints become somewhat negligible. Moments that, rare as they are, show the player the remarkable strength of Eufloria‘s core design philosophies. You’ll watch in a mixture of awe and horror as an enemy force, represented by a goddamn flood of grey dots, converge on your most weakly-defended asteroid. You’ll take a moment to mourn the loss, but only before jumping on the opportunity to send an equally gigantic force of your own to covertly steal your enemy’s largest, most powerful planet. AI-controlled armies will fight one another across the length of an entire map, crisscrossing around your asteroids that sit trapped in the middle until you can expand and strengthen your own empire to become a force worthy of their aggression. You’ll zoom in on the actual infantry battles and find yourself on the verge of laughter because you’re basically watching flower petals blasting the shit out of each other, but unable to crack up because the battles are still really goddamn pretty, in a poetic sort of way.

For what it’s worth, the Skirmish levels (unlockable from the first moment you boot up the game because, in the creators’ words, “it’s your game”) are more immediately interesting than the frustratingly slow campaign missions. The skirmishes only differ from those story levels in that the AI is more aggressive, but that’s still enough to encourage the player to engage in thoughtful strategy, rather than treat the game as a glorified screen saver. You’ll still spend a lot of time waiting for no real reason and cursing the lack of a “rally point” option, but the experience is still more altogether satisfying than the vaguely-plotted campaign. The act of simply waiting becomes a completely untenable strategy once the enemy decides to attack three minutes  into a match. Thank God for that.

On a related note: I really hate to be the kind of asshole who complains about the lack of a multiplayer mode in a single player game, but I couldn’t help wishing for the opportunity to cross pistils with non-AI competitors. However muddled the implementation, the basic strategic choices players must make would translate perfectly into a multiplayer setting. Truth be told, I’d happily give up all the single player modes in exchange for a multiplayer component.

In the end, Eufloria is tough, but not impossible, to love. You may have to fight through (or altogether ignore) the campaign mode to get to the good stuff, and even then you may spend more time waiting and micromanaging than you’d like, but I can’t possibly deny the strength of Eufloria‘s most basic design choices. Hell — I typically despise RTS games, but I still found much of Eufloria enjoyable. Just not as much as I would have liked.