I like hard games, and I love dungeon crawlers. I enjoy getting lost in caves and struggling to just barely find my way out, only to re-equip, heal, and then make my way back in for more abuse. That’s my idea of a good time, and I find that I’m always looking for another gaming experience like that. Make it all portable and I’m in my own little heaven.

Etrian Odyssey III is exactly that, and then some. It’s a big game with plenty of dungeons, difficulty, and all the lovely equipment and character intricacies that I enjoy so much. By all accounts this should be my favorite game. Don’t get me wrong — I like it. It’s just that, at times, the uphill climb was a little too steep. And this is supposed to be the easiest of the three EO games? Am I getting soft in my old age?

There’s little to no story in Etrian Odyssey III, and that’s probably because there doesn’t need to be much of one. You’ll always be in a dungeon or on a boat, and that’s all that really matters. For those that hold the A button to blast through the text, you’ll start out as hired help, sent under the city to find whatever ancient goodies await there. For a long while, that’s all the motivation you’ll have, though it does pick up a bit later. As fans of the series will tell you, the satisfaction you’ll get out of this title will come more from your successes than it will from the uncovering of any story elements.

You’ll start off by creating your own characters to form a party. You’ll design them completely, from class to their final name. (I named mine after the cast of K-On! because I’m a loser.) The game has a ton of classes to pick from, and all seemed like they did something useful enough to be their own party. Of course, none of the classes have any kind of shine to them until you play the game a bit and level them up.

This is about as standard as it gets for dungeon crawling, folks. Like the games before it, you’ll march, space by space, in a first-person view, through dungeons of increasing difficulty. Battles will happen when you least expect it (or most fear it), and those are about as simple as can be, with attack animations playing out over mostly static enemy art. Dungeon crawler fans and EO veterans will feel right at home, and uninformed onlookers will wonder what the hell you’re doing. They’d be even more confused when they see the game’s map making aspect. 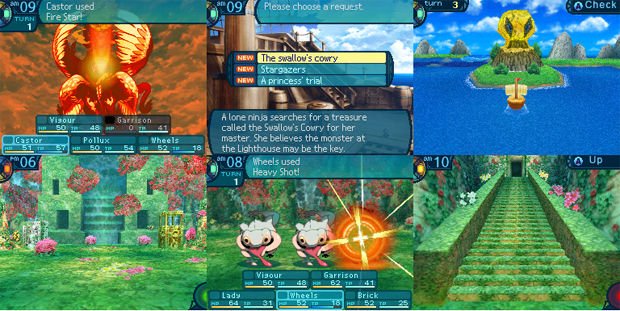 You’ll make maps. Oh, how you’ll make maps. You could probably apply for a job at Rand McNally after completing the Etrian Odyssey series of games, going in confident that you have plenty of map making experience under your belt. The top DS screen is used for navigation and battles, while the bottom touch screen is solely dedicated to drawing maps. You’ll use your stylus to pick map tools and manually draw out where you’ve been, marking treasure chests, doors and other secrets for future reference. The drawing tools work exactly as expected and do not hinder the gameplay. The benefits of making good maps are felt when you apply tools like the auto-walk arrows. You can place these arrows anywhere on the map, and by stepping on them, your party will automatically move to follow them until they end. This tool is great for pushing through any floor that was particularly difficult to navigate through the first time, and it’s even better for grinding.

For me it was strange how I began to feel like I wanted to make the best maps I could, sometimes to the point of feeling like the battles were interruptions to map making. I may have some kind of obsessive disorder though.

Truth be told, there’s not a lot that’s different here from the past EO games. There’s gameplay improvements and new locales to experience, so we’ll focus on those for the remainder of the review.

There are some additions to party creation and enhancement that make Etrian Odyssey III the strongest entry of the bunch. One of the most notable is the changes to character classes. I began to feel really empowered once I could assign a second character class to each character, a privilege you’ll acquire after playing the game for a short while. With this ability, you could take a mostly tame class, like the Farmer, and make him quite versatile. The flip side of this privilege is that I felt like my successes were wholly in my hands, and that assigning a wasteful second class or not enough experience points into that class could mean a more difficult struggle down the line. But, stepping back and looking at the overall game, the whole experience is kind of difficult, and I don’t think there’s a wrong choice to be made. You just need to keep your head down and make smart choices, using your party to the best of their abilities, whatever those may be. One thing’s for sure: having multiple classes in a character makes for some deep customization, and fellow RPG fans will find this depth really satisfying.

One of the other major changes is that you get to step out of the dark dungeons and labyrinths for a bit and get some fresh air. You’ll take to the high seas in a boat in EOIII to sail and look for challenges and treasure. While it may look like a totally different experience, you’re really just moving in the same step-by-step progression. It’s just that you’re not in a dungeon anymore. The amount of supplies you can carry with you determines how far you can venture out by boat, and you’re very limited your first time out. The more you explore, the more space that opens up, and you’ll be able to push out father, fight enemy ships and…go fishing. You’ll reel in fish to sell when you get back to port, which is how you’ll earn money for your time out at sea. Oh, and you’ll be mapping these seas as well.

For a first-person, DS dungeon crawler, Etrian Odyssey III is a visually pleasing game. The first dungeons are lush and nicely animated, which is good as you’ll be looking at them for the majority of your game time. There’s also some really nice work on all of the character classes and dialogue busts. Even the enemy art looks great.

About the difficulty: Imagine busting your ass, doing everything you can, spending all your money and time only to come out to be able to boost your party’s stats by a few points. Or even worse, coming into a dungeon fully equipped only to be sent packing after only one battle. It’s nice how the game is designed to make you hungry for any boost you can get your hands on, but I was only able to take this unsatisfying feeling of lots of work for little pay for so long. Sometimes this game is hurt-your-feelings hard. It helped a bit when I shifted my focus from becoming stronger to being a better cartographer for awhile. That was fine until a boss battle came up, forcing me to shift focus again to bulk up. 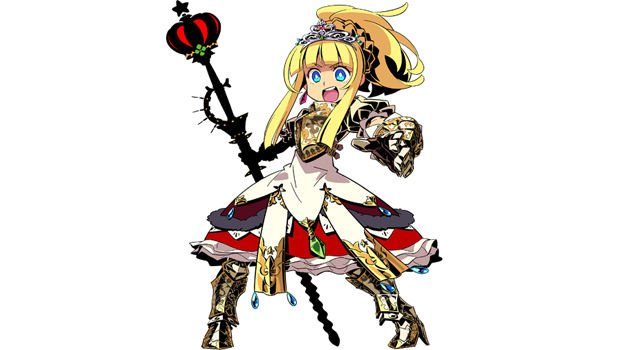 I found the difficulty to be mentally taxing at times, but equally rewarding after my successes, as it usually goes. This game has no qualms about busting your balls, even from the very beginning. Even the starting standard enemies will make sure that you do not forget to always check and level up your characters. Beyond that, FOEs will appear and make you scream at your DS, though they’ll give you nice experience points for the trouble. The boss battles are all situations that had me putting my DS down to really think about. Even then, I often found myself nodding my head during fights as if to say, yep, I’m screwed again. Of course, seasoned gamers know to expect this going in to a game like EOIII. I’m just warning you to be prepared. Know that it’s not as hard as The Dark Spire, though!

Just after the game’s announcement, Atlus kept hitting home that this entry in the series would be the most accessible. That may be the case, but even then, this game isn’t for everyone. It’s certainly an enjoyable game, and it’s one that dungeon crawler fans and Etrian Odyssey followers will instantly be drawn to, but everyone else needs to know that this is a game that puts a focus on planning, pre-battle equipment choices, and character strategies over action. I’d call it a thinker’s dungeon crawler. If you’re up to the challenge, there’s a lot of fun to be had with Etrian Odyssey III.