Ambitious. That’s a word I’d use to describe Ninja Theory. In terms of game narrative, this is one studio that goes all-out and is never afraid to stray from the accepted archetypes that have plagued so many other games over the years. Originality, depth of story, and incredibly rich characters are the name of the game, and Enslaved: Odyssey to the West has that in spades.

Heavenly Sword, Ninja Theory’s previous game, also had those things. However, it was sorely lacking in the gameplay department, a problem that demonstrated why ambition alone is never enough. With Enslaved, Ninja Theory has taken everything good about Heavenly Sword and added the one crucial element — great gameplay.

And by God … the combination has never tasted so sweet. 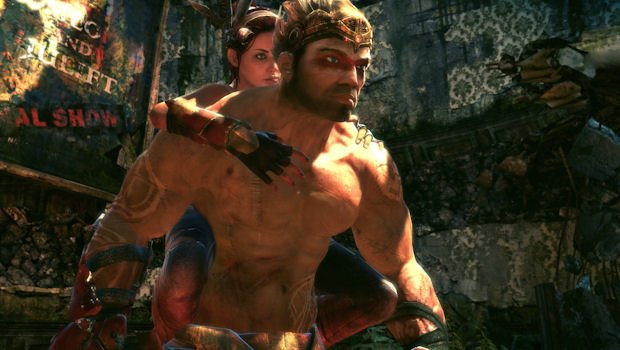 Enslaved tells the tale of Monkey, a hard-headed loner who must survive in a world where most of humanity is dead, and an army of violent robots stalks the ruins of civilization in its place. After barely bailing from a mech slave ship with his life, Monkey awakens in the wreckage of an escape pod and comes face to face with Trip, a young girl who has trapped him with a slaver’s headband that forces him to do as she says, and will kill him if Trip dies. Her terms: get her home, and she’ll let him go.

Thus starts an uneasy alliance between Monkey and Trip, an alliance that, during the course of the game, evolves and becomes something much more complex, deep, and quite believable. The power dynamic between the two characters constantly shifts as Trip holds Monkey’s life in her hands, yet is thoroughly dependent upon him to survive herself. Once a third character, the inimitable Pigsy, is introduced, you have a cast of characters more original, endearing and heartwarming than that of any other videogame released this year.

With its loose nods to the classic Chinese novel Journey to the West, some excellently written dialog and wonderful vocal performances, Enslaved does what games so often fail to do — bring its characters to life. The game feels like the odyssey it sets out to be, and the narrative really has it all: genuinely amusing comedy, surprisingly touching tragedy, and plenty of action. 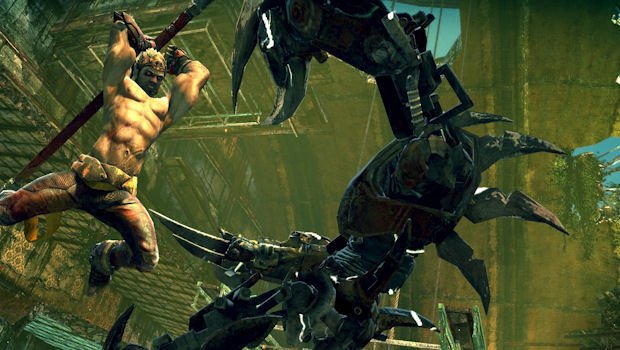 As far as action goes, Enslaved has a natural flow between environmental clambering and combat, with the game often seamlessly switching between the two. The game does this with cutscenes as well, giving the entire campaign a sense of natural progression that very few titles have ever achieved.

The climbing sections may or may not be a problem depending on what kind of gamer you are. Those who love titles like Prince of Persia may want to be careful with what they expect of Enslaved, as the climbing has not been designed to explicitly challenge the player.

Although later climbing sections have traps and pitfalls, Enslaved’s monkey business is more geared around delivering a sense of exploration and providing an empowering feeling of acrobatic skill. Indeed, there are no pitfall deaths to fear in this game. Monkey won’t jump off something unless he definitively can, and once you find a foothold, it’s a pretty clear path from A to B. The lack of challenge might upset some gamers, but I personally appreciated a title that wasn’t full of cheap pitfalls, and Monkey moves with such fluidity and speed that it’s much better to simply enjoy the ride. Very few games make climbing feel both swift and fun, but Enslaved has done it. 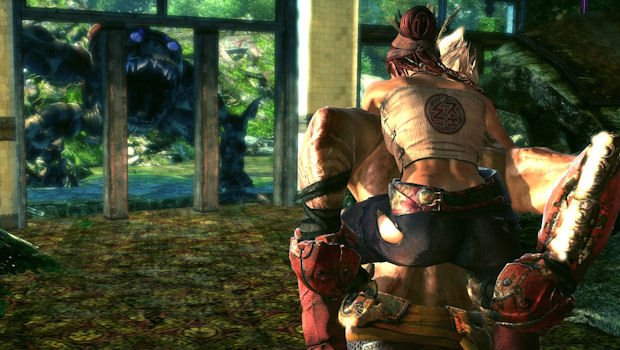 There are a few issues, however, with the game’s fussiness when it comes to climbing. There are some sections where Monkey clearly has to jump from one platform to another, but the game wants you to stand in one exact spot before letting you do so, and even if you’re a few inches away from the “sweet” spot, Monkey will simply stumble and refuse to jump. It can get a little annoying, and sometimes it’s just confusing, as one could easily be fooled into thinking they’ve gone the wrong way.

Combat is significantly more challenging, but it can be a mixed bag. Monkey is armed with a magic staff that performs light and strong attacks, and can also be wielded like a gun to shoot plasma or stun bolts. Combos are very simple and amount to little more than button mashing, but again, it’s the speed and fluidity that really makes it satisfying. Learning when best to stun enemies, perform a crowd-clearing move, block and counter is the key to victory, and while at times the combat is terrific fun, it can also get frustrating. Monkey’s dodge move, for instance, is borderline useless, and he also can’t cancel attack animations to block, which often means getting pummeled with cheap shots.

These issues aside, the combat is mostly pretty good, and feels varied enough despite the simplicity of the commands. Switching up between shooting and melee attacks, not to mention unlocking new moves and enhancements with “tech orbs” collected in each stage, makes the combat system feel much deeper than it actually is. It’s also somewhat nice to see health packs return to an action game. Health is pretty easy to come by, and you can lengthen the life bar and unlock a regen skill as you delve deeper. 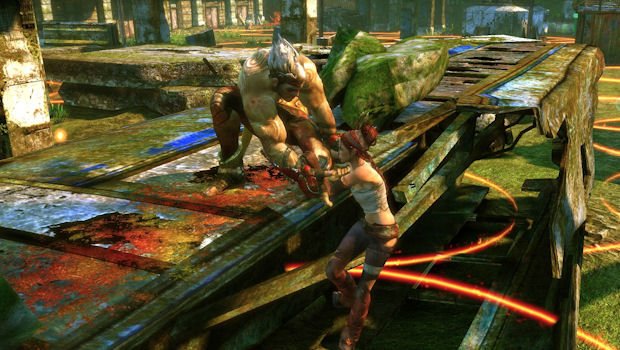 With the help of Trip and her pet mechanical dragonfly, Monkey can analyze various enemies and gain the ability to tell which mechs are defective. These defective mechs can be beaten with a special “takedown” move so they grant an extra advantage in battle. For instance, defective combat mechs can be taken down and then thrown at other enemies for explosive damage, while an electric-firing variant detonates an EMP shockwave that stuns surrounding foes. It gets a little tiresome watching the dragonfly scan everything at scripted intervals throughout the game, but the various takedown moves are incredibly cool, so it’s a fair trade.

All of this is fun enough, but it’s the interactions between Monkey and Trip that really put Enslaved ahead. In essence, the whole game is an escort mission, except that the person being escorted never becomes a hindrance. Trip is only very rarely in danger, and even then, she is able to temporarily stun enemies to give Monkey a chance to rescue her. Trip didn’t die once throughout my entire game, and I never felt like she was a burden.

At times, Monkey and Trip will need to create distractions for each other. Commanding Trip is a simple case of opening a command wheel, from which you can tell her to distract enemies or follow you. Monkey also has his own distraction command, and using these simple skills, the duo can avoid enemy gunfire and help each other progress. As with everything in Enslaved, it’s an incredibly simple concept, yet it just feels great to pull off. There are other co-op puzzles throughout the game, and while none of them tax the brain, they’re not annoying, either. 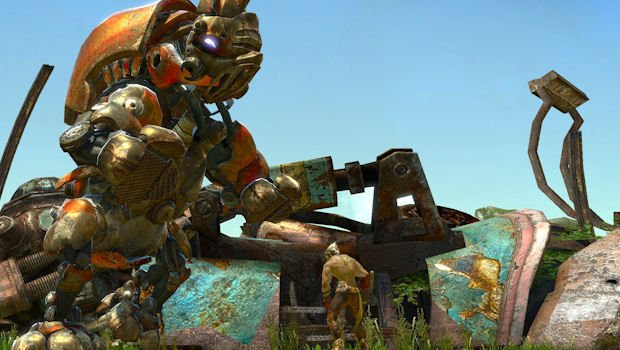 The star of the show, however, has to be the Cloud. A flying disc that Monkey can access at various points of the game, the Cloud scores points not only for being fun, but for being easy to control. It’s so easy for “vehicular” sections of an action game to fall apart, but by keeping the controls for both Monkey and the Cloud uniform, Ninja Theory has crafted an excellent little steed for our nimble hero. There are also a couple of fantastic boss fights that require use of the Cloud, and the only complaint I have is that the game doesn’t give us enough chances to use it. More chase sequences, or just a chance to use it more regularly than being limited to a few areas, would have really been wonderful.

A huge part of Enslaved is the art direction and graphics, and I have to say that they are simply stunning. The gorgeous, lush, colorful environments provide a totally different take on post-apocalyptic America than we’re used to, and in an industry full of brown and grey, it’s refreshing and breathtaking to see so many bright blues, striking greens, and deep reds. The design of the characters and the enemy mechs are also quite wonderful, and I’m convinced that there’s no other studio better at animating faces than this one.

Capping off the visuals is some of the best sound to grace a game in a long time. The evocative soundtrack is perfect, with a mixture of tunes that really capture the feel of the game. I’ve already mentioned the voice acting, but it bears repeating that the performances are stellar. Andy Serkis as Monkey steals the show, but Trip and especially Pigsy have their moments to shine. In fact, if Pigsy doesn’t become a cult character and a mainstay in top ten lists, I’ll be shocked. 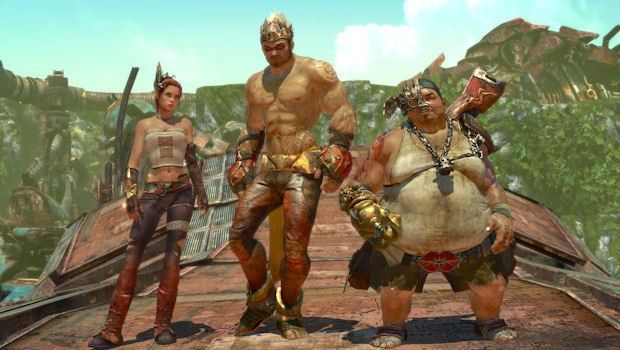 Enslaved: Odyssey to the West has its flaws, and those flaws are worn on the sleeve at all times. However, none of them tarnish what is, overall, one of the very best experiences released on a console in a long, long time. The game’s eight- to ten-hour quest truly does feel like a journey, one that is compelling, exciting, and incredibly memorable. Any time it threatens to frustrate the player, it wins back one’s heart with an exciting exploration sequence or a gorgeous vista. The marriage of Ninja Theory’s established narrative prowess to a combat system that manages to be fun and a world that never ceases to be breathtaking has created a surefire winner.

And you know what? I really liked the ending!