Well, maybe not biased, but I certainly have my preferences. Those preferences include 2D games, platformers, run-and-gun shooters, and games made by small, indie teams. That’s why I’ve been so pumped for Eduardo the Samurai Toaster. It’s a new 2D, hand-drawn, run-and-gun shooter made by a team of about four people. That’s pretty much everything I want in a new WiiWare game.

Oh, and of course, I want games that don’t suck. Does Eduardo pull that last part? Hit the jump for the full review. 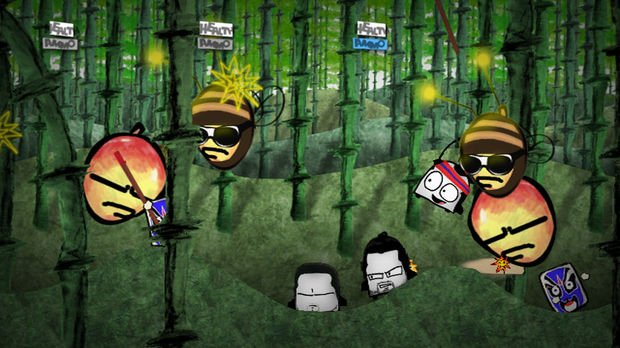 Eduardo the Samurai Toaster has almost all the elements it needs to be an “indie goes mainstream” classic in the same league as Alien Hominid and World of Goo, except for one problem: the game design. Or rather, the total lack of game design. Eduardo has no gameplay ideas at all. I can’t tell you how disappointed I am that this has happened again! I don’t know why it’s such a common ailment for an indie developer’s first commercial release to have great controls, graphics, and music, but lack any actual gameplay. But that’s the sickness that Eduardo the Samurai Toaster suffers from, and it’s the worst case I’ve seen in years.

Okay — just needed to get that off my chest. Let’s start this discussion over by focusing on the game’s biggest strength: its visuals. Despite being a game made on a very small budget, Eduardo looks fantastic. The backgrounds are nearly as pretty as those found in LittleBigPlanet, except instead of looking like a world of block toys, Eduardo‘s is a world made from cut out paper and mixed-media fine art. Starting up a new level and seeing the new backdrop often caused me to emit an audible gasp. The game has 13 levels in total, and I would say that eight out of those 13 have background art that I completely love. The other five are just great. None of them are bad. 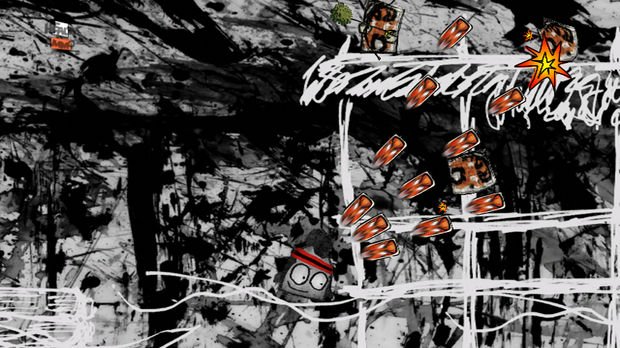 As for the in-game characters, they look good too. There isn’t a lot of traditional frame-by-frame animation here, but the flash-style squash and stretch stuff looks nice, and is expected given the game’s small team. The game starts with one of four smiling anthropomorphic toasters who fight kabuki pastries, carrots, bees, melons, and the occasional robot. It’s definitely got a Newgrounds vibe to it, so if you dig that sort of thing, you’ll have no complaints.

The controls are also solid, very responsive, and easy to learn. The game is controlled with the Wii remote in NES configuration, with jump and shoot mapped to the 1 and 2 buttons. The only issue I have with the controls is the throw button being mapped to the hard-to-hit B button on the flip side of the Wii remote. That said, I don’t really know what the throw is good for anyway. Just like in the Metal Slug games, if you get close enough to an enemy while shooting, you hit them with melee attack that usually kills with one hit, which is exactly what the throw does. For that reason, I think I only used the throw two or three times in the hour and a half it took me to beat the game. 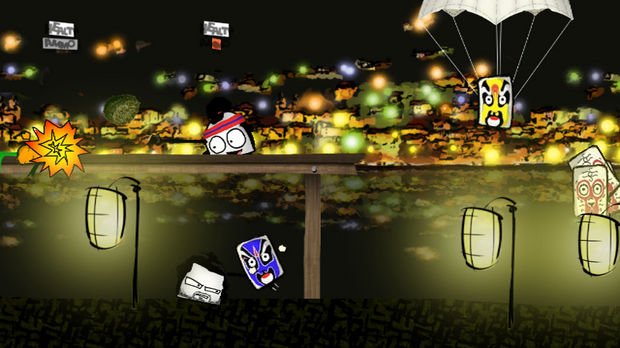 Yep, the game was over in just an hour and a half, and that’s just where the game design issues start. Don’t get me wrong; I don’t expect my WiiWare games to be huge in size, but if designed correctly, a relatively small game can take a long time to complete. Mega Man 9 and Gradius Rebirth are just two of many games on the service that may only take half an hour to beat on a speed run, but will take days of skill building to be able to do so. These are games that you really need to learn how to play. Environmental hazards, fighting bosses, and other staples of shmup/run-and-gun game design are staples for a reason. These types of games need that stuff to fend off monotony, and keep the player thinking. Eduardo lacks pretty much all of these staples. It consists of running from left to right, shooting in a few different directions from time to time, a little bit of incredibly easy platforming. And that’s it.

The game may have 13 levels, but once you’re 6 levels in, you’ll have already seen every enemy in the game. Some enemies are tougher than others, like the melons and the big bees. I guess you could call them mid-bosses, as the screen often stops scrolling when they show up, and wont start scrolling again until you kill them. Still, you’ll barely notice this half-attempt at game design, as whether the screen is scrolling or not, you’ll still be doing the same thing — shooting and running. 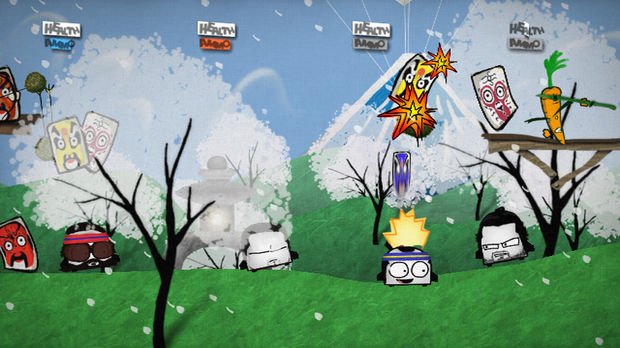 The game also lacks story. It starts with you walking by the credits screen, and ends with a bunch of random explosions and the words “THE END”. A game like this needs a story if it’s not going to punctuate the ends of levels and/or break up the constant running and shooting in some other way. It just shows a lack of care to plop a bunch of the same enemies into 13 totally uninspired level designs.

Oh wait, I almost forgot — there are two levels where you fly instead of run, and a little Segway vehicle in one of the later levels that allows you to shoot a triple laser. There are also a few weapons you can get by killing enemies, like a shotgun and a spread shot. All this stuff feels like it’s been directly ripped from other games, but I guess it shows a little bit of effort in terms of giving the game a sense of variety and progression. Much more effective is the way that in the last few levels of the game, all the characters change from looking like vector based computer art to hand-drawn doodles. That put a smile on my face, as it showed that the game’s developers clearly loved the look of their pre-production artwork, and I actually preferred the squigglevision-looking drawings to the slicker ones that you start off with in the game. 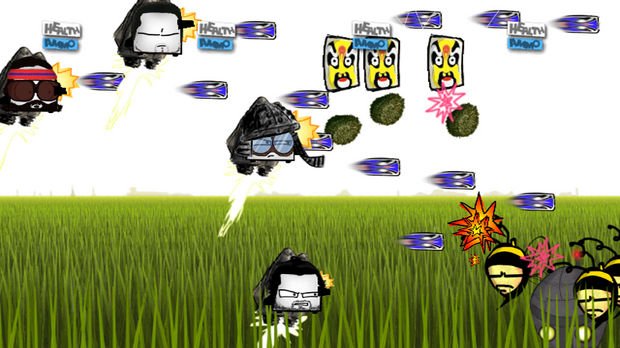 It’s also worth mentioning that the game doesn’t have a scoring system, and allows you to give yourself infinite lives from the start. Actually, even if you set the game to the hardest difficulty level and to only one life, the re-spawn points are so frequent that the game is still pretty easy. No scores and easy difficulty are bad design choices for a game in a genre that has always been about pushing for high scores and striving to keep from losing your last life.

The total lack of strategy needed to beat the game, the fact that all levels play pretty much identically, the lack of any notable level design, the lack of bosses, and the total lack of difficulty, make Eduardo feel like an hour and a half long tutorial mode of a good run-and-gun platformer that is yet to be made. It’s more fun to play multiplayer, but only marginally, and once you’ve beaten the game, the only reason to play it again is to look at the beautiful backgrounds. If you’re filthy rich and love hand drawn graphics, it’s worth the 800 points to play through Eduardo once just to look at it, but anyone with any money concerns or lack of interest in the run-and-gun genre should stay far away from this sucker.