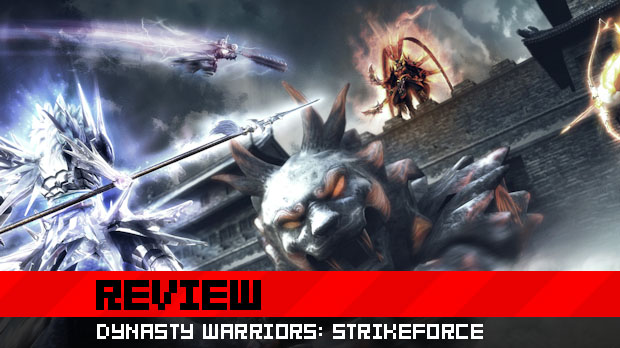 It’s no secret that the Dynasty Warriors series could do with some new life injected into it. Even as a fan of the series, I recognize that Koei has done little to keep the franchise fresh, and that a change of pace is always welcome.

It seems that Koei may have actually listened to criticism this time in the creating of Dynasty Warriors: Strikeforce, a game that freshens up the original formula with a focus on multiplayer and a structure that owes more than a little credit to Capcom’s popular Monster Hunter series.

Is this change for the better, or has Koei faltered in veering from its well worn path? Read on as we review Dynasty Warriors: Strikeforce.

As always, this latest Dynasty Warriors title focuses on the events that transpired in the later Han Dynasty of Ancient China, when the ancient country was ruptured between three rival factions, each warring for control. Players will choose a character based on one of China’s historical warriors and aid their chosen kingdom by murdering everything that moves in button mashing brawls.

Unlike previous games, which put you on one side of a huge army, players will travel into levels broken up into several arena-esque stages, either going solo or joined by three other human players in local four-player co-op battles. The scale is much smaller, but the enemies are much more aggressive this time around, especially the huge boss battles that won’t think twice about ganging up on you with multiple officers, extra lives and massive war machines.

Here’s where Strikeforce unfortunately trips itself up. While it’s quite feasible that four-player co-op will work in Japan, where the Dynasty Warriors series has a huge following, it’s unreasonable to assume that Western fans will have as much luck finding three other people who both own a PSP and have an interest in this game. I can only discuss Strikeforce from a single-player perspective, and since I review for a Western audience, I feel that discussing the game from such a perspective will be much more realistic.

Unfortunately, this game can be pure Hell for anybody willing to tough out its missions solo. The game has no single-player balancing whatsoever, doesn’t have online co-op, and won’t even provide you with three AI-controlled allies. Be warned that this game is HARD without any backup, as enemy bosses have no qualms about ganging up and bullying you with relentless attacks, sometimes able to drain your life bar to zero before you’ve even had a chance to attack. This will be the experience that most Western gamers will have with Strikeforce.

It’s a shame because, brutal difficulty aside, the game is very well made and one of the most addictive titles in the series. The customization options are varied and deep, allowing players to fine tune characters outside of simply leveling up their stats. Between missions, players will be able to use materials discovered in missions to create new weapons, Orbs and Chi. Players can also purchase sub-weapons to keep their characters feeling fresh. The only problems with these sub weapons is that Lu Bu’s Cross Pikes seem to render even your main weapons moot. They’re so powerful that you’ll rarely want to change them.

Orbs attach to weapons and have a number of benefits, such as increased attack power, higher defense or faster combos. Chi works in a similar way, except it’s equipped to the character’s hands and legs, and confers such abilities as double jumps, regenerating health and mid-air flight. Players will be able to improve the various stores and get access to superior weaponry and items by upgrading the city. City upgrades come in the form of officer cards, randomly acquired from passing characters who may appear in the city, and help to level up the facilities after each battle.

The combat has also received a number of overhauls. While the characters and their attacks are based upon Dynasty Warriors 6, there are a few new tricks, such as the dash which allows players to skim along the ground or through the air with a press of a shoulder button and close a distance between the player and enemies. Mid-air combat is also a new focus of the game, with brand new airborne attacks and special dash moves added in. The biggest and most publicized addition is of course the “Fury” mode, which players can invoke once their musou bar is full.

By pressing triangle and circle together, players will enter Fury mode, which is basically bringing Super Saiyan powers all up in your Ancient China. Every character has a brand new character model with some ridiculous designs, and will have a significant stat increase. Pressing the triangle and circle while in Fury will trade the transformation for a traditional Musou attack.

Perhaps the most welcome addition is a lock-on targeting system, that allows players to focus on the most important threat and direct all their attacks. Locking on is crucial, especially when directing a character’s dash. While it generally does a good job of focusing on the most important enemy, it sometimes makes ridiculous decisions and it’s very inconvenient having to use the D-Pad to change targets, especially since enemies won’t wait for you to attack them first.

Strikeforce makes the most of the PSP’s control system, with nearly every button requiring use for something. The D-Pad is not only used to switch targets, but to scroll through and use in-game items and move the camera. Meanwhile, players will continue to use the shoulder buttons to lock-on and dash, while hammering every face button the PSP has in order to access all the attacks. Unfortunately, this game will give you arthritis. It’s an intense game, and buttons will be pressed frantically, so much so that after my first few hours playing the game, my fingers and wrist felt broken. Have an ice pack on hand if you intend to spend a long time playing. It’s also quite easy to forget what every button does, making this the first ever Dynasty Warriors game where criticism can be had for complicated controls.

Visually, the game maintains Koei’s flare for character design, with the original Dynasty Warriors 6 models enhanced in some garishly wonderful ways for their new Fury counterparts. The game isn’t the best looking PSP game out there, but definitely looks nice on the system with no remarkable slowdown or ghosting to report. That said, the camera can sometimes be a real mess, especially struggling with the new aerial combat and lock-on system. As far as sound goes, many DW6 tunes have been completely remixed, and fans of the series’ over-the-top guitar wailing will be pleased.

Dynasty Warriors: Strikeforce is a damn fine game that could have been the best in the series had it not been geared so predominantly on a style of gameplay that just isn’t going to work for the territory it’s been released in. The addition of online play or just some AI allies could have made the game less frustrating, and it’s a real shame that only local multiplayer is supported. If you’re brave enough to go it alone and level up enough to kick Lu Bu’s cowardly arse, however, you’ll find a robust portable title that is more than capable of providing some compulsive playing, with plenty of features and even promised free DLC to keep the experience going.

If you already like Dynasty Warriors and have friends that do, or just a strong masochistic streak with regards to challenge, then it’s a definite buy.