Dynasty Warriors games aren’t exactly known for their critical acclaim, but at least one subset of the series has always managed to win favor with the press. Empires is a strategic expansion to the Warriors games, taking the assets from the main games and adding a political element. As a warlord of ancient China, players have to take over provinces, forge alliances and build armies in order to unify the land.

DW6: Empires makes a few changes to the formula, but remains the same game at heart. We’ve been playing it until our thumbs have broken, so read on for the full review of Dynasty Warriors 6: Empires. 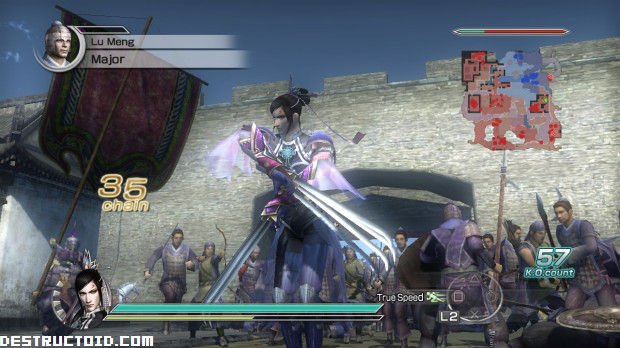 The major difference between this and previous Empires games is the fact that players no longer just have to take on the role of a ruler, but can also play as an officer in the army of another warlord. This key difference proves to make Empires a far more interesting game, with the officer mode proving far more fun than the ruler.

Starting out as a vagrant officer, players can move around China, looking for a fitting leader they wish to serve. Different rulers have different rates of pay, and the key is finding not only somebody who pays well, but is powerful and in a good position to unite China. An officer’s job is to help their master unite the country under his banner, but there’s plenty else to be doing along the way. 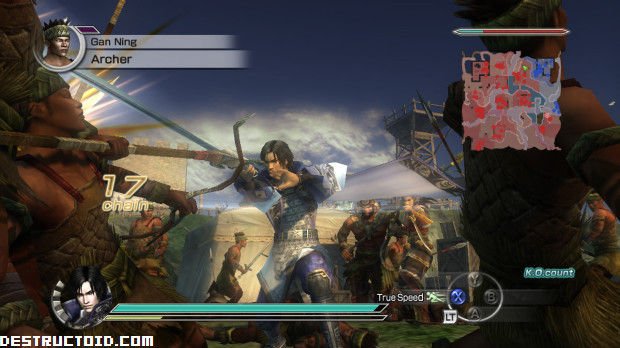 Officers will be given assingments by their ruler, and will be expected to either help invade other territories, defend their own provinces, or deliver messages by taking part in time trial races across battlefields. They can also take on freelance mercenary tasks, where they will have to eliminate bandits, escort other warriors, or take on giant tigers that shoot lightning. No idea why they can shoot lightning, but they can.

Players will be able to abandon their rulers, and can defect in the middle of battle. This can prove advantageous when faced with a superior enemy who is likely to crush your army, and it’s always fun to be a backstabber. If you choose to break away from your master and become a vagrant, you can even rise up against your former ruler and make a bid to take over his land, becoming a ruler yourself. 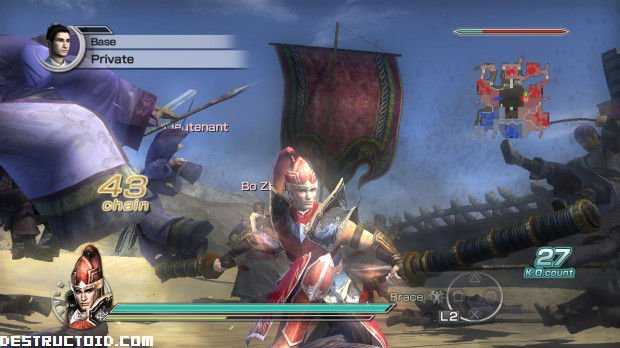 Sadly, life as a ruler seems far less fun. The diplomacy and politics have been stripped down. You no longer get as much opportunity to form alliances, nor do you get to govern your people as either a saint or a tyrant anymore. You do get to draw “cards” which use up “resources,” but unlike the last games, these cards are almost all focused on invading territory, with no eye turned toward the politics. It seems that there is simply far more to do as a simple vassal than as a leader of the people, which is a shame.

During downtime, you’ll be able to use the gold you’ve acquired through pay, taxes, and mission rewards to purchase a number of upgrades and items. By combining gold and resources known as gems, you can strengthen your weapon and bestow on it a number of extra benefits such as elemental attacks and extra attack reach. New to the series are special attacks, which are assigned to one of four slots and activated by holding the left trigger while hitting the corresponding face button. These special moves can summon huge fireballs, steal gold from enemies with each attack, or lower the opponent’s defense. There are plenty of specials to buy and experiment with. 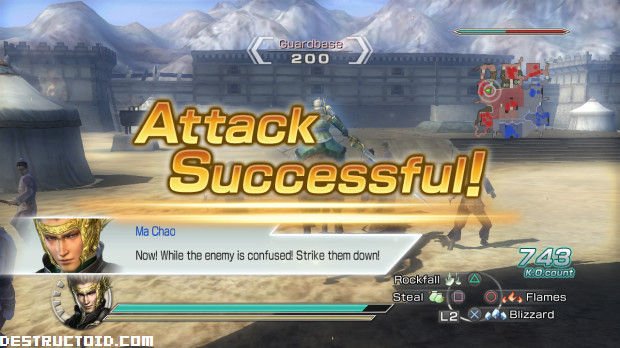 As with all Empires games, the hack n’ slash battles have been given a more strategic element to keep things interesting. Rather than simply slog one’s way to the enemy commander, players will have to take over enemy bases while defending their own. The idea is to create a chain of allied bases leading from your main camp to the enemy’s main camp. Once this has been done, players can assault the enemy camp and lure out the commander.

During battle, one will be able to issue orders to allies, and officers will also be able to perform specific optional tasks to earn experience, gold and gems. Koei has seemingly abandoned the Renbu system as a failed experiment, and players will simply unlock longer combos as their weapons level, which is quite welcome, since the idea of attacking constantly to keep one’s combo level high was interesting, but more work than it needed to be. 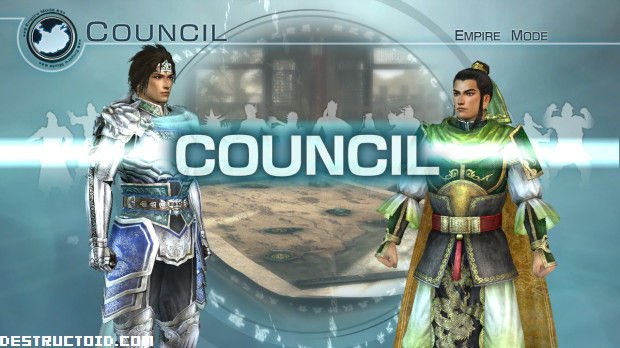 Empires throws in a few new features as far as characters go, by bringing over the de-cloned movesets and weapons from Dynasty Warriors 6: Special, which appeared only on the PS2. Characters like Zhang He and Taishi Ci get back their traditional weapons with brand new moves. While this still doesn’t make up for the fact that some character movesets are still cloned at least four times, it’s at least good to be able to get Zhang He’s claws back. Meng Huo has also been (re)added as a playable character, with an all-new Nanman stage backing him up.

Making its return from Dynasty Warriors 4 is the long-forgotten Edit Officer mode, where players can create their very own warriors. The customization is not as rich and deep as most character edit modes, but it’s still a cool addition, and players can unlock new costume parts by playing through the main game. There is scope to create some really silly characters,  and fans of the series ought to find quite a bit of fun in trying to create their own personal warriors. 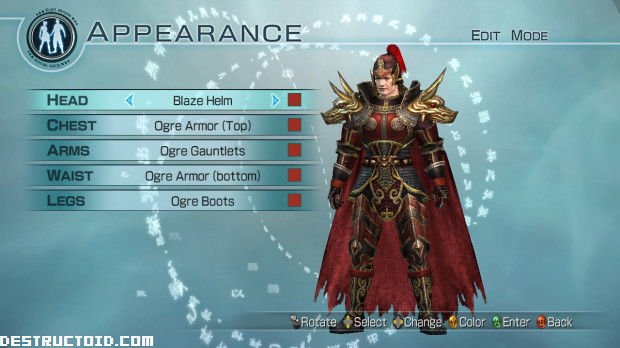 A special note should also be made of the music. I’ve always been a fan of the series’ ridiculous-yet-epic hair metal soundtrack, and that’s why I’m delighted by the fact the DW6: Empires contains almost every single track from every single Dynasty Warriors game from the second title onwards. This includes all remixes, which means there are about five or six Lu Bu themes. The music can be randomized in battles and strategy screens, and players can even select their own music during each stage’s loading screen. It’s a terrific addition that adds real fan service.

Speaking of fan service, players can also earn points during the game to be spent on unlockables, ranging from pictures, new character colors and voice acting samples. For a true fan, the game succeeds in becoming a complete package. 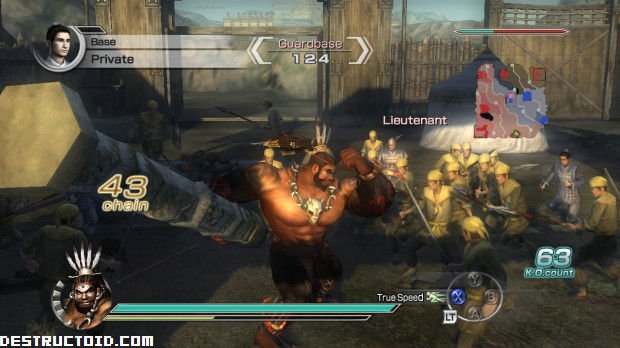 Dynasty Warriors 6: Empires is a great addition to the series, and is a far deeper, more replayable title than the last main sequel. Fans will find this to be a very enjoyable title, with a lot of content and plenty of reason to keep going back and attempting to take over China. It’s been a while since a Dynasty Warriors game was this addictive, and that’s a huge bonus. While established fans will find the game to be incredibly fun, it’s highly doubtful that longtime DW haters will be drawn into the series by this new one. Definitely a worthy purchase for those that like Koei’s work.