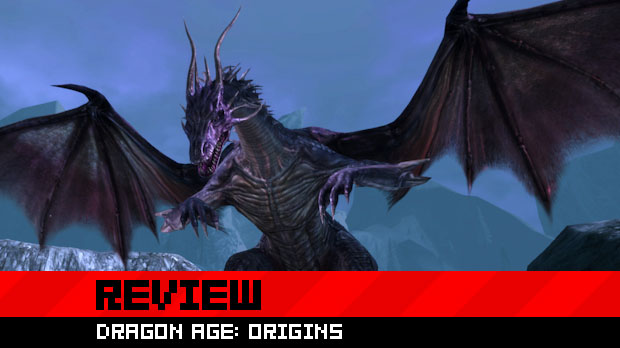 What do you do when you stop making games for one of the biggest roleplaying franchises of all time? If you’re BioWare, the answer is easy — make your own roleplaying franchise and start again from scratch. Dragon Age: Origins sees BioWare return to the world of dark fantasy since it disassociated from the critically acclaimed Baldur’s Gate games, bringing an entirely new world, characters and story to the genre in the hopes of creating a brand new fantasy RPG series.

BioWare has clearly spent a long time crafting Ferelden, the realm in which Dragon Age takes place, and the many inhabitants found within. Much work has also gone into the combat and tactical system, and there is no doubt that this is a BioWare production through and through. Is this an entirely good thing, or does Dragon Age fall just short of greatness by sticking just a bit too close to the BioWare traditions?

Read on for the full review of Dragon Age: Origins.

Ferelden’s history books state that, many centuries ago, a group of mages tried to usurp Heaven and The Maker, but in doing so, unleashed an evil terror upon the world that turned them into the hated Dark Spawn — a race of zombie-like creatures that hide underground and emerge every few centuries to instigate a “Blight” and attempt to take over the world. Standing in the way of the Dark Spawn are the Grey Wardens, an order of warriors who have remained throughout history to push the Dark Spawn horde back into hiding.

Players take on the role of the latest Grey Warden recruit, enlisted by the mysterious Duncan to face a re-merging Dark Spawn threat and its leader, The Arch Demon. Dragon Age: Origins starts with one of six completely unique stories depending on the race and background the player has chosen. One can choose to be a human noble, a mage, a Dalish elf, a city elf, a dwarven noble or a dwarven commoner. The “origin” stories themselves take at least an hour apiece to complete, and take the form of self-contained stories that manage to entertain in their own right. However, these sections are a mere taste of what comes next, as the game opens up into a massive RPG that will take at least forty hours to finish.

It has to be said that the world crafted by BioWare is absolutely wonderful. The lore is intriguing, with unique takes on the relationships between elves, dwarves and humans. The game also manages quite a few successful attempts at humor. Most importantly, however, the amount of choice in the game is superb. There are moments that really make the player think about the consequences of their actions, and many of the dilemmas give you options that are not clearly defined as “good” or “evil.” It’s up to the player to determine the morality of their actions, which is a great step forward for RPG gameplay.

As an experience, Dragon Age has few rivals that can stand up in comparison. It’s a wonderful feeling to be immersed in the world of Ferelden and engage the numerous allied characters, such as the sarcastic Alistair or the bird-hating, misanthropic golem Shale. The main plot of the game is also remarkably interesting, full of political intrigue and moral implication that help spice up an otherwise typical “save the world from evil” narrative.

The game’s combat system will be familiar to players of the Knights of the Old Republic games. Characters automatically engage in attacks while players select various skills for the characters to pull off. The game’s biggest draw is the “Tactics” system, which offers a ridiculously deep set of commands and allow allied characters to act according to player specifications when not being directly controlled. Unfortunately, however, while the sheer amount of choice on offer is amazing, this bold new system also happens to be the game’s biggest downfall.

It pains me to say it, but the tactics system doesn’t work even half as well as BioWare would like us to think it does. For the first fifteen hours or so, players don’t have to worry about it, but once the game ramps up the difficulty, allied characters gladly march into death, helped along by the fact that the A.I is pure garbage. Suddenly, players find themselves bogged down in endless and pedantic micromanagement as they blindly experiment with different tactics in a vain bid to keep allies alive. The pre-set tactics provided for players that don’t like micromanagement are worthless, and require constant tweaking.

Don’t get me wrong, I like tinkering with stats and playing with a game’s twiddly knobs, but the tinkering is excessive in Dragon Age to the point of getting in the way of the game. It’s also frustrating to spend ages trying to second-guess the game’s A.I and craft a tactic set that works, only to have the allied characters continue to run around and get themselves killed.

Even worse is the fact that no amount of tactics can craft a team capable of dealing with the myriad obstacles constantly thrown at players. Be it tank-like enemy warriors that love to gang up on one player and systematically take the team down, archers that hide away and stun players with flights of arrows, or mages that can stun, freeze, drain and explode the allied party, often at once, there is too much to deal with at any given time, and players can easily be overwhelmed by the sheer clusterfuck of battle. I’d say you need a party of eight to deal with some of the huge battles in the game. Four doesn’t feel like enough when twenty armed soldiers jump you and they have two mages with fireball spells backing them up.

The difficulty in Dragon Age is erratic at best and completely unbalanced at worst. Some dungeons are a breeze to get through for the first hour, and then suddenly there will be a room full of enemies that seem ludicrously powered up and completely overrun the player’s team. These difficulty spikes appear randomly and without warning.

The game clearly wants to be treated like some sort of RTS, encouraging players to move allies into prime positions depending on their class. However, battles are just too chaotic and messy for any real RTS elements to shine through. This isn’t helped by the fact that the only way to accurately position allies is to manually take control of them, but as soon as you give control back to the A.I, it will just carry on doing what it does best — getting bullied by the enemy and dying within seconds. In the same way that Mass Effect tried to be a methodical shooter but put players up against fast-paced melee attackers, Dragon Age desperately wants to be a strategy game, but has made the game look, feel and play like a mindless, crazy hack n’ slash.

It’s worth noting that PC gamers get a more tactical perspective of battle and have access to hotkeys. These additions will surely help and make the PC game the infinitely superior choice. In comparison, the console versions cannot handle the kind of battles BioWare have created. This game probably should not have been released on the PS3 or Xbox 360. Even with the extra tools, however, the PC version still seems to suffer from many of the same problems, from what I have played of that version.

A number of other issues get in the way as well. Dragon Age is stingy on the healing items, with each shop you encounter selling maybe four or five of them and never restocking. In a game like this, where constant healing is necessary, it doesn’t make sense. Skills like Herbalism let players make their own items, but of course, this requires finding the right ingredients, which can be a mission in and of itself.

The game also seems shockingly light on loot. I spent much of my game in the same armor, thanks to the fact that equipment on sale was either worthless, or required insane amounts of leveling up to acquire the strength to use. Much of the joy in RPGs comes from upgrading equipment, but the chances to do that in this game are limited until you’ve leveled up enough, and since it can take hours to achieve one level in Dragon Age, that’s a lot of time spent in the same rusty armor.

Navigation in the game is a real bitch. I found that I often didn’t want to complete some of the sub-quests, simply because it would have taken too much effort to find them. There is no compass system like in Oblivion, and many of the quests require you to simply guess where they are. If you’re lucky enough to be in the same area as a quest location, you’ll see a marker that directs you, but if the location is in another building or another city, good luck finding it. The World Map does not tell you where quest locations are, and marking your chosen quest as active seems to do absolutely nothing to help. The fact that quite a few quests consist of “Go to several different locations around the world and try to find where we’ve hidden stuff,” adds insult to injury.

It sounds like I absolutely hated my time with Dragon Age, but that wouldn’t be fair to say. It gave me many hours of fun, and I tried my hardest to love it. At the very least, the first fifteen hours were some of the best RPG gameplay I’ve enjoyed in the past few years, and that’s more than can be said for most games out there. Dragon Age simply lets itself down, however, with its conflicted gameplay, imbalanced, random difficulty and poor A.I. If characters could look after themselves a little more, perhaps everything else would have been fine, but after hours of micromanagement and hair-pulling frustration, I can’t say that I was sad to see the game’s credits roll.

It’s a real shame, because Dragon Age: Origins provides an incredibly memorable experience full of wonderful touches and beautiful flourishes. The combat system’s core is robust and, with a bit more tweaking and less of a focus on tactics, could have been a truly incredible accomplishment in the RPG genre.

The game looks pretty decent, although it isn’t by far the best looking game of the year. A few glitches do pop up again to truly let us know this is a BioWare game, the most common being characters that move their mouths but don’t say anything. The real tragedy here is that the voice acting is pretty damn great, with characters like Shale and Alistair standing out as wonderful characters. The vocal talents of Tim Curry are criminally underutilized, however.

Dragon Age: Origins is a game that once looked set to be the best RPG of the year. It has a great story, high production values, and one of the most immersive worlds ever created in a videogame. Tragically, Origins‘ considerable high points have been squandered on a frustrating, unbalanced combat system, and a customizable A.I that’s just too broken to adequately customize. Is Dragon Age a good game? Yes, it most assuredly is, providing an experience that will stick in the mind for a very long time. However, it is fitting that one of Origins‘ main themes is how seemingly good choices can have bad consequences. That message is something the game’s design reinforces throughout.

You should definitely play this game if you love RPGs, and for BioWare nuts, this is an easy buy. However, its status as a classic is questionable, and I wouldn’t expect this to replace anybody’s favorite RPG anytime soon.