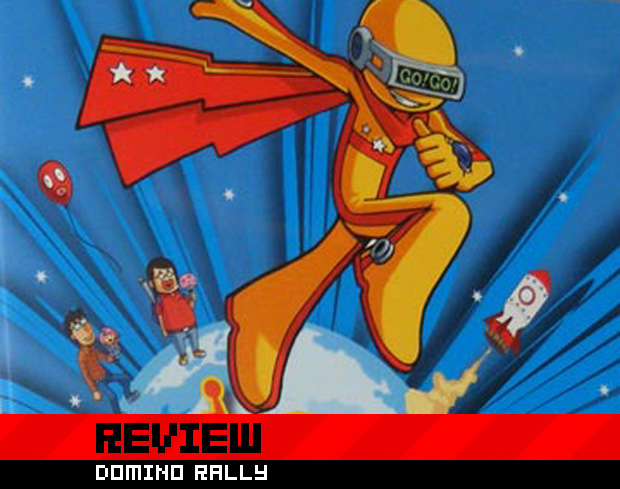 As far as I know, Domino Rally has not yet been released in stores. It’s also not available on GameStop’s site, or most other online retail outlets. The game came out over a month ago, but I think the only places you can get buy it are eBay and BestSKU. There isn’t even a listing for it on the publisher’s Web site anymore. Chances of this game going on to become a collector’s item are fairly high.

If you are a certain kind of gamer, then that’s all you need to know before deciding that this game is a worthwhile purchase, even if you never unwrap it (or for die-hard collectors, even more so). For the rest of you — the people who aren’t willing to risk $20 on a weird-looking semi-sequel to an obscure PS1 sleeper hit that GameStop is to scared to sell — I submit this review.

Read on to discover for yourself if Domino Rally is in fact worth your “time and cash.”

OK, bad news time for the 1% of Dtoid readers (like me) who feel that No One Can Stop Mr Domino! is an under-appreciated masterpiece; Domino Rally plays almost nothing like that PS1 cult-classic. Where Mr. Domino made dominoes appear behind him to set up a (hopefully) awesome domino chain reaction, Minon (Domino Rally‘s main character) makes dominoes appear in front of him, so that he can… walk on them. Why? Well, despite being a superhero, Minon can’t walk on the ground. He can only walk on top of things that happen to be lined up like dominoes (sections of grass, lines of people, rows of buildings), and when he runs out of stuff like that to walk on, he needs your help.

Thus we have Domino Rally‘s “very special” gameplay hook, and the main problem that I have with the game. All the challenge in Domino Rally comes from trying to manage the one thing that just about every other game ever permits you do with no effort at all: walk around the game world. The fact that the developers of this game managed to make just walking around a challange is something of an accomplishment.

Like Mr. Domino, Minon is always walking forward. Unlike Mr. Domino, Minon can be stopped — quite easily, actually. In order to keep Minon from falling on the ground (which he hates… to death), you need to constantly point the Wii Remote where you want dominoes to show up next. It’s like you’re dealing with King James Earl Jones from Coming to America, who — as all fans of classic cinema will recall — refused to walk anywhere that wasn’t pre-adorned with rose petals thrown by pretty girls. Come to think of it, if this game starred James Earl Jones, and turned me into a pretty girl, I might not have minded so much (but I guess that’s obvious).

Walking on the ground is Minon’s kryptonite. So what are his superpowers? Well, he can grow and shrink to any size necessary depending on pre-scripted events, but that’s about it. Pretty lame, right? It doesn’t really matter, though, because the blocky, clueless people of Domino Rally still treat Minon like the ultimate hero. In each of the game’s levels, someone asks Minon to help in the midst of a “huge catastrophe.” If you’re an aging pop idol who needs your unappreciative audience trampled, call Minon. He’ll crush their heads ’til the hearts come out. If you’re an elephant that wants a kiss, but feels too self-conscious in a zoo full of animals hootin’ and hollerin’, call Minon. He’ll walk across every penguin, hippo, lion and chimp in the place, sending a anti-cockblocking message like none other.

It’s a little bit like Elite Beat Agents, but with a whole lot of Katamari-ness thrown in. This game is even more of a Katamari tribute than Katamari Tribute. Everything from the humor to the blocky game world to the music, and even the simple gameplay, all screams Katamari. The zoo level in particular, with its catchy japanese comedy-metal theme song and super-square animal characher models, could easily fool many an undiscerning eye into believing that Domino Rally is a Katamari spin-off.

In terms of raw gameplay, there is a little more to Domino Rally than previously mentioned. Each level of the game’s eight levels provides different hero-goals to achieve, but they vary depending on the situation. Sometimes you just need to get to a specific place on the map, while other times you need to run over certain pre-determined things, be they skyscrapers, zoo animals, or parts to a vacuum cleaner alien disguise. Also present for added spice are some weird motion-controlled bits. If you shake the Wii Remote on time with Minon’s steps, he’ll start to speed up, which requires you to speed up your shakes. You’ll also have to use the Wii Remote’s tilt controls to balance Minon if he hits a dead end and starts to fall off an object. If you’re playing Domino Rally well, you’ll be aiming at the screen and laying down dominoes at a record pace, staying on top of people and things as much as possible, and shaking the Wii Remote at breakneck speeds like a goddamn maniac. It can actually be a bit of a rush when you get your momentum going.

Now for some more bad news. On my first play-through, I beat the game in about two and a half hours. That includes playing through the twenty-minute zoo level three times due to cheap deaths. Yeah, cheap deaths: they suck, and they aren’t uncommon in Domino Rally. Since much of the game involves just walking around and finding stuff, certain levels (like the zoo level) require you to play for a while just to learn where everything is. Since you can only walk where dominoes can be laid, it’s really hard to get where you want to go all the time. And since most levels have a time limit, you may “die” because due to bad luck, you just happened to explore the wrong areas before time ran out. Once you know where everything is, though, most levels can be knocked out in five or ten minutes.

There is a two-player versus mode that adds a little bit of replay value, but not too much. It plays like the single-player, but in a split-screen race, with limited speed-up/slow-down power-ups and attacks. It’s not all that compelling, but it’s not broken or anything.Like the rest of the game, I could see drunk non-gamers enjoying it, or people who really feel the need to define themselves by affiliation with super-weird, super-unpopular videogames, but that’s about it.

A little better are the game’s hidden unlockables. Honestly, Domino Rally may contain the funniest, most pleasantly surprising unlockables ever. If you head off the beaten path in the single-player mode, you may find a question mark. This is a “memory,” and it just might be awesome. In this game, a “memory” is a random piece of artwork that usually doesn’t have anything to do with anything, and is often completely which is why I love them so much. I haven’t found them all yet (there are reportedly 90 or so in all), but out of the 40 I’ve found, the “Strawberry Prince,” which depicts a strawberry-headed man riding a sleigh guided by pigs whose sole reason for existence is to spread the word about strawberries, is perhaps my favorite.

Man, I really feel like I’m forgetting something here, but even if I am, it probably doesn’t matter. Here’s all you really need to know about this game. Based on the virtues of its gameplay alone, Domino Rally is a total 4/10. The game is neither fun, nor not fun, it just… is. You walk around on dominoes, sometimes quickly, sometimes slowly, sometimes in entertaining places, sometimes in boring places, and that’s it. The need to constantly interact with the game via pointing, clicking, or shaking, will hold your attention, but it won’t make you feel all that good or bad.

That said, fans of weird Japanese games with upbeat, funny music, uncommon gameplay, and low-fi graphics like the Katamari series, Incredible Crisis, One Piece Mansion, No One Can Stop Mr. Domino!, and Ribbit King! should buy this game. For everyone else, I’d tell you to rent it, but I don’t think that’s possible. It’s buy or nothing on this one, and seeing how there is a very good chance that rare games like this will go up in value and not down, you could just buy it and then sell it again later for a profit if you’re on the fence.

Oh yeah, that’s what I forgot to say: all the game’s voice actors have British accents. I like that.

Score: 6.0– Alright (6s may be slightly above average or simply inoffensive. Fans of the genre should enjoy them a bit, but a fair few will be left unfulfilled.)