Teams of competing dwarves mine treasure for their king, while battling familiar monsters along the way. For such a videogame-y concept, you’d think more games would have explored this idea.

As near as I can tell, though, the closest thing to Delve Deeper is a non-existent lovechild between Dungeon Keeper and Worms. You take the room crafting of the former, the silly, turn-based nature of the latter, and present it in a (mostly) slick old-school aesthetic.

That’s pretty much how I would describe Delve Deeper if a crazed gunman forced me to talk about recent independent games I’ve been playing, anyway.

As mentioned above, the basic goal of Delve Deeper is to mine more gold than your fellow dwarves. The mining itself is the easy part; cashing it in is another story. You begin by picking a five-man team, which can be made up of a few different unit types: scouts, miners, and fighters.

Fighters can hold less inventory, but are your best bet against other dwarves and the AI-controlled creeps. Scouts can move further across the map in a single turn, although their health is significantly lower. And miners, well — they are sort of the middle ground. 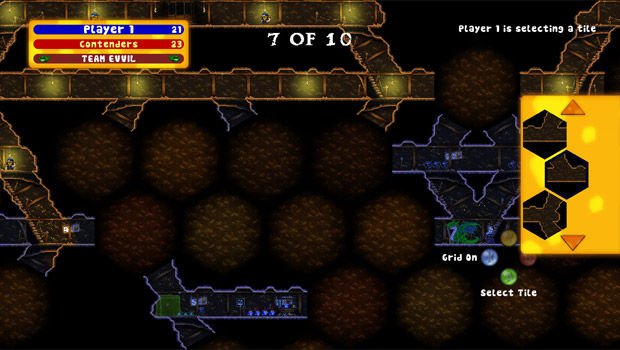 On any given turn, you’ll start by carving out a section of the tile-based map into a navigable room. By doing so, your troops will be able to access more treasure, and if you are feeling saucy, you can even carve out areas near your opponents to lure monsters into their base. Afterward, you get to send your dwarves down into the depths.

By ending your turn, any dwarves on a mineral reserve will harvest treasure, and battles — whether they be against creatures or another team — will commence. These entirely passive fights consist of units taking turns at hitting one another until one side is dead.

In the case of dwarves losing, they go down for a turn, drop their loot, and come back with a single health point; there is no permanent death. Healing is done back at your base camp, or by way of fairies who are scattered across the map.

There’s some risk-reward style of play at work here. You can royally screw yourself over if you get too greedy, but not necessarily to the point where you can’t make a comeback. Losing battles never feels overly harsh, which is a good thing considering it can happen quite frequently.

To win, you must have more loot than any other team when the final turn ends. Harvesting isn’t enough, though — you have to either drop your prized possessions off at your surface-level camp, or at a third-party depot, which will take a cut of your money for the convenience. There are also relics to be found, too. These can positively or negatively affect certain elements like your treasure stash or unit strength. 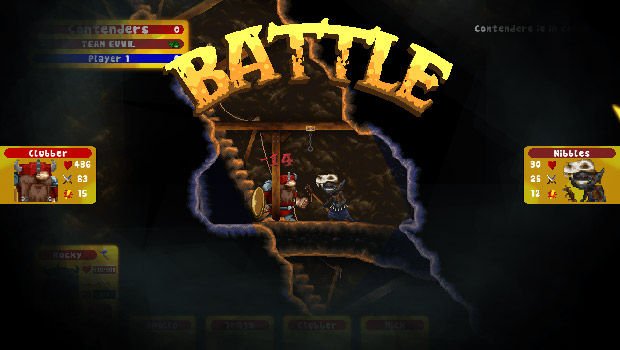 You can specify how many competitors you would like to face, how many turns you want a given match to feature, and if you’re into the user-created content scene, you can even design your own levels. Personally, I disliked having a four-team game, as I’m quite impatient when it comes to waiting for other players in general. Thankfully, you are allowed to roll however you’d like, without penalty.

The retro aesthetic really works well for this type of experience. There’s a nice attention to detail in the sprite work, but not so much so that you are overwhelmed when figuring out where to place your troops. That said, the art style isn’t as consistent as I would have liked. The backgrounds, text, and some elements of the HUD don’t quite fit in line with the throwback vibe.

The bigger issues I had with Delve Deeper, however, have to do with the camera and tile placement. Simply put, the camera is erratic. There’s a startling lack of transition when it hops from character to character, and the effect is made even more annoying when the screen bounces between the monster units. The worst part is, they usually aren’t even moving across the map when this happens.

As for the tile placement system, it’s overly complicated for what it is. There is a multi-step process in which you have to select an empty space, choose what type of tunnel you want based on depth, pick a pre-existing layout (straight, X-shaped, etc.), and hope to God that it works.

Otherwise, you have to start the whole process over again. Ideally, the game should just let you select a tile and automatically give you a list of working tunnel designs to decide from. 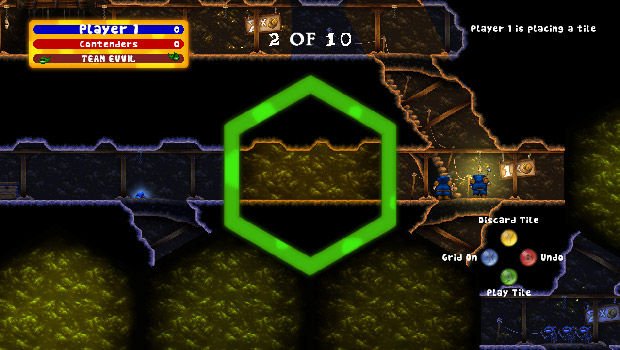 These problems are the kind that you sort of get used to over time, sure, but they are worth pointing out regardless. Delve Deeper also supports the Xbox 360 controller, although I feel like there should be an asterisk there. Currently, there are occasionally some pop-up messages in-game that require a mouse click, even when playing with a gamepad. Game-breaking? Not really. Irritating? Absolutely.

Delve Deeper is one of those flawed, but much-loved gems. Lunar Giant was wise to set the game at such a low-risk price; you can get quite a lot out of it, if you are willing to put up with some minor to not-so-minor annoyances. When you get into a groove with this game, time slips past you.

Hopefully, the complaints I brought up here can be addressed in future updates. If not, Delve Deeper is still something I can recommend to turn-based strategy nuts who are open-minded enough to give smaller titles a chance. Be sure to demo it, if you are intrigued.