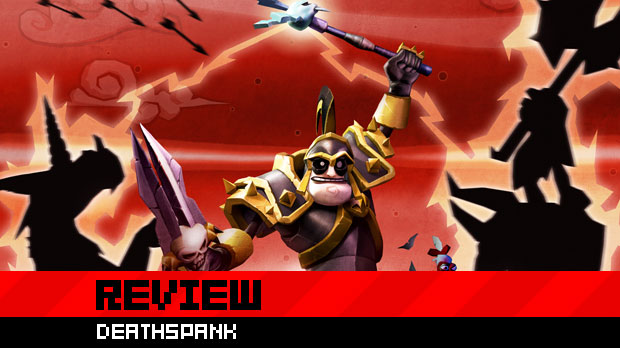 With the popularity of Blizzard’s Diablo, and the relative success of laughter among human beings, what took DeathSpank so long to exist?

From Hothead Games with the help of the funny bone of Monkey Island and Maniac Mansion co-creator Ron Gilbert, DeathSpank honors the long-standing gaming tradition of killing things for goodies, while adding a touch of off-the-wall hilarity. The result is the only game in which you’re encouraged to kick the crap out of demons…  because you need to actually collect their poop. Of course.

Given that scenario, you should already have your answer as to whether or not DeathSpank is worth your time and cash. But if you’re looking for more, you’ll find that after the jump.

DeathSpank has players controlling the titular hero as he hacks, bashes, and shoots his way to achieve a lifelong goal of obtaining a powerful artifact, known as… the Artifact. The basics should already be familiar to anyone who’s played or even heard of Blizzard’s Diablo — get quests, kill a bunch of stuff while completing said quests, all the while leveling up your character and picking up a ton of sweet loot along the way.

As a console game, DeathSpank’s gameplay is a little deeper than pointing-and-clicking on enemies, unlike Blizzard’s popular title. The emphasis here is on action, the player completely in control over DeathSpank’s attacks, with a different weapon assigned to each of the controller’s face buttons. The game has a delightful third-person action feel with all of the benefits — the goodies, the upgrades — of a classic action RPG.

It’s not all about button mashing, either. Sure, you could head into battle and spam a single attack, but what fun is that? Hothead entices players to explore all of their combat options with a “Chain Attack” combo system. By using varied weapons in combat, and then mixing up attacks with proper timing and skill, you can create combo chains; score perfect chain (x7) and send your enemies flying. The added benefit here (as if kicking major ass wasn’t enough) is that you’ll quickly fill your “Justice Meter,” which can be used to unleash special attacks associated with various weapons. Chaining attacks is exceedingly satisfying, experimenting with various weapon combinations nearly as addictive as finding them in the first place. There’s an ample number of items to unearth, from armor to weapons, each with their own unique look, properties, and appropriately silly name. 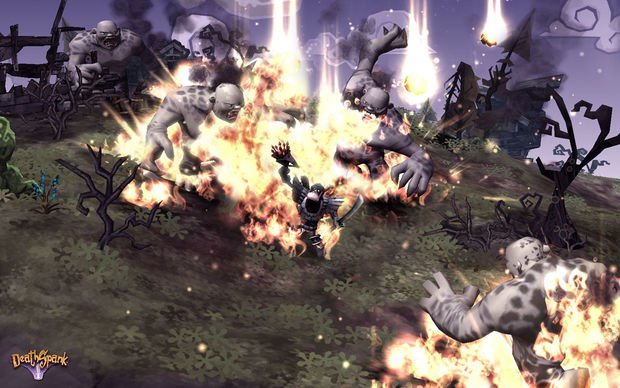 DeathSpank is also a rather expansive game, especially for an digital download release. Outside of the main quest (“Important Things I Need to Do”), with objectives spread across a sprawling world map, there’s no lack of optional side quests (“Unimportant Things I Need To Do”). They’re classic quests of standard role-playing game variety — find this, get that, bring that here, kill stuff. It’s how the quests are presented — gift-wrapped, with a cheeky Ron Gilbert bow on top of it — that sets DeathSpank apart. As an example, one quest has you gathering demon dung for a farmer. The only way to procure said dung is to (literally) knock the shit out of the fiends using the “Demon Poop Hammer.” High brow humor this isn’t, but like Monkey Island, DeathSpank’s laughs span from sophomoric and subtle, with plenty of laughs in between.

While DeathSpank is mostly quality across the board, from its visuals to its voice acting to the sheer number of things to see and do, it’s not without a few niggling issues. For one, in a game where picking up the “Next Best Thing” in weaponry is key, I found it tough to figure out whether or not I had actually done just that. The game’s inventory screen is cluttered with information, much of it necessary, but not all of it in the right place at the right time. I had trouble figuring out whether or not an item in my sack was better than one I was currently holding; selecting it would tell me the items properties, but in order to compare, I’d have to navigate away from that item to check on what was currently equipped.

Having to bounce back and forth between items was a bit irritating, largely because it would have been easy for the game to simply communicate “Yes, this is the new hotness.” To the game’s credit, it makes this rather easy with armor; there’s an option to have it auto-equip the “best” armor in your inventory. Considering their various effects, you’ll definitely want to a role in choosing your weapons, though, I just wish the game provided more information (in one place) for me to make those decisions. 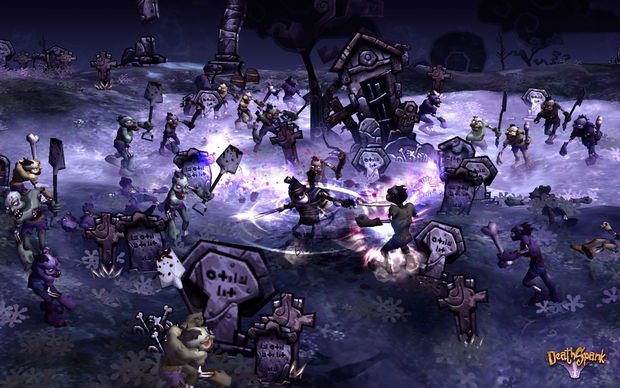 Local-only cooperative gameplay is also included as a feature in DeathSpank, with a second player able to drop-in and drop-out at any time to fight alongside a partner as the magician, Sparkles. As Sparkles, players can use basic attacks to help dispatch enemies, as well as provide healing to DeathSpank when battles get too heated. But that’s about it. As Sparkles you can’t pick up loot, you can’t equip the countless items scattered throughout the world, and you can’t interact with NPCs or quest items in the environment. You’re basically just a tag-along, and it’s not particularly fun. As Sparkles, you’ll be annoyed that your role is so limited; as DeathSpank, you’ll be thankful for the restorative benefits, but mostly wishing the pesky wizard would stay out of your way.

As a single-player game, though, DeathSpank really shines. The addictive nature of leveling up and looting treasure chests and fallen enemies is here in spades, not to be missed by fans of the genre. It’s also one of the better-looking and most polished titles in the digital space, it’s also one of the meatiest — there’s easily hours worth of play time here, more than many retail titles, all for $14.99. So what are you waiting for? Arm your “Demon Poop Hammer,” there’s feces that need collecting.