When it was first announced that the Wii would be getting its own Dead Space title, fans of the original game immediately cried foul. It was fair to assume that like the console’s other big 360-to-Wii survival horror down-port Dead Rising: Chop Till You Drop, Dead Space Extraction would end up looking cheap and playing exactly like Resident Evil 4: Wii Edition.

Those initial guesses couldn’t have been more wrong. Dead Space Extraction looks great, nearly as good as its HD brother, and it plays nothing like RE4. Instead, it’s more like a cross between a standard co-op on-rails shooter and one big, long, interactive cut scene. Where the original Dead Space was light on story, Dead Space Extraction‘s story never stops. Every single second of the game is part of a greater narrative, like a sci-fi TV mini-series marathon that you can shoot at.

The question is, would we have been better off with a cheap, RE 4: Wii Edition-style port of the original game, or is this new shooter-story hybrid something superior?

Hit the jump for the answer. 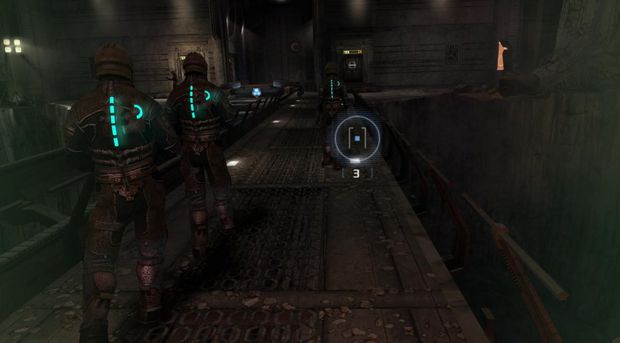 Man, so close! Dead Space Extraction is such a near-miss at becoming a new Wii classic that it actually hurts. If the game were just flat-out average, that would be one thing, but in a lot of ways, it’s one of the best games on the Wii. That said, Dead Space Extraction drops the ball enough times that I can’t recommend it as a full-price purchase to each and every Wii owner out there, regardless of how much I love dismembering mutant zombies.

The first thing you’ll notice about the game is the way it tells a story. Dead Space Extraction follows a varied group of characters as they experience a sci-fi disaster of epic proportions. From the initial point of panic to exhausted, half-dead acceptance, the game accurately depicts the process that humans go through in coming to grips with being completely fucked. Where the original Dead Space was a lonely, Alien-esque adventure into the lethal unknown, Dead Space Extraction shows a group-fear experience, à la Aliens or Dawn of the Dead. Special care is taken to keep the game’s events unpredictable and believable. The results are more psychologically unsettling than you might expect. Despite the fact that the game’s first chapter contains no more than fifteen enemies total, it still managed to give me that creepy, classic horror feeling like few other games ever have. 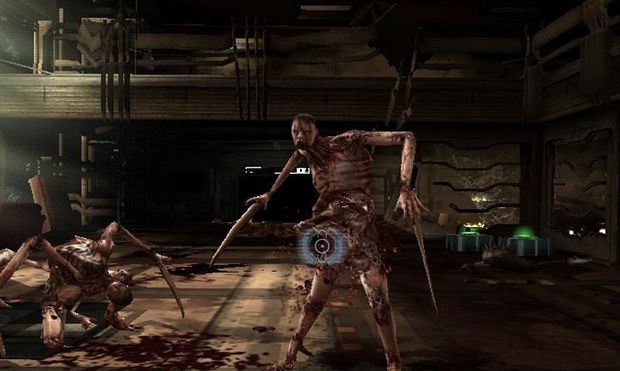 Part of that comes from the Cloverfield-esque way the game’s story is told. Getting a good, first-person look at the game’s well-rendered and well-acted characters as they look into your eyes, begging you for help seconds before they are slaughtered, does a lot to make you feel connected to the game’s world. It also doesn’t hurt that the game actually looks the way a Wii game should. When the specs for the console were first announced, gaming aficionados rightly assumed that most Wii games would look better than GameCube games, but worse than games on the 360. Of course, all Wii owners know by now that finding a Wii game that actually looks better than a GameCube title is a fairly rare thing, but Dead Space Extraction pulls it off. Environments are beautifully lit, enemies are well rendered, and the people emote with surprising believability. Even at its worst, the game never slips into totally PS2-looking territory, and like previously mentioned, it sometimes looks nearly as good as the original Dead Space (especially on an SDTV).

When it comes to sound design, Dead Space Extraction may actually surpass the original, which is no small feat. Other than a few inappropriate musical cues (the soundtrack sometimes lays it on a little too thick), the game’s score, voice work, and sound effects are pretty much perfect. Creative use of effects to make the player feel trapped, threatened, and even mentally ill go a long way to keep things unnerving. The way that everything muffles as you take part in combat while encased in a spacesuit; the pained, guttural death cries of slaughtered enemies; and the genuine expression of fear in voices of the game’s cast all go a long way toward impressing and affecting the player. 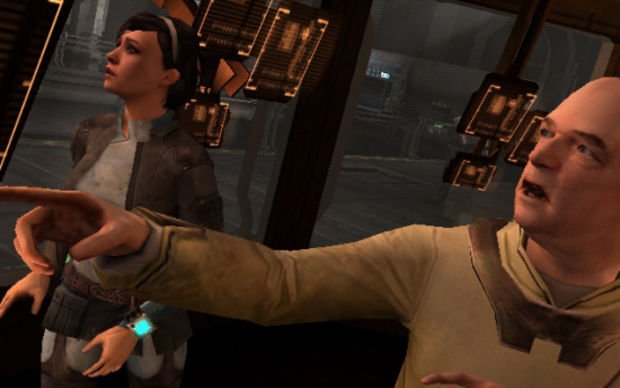 That “mentally ill” part is probably the thing that will truly make Dead Space Extraction a special treat for fans of the original. From the very start, the game works extra hard to show you first-hand what it’s like to be “infected” with a mysterious religious ailment that’s responsible for all the game’s horror. For true fans of the Dead Space franchise, seeing (and hearing) what it’s like to slip into pre-Necromorph madness is a must-have experience. Knowing that no matter how well you play, no matter how long you survive, you and every other character in the game could still go homicidal and/or suicidal at a drop of hat provides Dead Space Extraction with a continuous sense of dread that few games ever achieve. Necromorphs are scary and all, but it’s the stuff you see regular people do to each other (and themselves) in this game that will really get under your skin.

It’s too bad that after a while, the anything-goes, death-filled experience that the game initially offers gives way to continually more cliché and predictable events. After chapter five or six, it becomes pretty clear which characters are going to survive and which ones aren’t. I don’t want to give it all away, but anyone familiar with the Star Trek “red shirt” phenomenon will quickly learn to predict who they are about to see get decapitated, crushed, or otherwise mutilated. The worst cliché in the game shows up near the end, when it actually presents us with the old “creepy woman singing a nursery rhyme for no reason other than to try to be spooky” routine. Why the game’s developers started relying on such tired techniques, when the majority of game’s narrative elements are so strong, is totally beyond me. 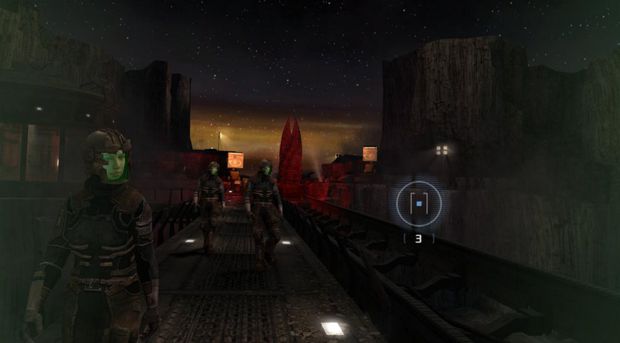 So far, I’ve spent most of this review talking about the game’s presentation and story. The reason for that is, presentation and story are all the game really tries for. Clearly, the developers of Dead Space Extraction were more interested in making an interactive Dead Space movie than they were in creating a videogame. As far as gameplay goes, there are a few high points. The drop-in/drop out two player co-op, the anti-gravity bits, the variety of kick-ass weapons, and the ability to use psychic powers to freeze enemies and throw stuff around are the first things that come to mind. Beyond that, though, the videogame parts of this videogame are relatively bland. A predictable rhythm of “camera moves forward, camera stops while you kill stuff, repeat” slowly sets in after the first few chapters, and does little to move the on-rails genre forward.

Things actually get more boring when it’s time to kill stuff. There are basically four types of enemies (humanoids, fliers, crawlers, and shooters), and the act of killing them all doesn’t change too much as the game progresses. A lot of my time playing Dead Space Extraction was spent waiting for the action to end, so I could get back to the “good parts,” namely, the story and set pieces. That may be a first for me; waiting for the playable parts to be over so I could get to the next cinema. 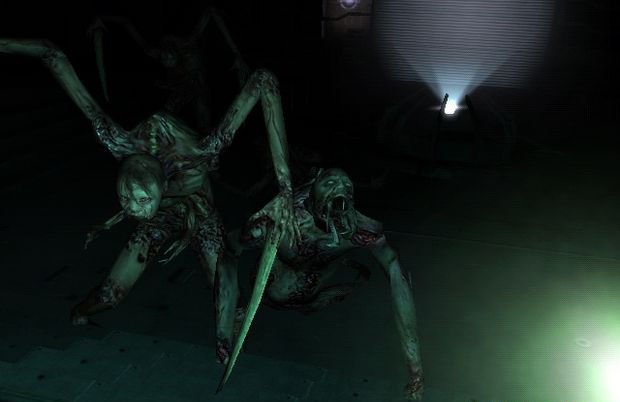 Also lacking in the “videogame” department of this videogame are the extremely under-ambitious bosses. There are only three of them in the entire game (plus a cameo from a special friend from the original Dead Space), and though they are all fairly cool and fun to fight, they are too forgettable and easy to take out. A little creative use of psychic powers and targeting of weak points (which are always yellow, in case you need help in finding them), and these bosses will be dead before you know it (or really want them to be). Instead of boss fights, a few of the game’s chapters require you to rivet a barricade to a wall, or solder some virtual wires, all while simultaneously fending off in-coming necromorphs. These moments are sort of like trying to play Operation (the wacky doctor’s game) and a shooter at the same time. What was clearly meant to be a creative new way to make things tense comes off as more irritating and cheap than anything else.

Adding insult to these various injuries is the game’s length. Dead Space Extraction is not quite as short as House of the Dead: Overkill, but not nearly as long Resident Evil: Umbrella Chronicles, which does a lot to keep it from overtaking RE:UC as the Wii’s best on-rails shooter. On the plus side, Dead Space Extraction does contain a solid array of extras, including an arcade-y challenge mode, four difficulty settings, and a bevy of collectibles. Keeping with the game’s general philosophy of “story over gameplay” Dead Space Extraction also contains six issues of Image’s Dead Space comic book, here presented with the added perks of digital distribution, including limited animation and full voice acting. As a big fan of Ben Templesmith, I actually enjoyed watching these comics come to life just as much as playing the main game.

There was a lot of pre-release hullabaloo about how Dead Space:Extraction is not an “on-rails shooter,” and instead should be classified as a “guided first-person adventure.” After completing the game, I was left feeling that the distinction between the two is pretty meaningless. Sure, Dead Space Extraction tells a good story, but at its heart, it’s still an on-rails shooter, warts and all. Fans of the genre, or of the Dead Space world in general, will definitely want to add this game to their permanent collection, but everybody else may want to go with a rental first. There are quite a few one-of-a-kind, disarming (HA!) horror moments to be found here, but not quite fifty dollars’ worth. If the game cost ten dollars less, or if it had a few more bosses/hours worth of content, it could have surpassed Resident Evil: Umbrella Chronicles as my favorite on-rails shooter on the Wii. As it stands, it takes the silver medal in that contest, and a score of…