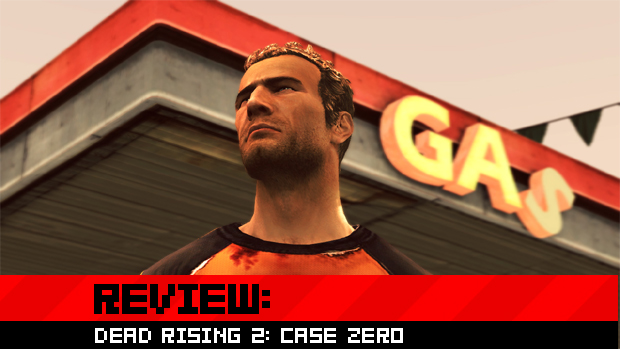 Zombies, psychopaths, and questionable parenting skills all came to Xbox Live Arcade this week in the form of Dead Rising 2: Case Zero. It’s a new main character, a new story, new survivors and the same old zombies all in a neat, focused package.

Read on for our review.

In Dead Rising: Case Zero, we’re given the first opportunity to play new series protagonist Chuck Greene. Case Zero doesn’t reveal new details about the character or really any details at all. The introductory cutscene sets up the scenario wherein Chuck’s truck is stolen with his infected daughter’s anti-zombie medication still inside and only twelve hours to go until her next required dose. That’s all. Hell, the only way you would know that Chuck was a famous motocross racer without foreknowledge is through a comment made by a survivor more than halfway through the game.

The only things we have to go on then are that Chuck is a man with a daughter that he loves enough to brave hordes of the undead to keep her alive. That’s enough. Cutscene interactions between Chuck and his daughter Katey are equal parts touching and cruel. Katey is convincing as a child, unaware and unable to understand what has happened to her world, serving her role well as the game’s main objective. Chuck is believable as well, if a bit melodramatic, and an easy character to get behind as a player.

Beyond the initial situation there is very little resembling plot development in Case Zero, which is easy to understand considering its brief running time of about two hours (including cutscenes; there is, at the absolute most, an hour and twenty minutes of actual gameplay in a playthrough). The game is still effective at telling its story of a man and the lengths he’s willing to go to for his daughter, there just isn’t much story to tell.

That doesn’t prevent there from being a lot of cutscenes, however. The game seems utterly riddled with them and loading times both going into and out of cinematics feel a bit on the long side. This is fine for the first playthrough. But, by the third time you start over and have to skip through three cutscenes before being able to kill a zombie, it becomes annoying.

That’s what Dead Rising is all about, after all: killing zombies. Case Zero offers in the neighborhood of forty different items that you can use to defend yourself against the undead masses. Some items are only good for killing on their own, while others, indicated by a blue wrench icon, can be combined at workbenches to produce deadlier weapons or more potent items. Case Zero has nine of these combo items to build.

The combo items are the only practical way to earn experience points. Simply killing zombies won’t reward you with points. Significant quantities of points are only accrued through rescuing survivors and killing zombies in creative ways. Not that earning experience matters all that much in the context of Case Zero. You can progress Chuck through five levels of experience but there’s nary any value in it. You’ll only earn an additional inventory slot and a defensive move used when grabbed by zombies so there is not a whole lot of incentive to do so.

Chuck and the zombies aren’t alone in Still Creek, either. Some humans are holed up and in need of rescuing. Only one specific survivor needs to be rescued in order to complete the game, though you will have to interact with others to achieve Chuck’s goals. A central survivor is Bob, who appears on a rooftop near the center of town after a short time of playing. Bob’s vantage point allows him to see people moving through the town and he’ll flag down Chuck if he has information on the location of new survivors. Thankfully, he has neither a radio nor an over-developed sense of helpfulness with which to annoy you.

Getting this information is essentially the same as receiving a quest, complete with an objective and a guide arrow to lead you to it. These missions are timed and their timers start whether or not you ever receive the quest. Because of the small size of Still Creek and the limited number of things to do in the short game, it is at no point a problem to rescue everybody. In fact, it’s easy to wind up with hours to spare for mindlessly killing zombies while waiting for Katey to be ready to take her next dose of Zombrex.

If you played Dead Rising, you can probably recall a moment at which you honestly wished the survivors would just get themselves killed before you got to them. The AI used for survivors was utterly wretched and treks across Willamette Mall became exercises in torture and babysitting. Things are much, much better in Case Zero. In playing through the game half a dozen times, in only three instances did I have to go and free a survivor from a zombie’s grip and, when told to go to a specific point, living people actually follow the instruction and don’t foolishly try to kill things along the way.

Pyschopaths, however, have not changed one bit. These survivors were one of the most frustrating parts of the first Dead Rising game, as there was really no difference between killing a psycho and killing a zombie except that the psychos are faster, usually have ranged weapons and apparently have a greater resistance to pain than something which cannot feel pain. They were annoying before and that hasn’t changed, as evidenced by the sole psychopath encounter in Case Zero. There is no joy in fighting the game’s boss whatsoever, just frustration, annoyance and misery.

I’ve tried to avoid referring to Dead Rising 2: Case Zero as a demo in this review. I don’t judge it as such. It’s a nice little slice of Dead Rising which stands perfectly fine on its own and I can honestly recommend it to people who want to kill zombies for a few hours but would not otherwise enjoy the time-based mechanics and rigid scheduling necessary to complete a longer Dead Rising title. And for those who are already planning to purchase, it’s an inexpensive and inoffensive way to slate your hunger for zombie decimation while offering something extra (though not much) to take with you when Dead Rising 2 comes out.