It started life as an unknown game from an untested studio, but as we drew closer and closer to Darksiders‘ release date, people started to take notice. The incredible art design, the promise of an “M-rated Zelda” and the significant badass factor of stepping into the shoes of War himself slowly but surely drew attention, and now it’s safe to say that Darksiders has become a top-tier title in its own right.

As the debut game of fledgling studio Vigil, a lot is at stake and a mark has to be made, so it’s interesting to note just how much Darksiders pilfers from other games. Not just borrows, but outright steals. There is certainly some Zelda, and more than a little Devil May Cry, Prince of Persia, and Onimusha to boot. There is even a huge dose of Portal in there.

Darksiders is shameless in its robbery, but it doesn’t matter. It doesn’t matter because, original or not, Darksiders is still one of the most awesome action adventure games seen this generation. Read on to find out why innovation isn’t everything, and why a little shamelessness can go a long way. 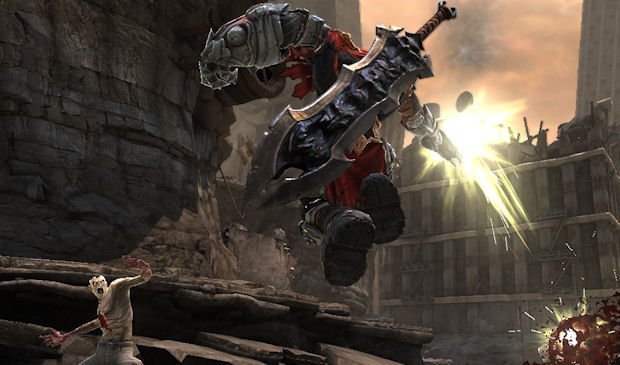 Let’s get one thing absolutely clear. Darksiders is not an M-rated Legend of Zelda. It may borrow heavily from the iconic Nintendo title, going so far as to pinch map designs, items such as the boomerang and hookshot, horseback sections, and even the famous “heart” health system, but if you go into Darksiders looking for a more brutal Zelda experience, you’ll be let down.

There is no overworld. There are no towns full of NPCs who will charm you with their silly dialogue. There is not a wealth of sub-quests and optional missions. Basically, Darksiders takes many of the tools of Zelda, but none of its inimitable character. Fortunately, however, this has been replaced with a tight and incredibly empowering combat system, fantastic visuals that punch you in the face, and some of the biggest, baddest boss battles yet seen in a game.

Players take on the role of War, one of the Four Horsemen of the Apocalypse. The story goes that Heaven and Hell agreed not to wage war until the third kingdom, that of mankind, was strong enough to hold its own against the other two powers. However, due to an administrative error and more than a little betrayal, Armageddon was triggered and War manages to get the blame for killing off the human race. He must now clear his name before the Charred Council and find the one responsible for kick-starting the apocalypse, tethered to a snarky spirit that watches his every move and holds back his powers. 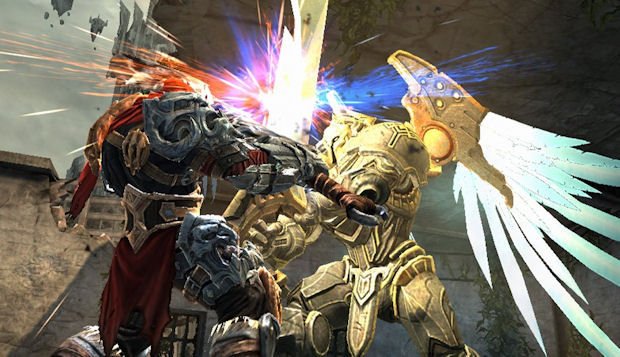 Darksiders doesn’t let the inanity of its story get in the way of the epicness, and while the narrative is fairly silly, it’s carried with self-assurance and enthusiasm, ensuring that it remains interesting throughout. This is helped by a terrific cast of characters such as the sinister demon Samael, the sycophantic merchant Vulgrim, and War’s unhelpful ally The Watcher, expertly voiced by Mark Hamill. War himself lacks much personality, but it actually helps his character. He is a stoic, smoldering, humorless creature who sounds like he is constantly suppressing his own rage (or a need to go to the toilet). He is pretty much what you’d expect War to be.

Darksiders is a classic action-adventure game through and through. Heavy, meaty combat mixed with exploration and dungeon-based puzzles are all on the menu, and are all consistently enjoyable. Darksiders latches onto the same addictive acquisition-of-power gameplay that titles such as Metroid and later Castlevania games have mastered — the idea of gaining a new ability, and then returning to older areas to enter places previously unreachable. It’s simply great fun to finally scale that impassable chasm with a brand new tool, and Vigil has tapped into that fun splendidly. The only sore point is that there’s not enough exploration, as sometimes the uses of new tools feel rather limited. 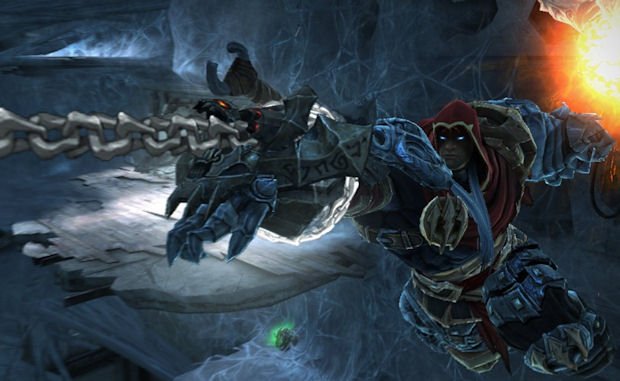 Character customization and RPG elements take a back seat, but they are present. War earns souls from enemies and broken objects that he can trade with Vulgrim for more weapons, new attacks, and all manner of items. Gear can be attached to weaponry, bestowing extra attributes like fire elemental damage or increased power from thrown objects. War can also discover chests hidden around the world to increase his overall health or “Wrath” meter.

The game is split evenly between environmental puzzles and combat. The puzzles are nearly always quite simple, and those looking for a brain challenge will be disappointed. At least until the Black Throne, which is pretty much Darksiders’ “Water Temple” — the obligatory dungeon that is needlessly complicated and, to be honest, not all that fun to suffer through. Still, the various abilities that War acquires — from the hookshot-like Abyssal Chain to the Portal Gun-inspired Voidwalker — are used quite well by Vigil in a variety of interesting and clever ways.

The combat is a far more savory prospect. It starts off as little more than a button masher, but the simple combos and War’s ability to switch between his sword and his sub-weapons on the fly soon make for a system that can be as shallow or deep as you like. There is potential to drag enemies toward you with the Abyssal Chain, uppercut them with the sword, then slice them with your scythe, if that’s how you want to play. If you prefer to fight from a distance with the Mercy pistol or fling cars at your enemies, you can do that as well. Alternatively, if you’re up for some simple hack-n’-slash, then just mash the attack button until everything’s dead.

War also has access to various Wrath abilities. These are special moves bought from Vulgrim that require yellow souls to use. The powers include Blade Geyser, which summons a circle of swords out of the ground to attack whole groups, or Stoneskin, which raises War’s defense and attack stats. There is also a Chaos Form, which is powered up with successful attacks and transforms War into a giant molten demon of destruction. As to be expected. 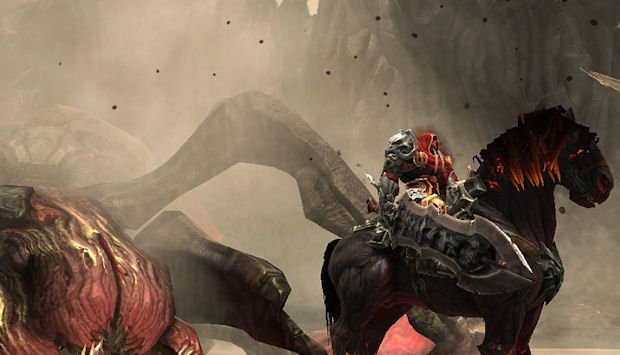 The combat system feels heavy, which suits War’s huge and lumbering build perfectly. It’s not meant to be pretty; it’s meant to be visceral and brutal and very, very beefy. It works in Vigil’s favor, and players should have no trouble feeling like War incarnate when they take control. The combos are never complicated, focusing more on timing than anything else, keeping things accessible but never too easy. If Vigil makes one thing stands out on its own, it’s the very solid swashbuckling.

That said, there are a few issues that need to be addressed, the most pressing being the prevalence of enemies with unblockable attacks that they refuse to telegraph. War’s ability to block and counter enemy assaults is almost completely useless due to the amount of enemy attacks that cannot be blocked. War also has a short-range dash move with which to dodge attacks, but it rarely ever gets him far enough away from the intended blow, and even when it does, War is slow to recover and return to the fight in time to launch an attack, at least until you unlock certain moves. In general combat this can be annoying, but for a few of the bosses, it can be a real pain. Eventually, players will learn not to look for a telegraph, but instead rely on their instinct to second-guess enemies. It doesn’t always work, either. 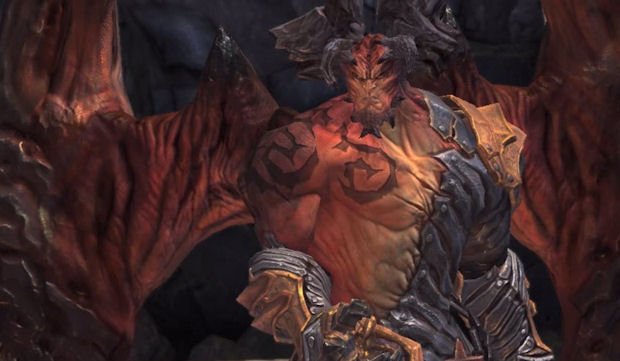 It also has to be said that the amount of debris in the game is troublesome. War can both grab enemies for finishing moves and various environmental weapons with the same button. This inevitably leads to War picking up a chair or a car instead of finishing an enemy, leaving him prone to some free attacks. A bit less clutter in some of the game’s indoor areas would have been welcome.

That small issue aside, the combat is very, very fun. Of special note are the boss battles, which rarely feel conventional and nearly always provide a thrilling, climactic finale to each dungeon. Whether you’re using portals to jump on a giant demon’s back or riding on the back of your horse while shooting a pursuing giant worm in the mouth, the game is full of memorable fights.

Darksiders also looks damn good. While the graphics are not going to threaten anything like Uncharted 2, the art style is thoroughly gorgeous and stands alone as the one thing that Darksiders can truly claim is its own. Joe Madureira’s bold character designs really stand out. Everything, be they gun-wielding angels or horned, slavering demons, look incredibly cool and striking. I also love how the post-apocalyptic world has been created. Darksiders‘ environments look like typical fantasy settings, but the occasional ruined freeway and shattered building remind you that it’s meant to be a humanity-stricken Earth. It’s a shame that the game suffers from a number of bugs, screen-tearing among them, that threaten to take away from such a fine-looking title. 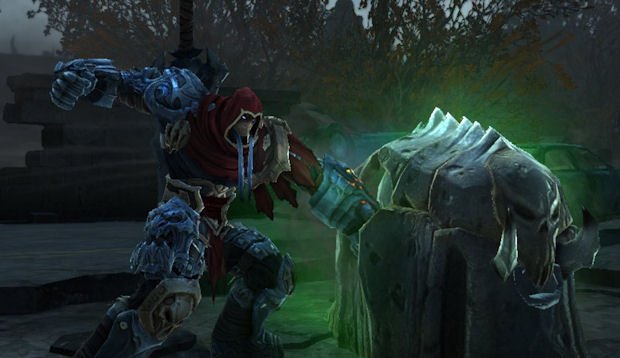 The game industry is unique in that wholesale copying of other creations doesn’t matter so long as the developer uses what it stole well, and Vigil uses its apprehended gameplay mechanics like true masters. It doesn’t hurt that Darksiders chose to tread well-worn paths, because it treads so confidently and so charmingly that fun is guaranteed, whether you notice the similarities to other games or not. The experience is not perfect, with some ill-advised puzzles toward the latter chapters, an ineffective block system, and the occasional glitching, but nothing ever takes away from the fun and action-packed experience that is Darksiders.

Darksiders is one of the best action-adventure games of the current generation. Everything in it, you’ve played before, but never has such a collection of game mechanics been stitched together so well, not to mention feel like part of a coherent game world. Everything that is in Darksiders feels like it belongs there, and makes sense. Altogether, fans of action games owe it to themselves to check out this memorable, lovingly crafted, and simply fun title. Vigil is going to achieve great things if this debut is to become its standard.