Darkest of Days is the worst first-person shooter of this generation.

There it is. This attempt to be a clever, interesting FPS experience is, without a shadow of a doubt, the single worst first-person shooter to appear in the past five years. It is a game for which hyperbole is perfectly acceptable. A game so awful that simply writing about it cannot do it justice. The game isn’t simply bad; it’s the lowest of the low, a game so bad that its very existence defies all sense of reason and logic.

So, what did we think of it? You won’t know until you read our review! 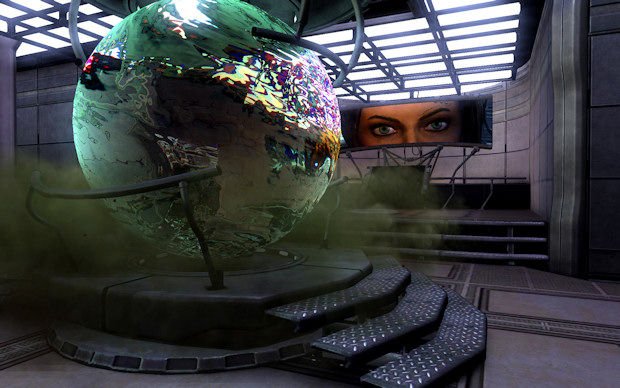 You know how you can tell if a game is bad? Look at the Achievements list. If you see a full retail game with thirteen Achievements worth several hundred points apiece, you can get a good idea of just how little the developers cared when they made the thing. Darkest of Days is the perfect example. Right down to its very Achievements, the game sucks.

The premise had potential, but it’s clumsily implemented and written by people who lack the required skill to make it work. You start the game as one of General Custer’s soldiers who is due to die at the battle of Little Big Horn, but just before you meet your doom, you are whisked away by time travelers. Within five minutes, you are drafted into a Quantum Leap-style organization that is fixing historical mistakes, and even though you should be completely freaking out and struggling to cope with the crazy technological magic that’s happening, you accept this role without question and are suddenly hopping through time, using weapons you’ve never seen before, let alone trained with, and dealing with history that, from your perspective, hasn’t even happened yet.

I can suspend disbelief for my videogames. I’ve played Metal Gear Solid games and can accept some of the most ridiculous plots out there. However, do not tell me that a Civil War fighter can go from nearly dying during his own time to shooting shit up in World War I after being transported to the future within the hour, and be perfectly okay with that. It’s not exactly refined of me to say it, but this game is stupid. Straight-up stupid. 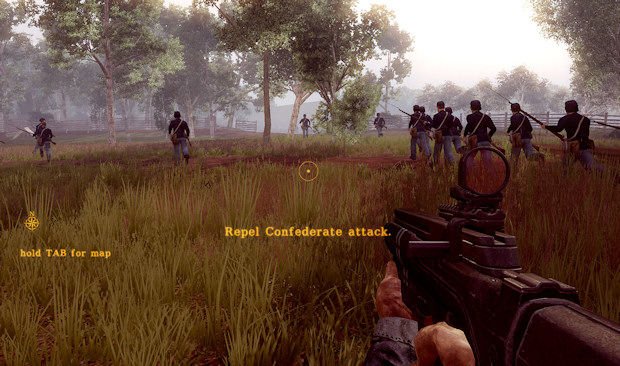 Despite how bad it is, the plot is pretty much all this game has going for it, complete with its embarrassingly inane dialog and sub-par voice actors. As bad as the story is, the gameplay is far, far worse. This is the kind of FPS action I’d barely find acceptable on an N64 or PlayStation, let alone the Xbox 360.

Most of the game is spent walking. That’s what you do. You walk from one place to another. Sometimes you can get through a chapter without needing to fire more than a clip of bullets. Often there are periods of walking that last so long that there are checkpoints between two empty distances, where all you’ve done is walk. Mid-walk checkpoints. Seriously. The walking sections aren’t helped either by the ludicrous amount of illogical invisible walls and equally invisible “mission areas” that cause a ‘game over’ should you step behind an unseen line of death.

Compared to the shooting, however, the monotonous walking is a blessed relief. Combat is horrible, and that’s putting it kindly. The developers thought they’d be clever by putting period weaponry into the game, without caring about the fact that period weaponry sucks, and it’s not fun to play with a single-shot musket that takes forever to reload. Sure, it’s historically accurate, but it’s not enjoyable in the least, which is why you don’t get Civil War shooters in the first place. Weapons are hard to aim, with obscuring sights attached to most of them, sporting a sluggish rate of fire and a small ammo clip. As the levels progress, you will get access to a few more “futuristic” weapons, but they are barely much better, with not one firearm standing out from the general shooter weapons you can get in any FPS. You can also upgrade the weaponry with a slapdash and rudimentary upgrade system, but you’ll barely notice the difference. 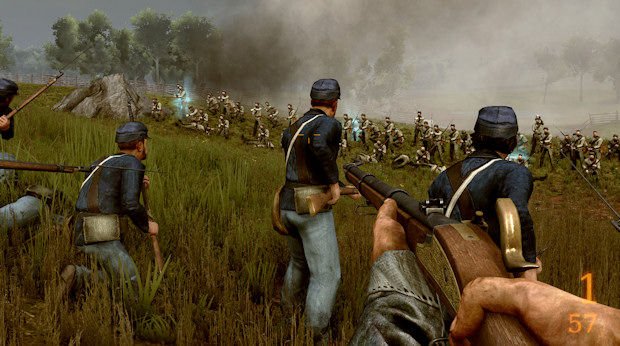 The frustrating shooting is compounded by the fact that it’s nearly impossible to distinguish allies from enemies, thanks in no small part to the muddy graphics and the fact that most of the game is daubed in a grotesque shade of brown. What’s more, both allies and enemies alike will run around the battlefields like headless chickens, possessing no rhyme or reason in their random actions and contributing to the clusterfuck that is every single level of this piss-poor excuse for a videogame.

Of course, it wouldn’t be a bad FPS without graphical glitches, and there are plenty of those. From character models that stutter and freeze, to players sticking to scenery, to horrendous framerate issues that flare up whenever the game tries to do anything even partway epic, Darkest of Days is packed full of every technical failure under the Sun, making this game the complete package of feckless garbage.

Every now and then, the game tries to be interesting by throwing enemies at you that are surrounded by a blue haze. The blue haze indicates historically important characters who must be kept alive. You can incapacitate them by shooting their legs or throwing stun grenades at them, but if you shoot them, you get less upgrade points between levels. While in theory it’s an interesting idea, their inconvenient placement and the messy chaos of battle means that they’re little more than frequent annoyances who are often best ignored. 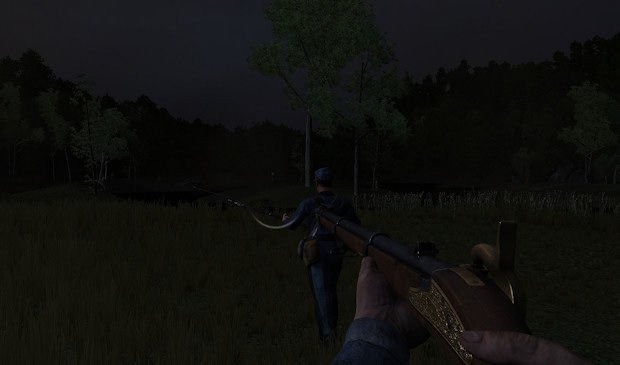 The more I suffered through Darkest of Days, the more a test of mental stamina it became. I have not been this angry, confused and downright disgusted by a videogame in a long time. I am an atheist, but I was praying to gods that I didn’t even believe in for sanctuary from this torture. Every level I beat I hoped would be the last, but as soon as I ended one stage, two would pop up in its place. Darkest of Days is like a Hydra in that regard. A Hydra made out of shit.

Not once, during the entire course of the game, is the experience ever fun. Not once. The game only threatens to be perhaps marginally interesting one time and one time only, during the World War II level where you are being marched through a Nazi POW camp. However, the frequent slowdown and glitching animations throughout the scene effectively eliminate any sense of atmosphere that could have been built, and things are soon back to normal with the game being excruciatingly awful within two minutes.

I simply don’t know how games this bad get made. Did anybody test it? Did anybody care? Did anybody stop to think about how much fun it is to be shot at by brown enemies hiding in brown grass that can’t be seen through the scope of your brown gun? Did nobody question how anybody was supposed to enjoy firing a single-shot musket at endless swathes of cloned enemies who had plenty of cover while the player is forced into the open? Did anybody not think to let the player absorb more than a few shots before falling down dead? Did anybody not wonder if the lack of halfway decent anti-aliasing might hurt people’s eyes? 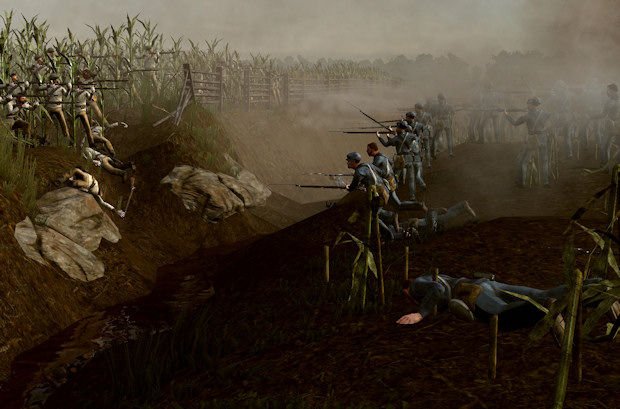 There is no excuse for this game. While the lack of budget is highly obvious, the lack of intelligence and design skill has no justification. A low budget cannot explain a game that is mostly walking from one point to another, interspersed with the worst FPS combat yet seen on a high-definition machine, with weapons that should never, ever be included in a videogame. Darkest of Days is unacceptable.

Please do not play this. It is not just bad, it’s painful. Sometimes a bad game is worth playing just to see how horrid it is, but I do not advise you try such an experiment with Darkest of Days. It is capable of ruining an entire evening, and I am actually ashamed that I now have an Achievement on my Xbox Live profile that reads, “Completed Darkest of Days.” That is a stain against my name that shall be carried to the grave. I have nothing but a disgusted, spiteful contempt for this affront to the first-person shooter genre and this embarrassment to gaming.

Darkest of Days is the worst first-person shooter of this generation.

Score: 1.0 — Epic Fail (1s are the lowest of the low. There is no potential, no skill, no depth and no talent. These games have nothing to offer the world, and will die lonely and forgotten.)