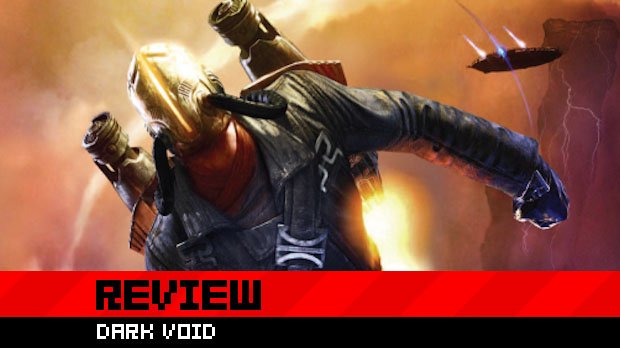 Dark Void gives players a jet pack and tells them to live out their Boba Fett fantasies. With an aesthetic and gimmick that drips in Rocketeer influences, Dark Void‘s mixture of standard third-person shooting and jet-based dogfighting certainly has potential to be a success. However, having finally gotten the game into my hands, the reason for Dark Void‘s lack of hype has been made all too clear.

It’s really not all that good. 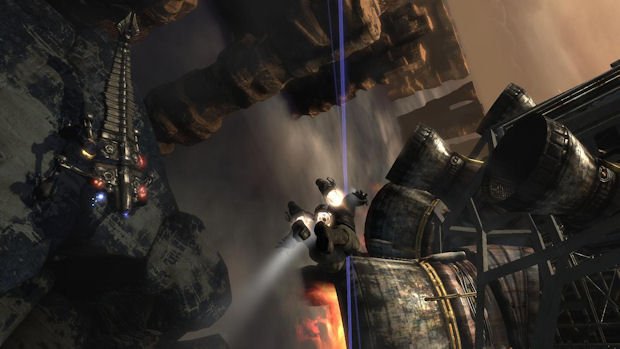 Dark Void places players in the shoes of William Augustus Grey, voiced of course by Nolan North, who is the voice of every videogame hero ever devised. After crashing his plane in the Bermuda Triangle, Will finds himself in a parallel dimension where he learns that Earth is secretly being controlled by a malevolent alien race called The Watchers. In the “Void,” the Watchers pose as Gods, while their operatives on Earth take human form and guide the world’s affairs. Naturally, Will must strap on a jet pack and shoot every Watcher he sees.

The plot for Dark Void is an interesting premise, but nothing’s ever really fleshed out. Dark Void‘s universe, despite its potential, feels rather underdeveloped and shallow, with nothing to draw players in and inspire them to find out more about the setting and its characters. Will is a decent main character, but that’s only because he is basically Nathan Drake from the Uncharted series, something that all Nolan North characters are going to be.

The story could be forgiven if the action was up to scratch, but unfortunately it’s no better than the thin-on-the-ground narrative. The game starts with what is possibly the worst introduction I’ve ever had to suffer through, as players are thrown right into a jet pack dogfight, surrounded by more visual information than they could ever desire. As you may have already feared, the controls for the flight sections are absolutely horrible. The game tries to give you 360 degrees of airspace to play in, but it just becomes a confusingly chaotic mess as you desperately try to keep track of the many targets flying around at top speed.

It’s hard to see where you’re going and what you’re shooting at, and the so-called “lock-on” control doesn’t actually lock you on. It simply shows you where the nearest enemy is and expects you to manually maneuver into position to shoot it, by which time the enemy has flown far away. It’s not uncommon to spend the majority of a flight mission watching targets constantly disappear behind mountains or whiz straight past you the very second you get them in your sights. It’s an exercise in pure frustration. 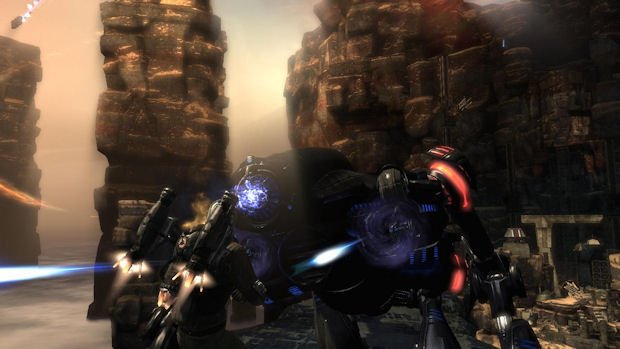 It also doesn’t help that the camera controls for these sections are relegated to the D-Pad, as the right stick is used for “aerial maneuvers” that consist of a barrel roll and a 180 degree turn. These much-lauded acrobatics do very little to help the game, and often just confuse the camera even more, not to mention completely skew the player’s sense of direction. A lot of these sections will be spent simply trying to work out where the hell you are in relation to everything else going on around you, and considering how fast and erratically things move, you’ll not succeed very well.

The dogfights do have a rather cool mechanic where Will can hijack enemy aircraft in mid-air. If you get close enough to an enemy ship, you can grab hold of it and start ripping a control panel out of its hull, taking care to jump from side to side to avoid the ship’s gun. Once the panel’s been ripped, the pilot hatch opens and Will tackles the Watcher pilot, killing it and taking control. While this is fun, it gets incredibly repetitive incredibly quickly, as players do the exact same thing over and over again in order to keep jacking ships.

The game is split between these dogfights and a more traditional third-person cover-based shooter. While the traditional gameplay is better, one could call it merely serviceable at best. Everything works well enough, but with rather loose controls and boring shooting mechanics that we’ve seen in dozens of games before, there really isn’t anything worth buying the game for. When you’ve played things like Uncharted, Gears of War, or even Army of Two, there is no need for a shooter that does the bare minimum in order to be playable and nothing in order to be compelling.

It’s hard to describe the combat in Dark Void simply because it’s hard to describe anything that everybody already understands and knows. What can you say, really? There is cover. Players hide behind cover. Enemies hide behind cover. Shooting happens. With bog standard enemy AI and no unique mechanics or systems to talk about, there is nothing you need to know in a game that is unable to do something that stands out. 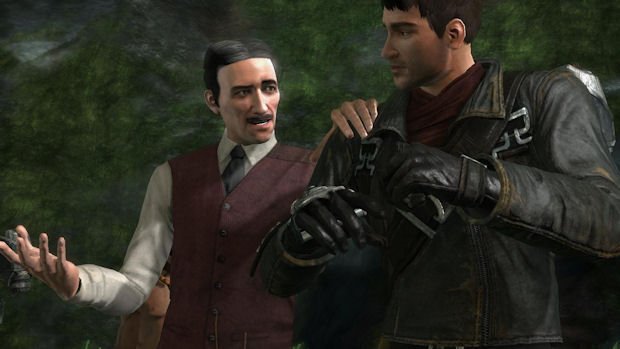 It’s not for the want of trying, however. Dark Void‘s big trick is the “vertical cover” system, which works exactly like a regular cover system, but with more restrictions. Using Will’s jet pack, players can zoom up to ledges and hide underneath them, peering up towards enemies that are shooting down at him and using the flat surface of the ledge for protection. Players then methodically fly from ledge to ledge, shooting at Watchers who are doing the same thing. It’s about as forced and gimmicky and convoluted as it sounds. It’s also cumbersome, it gives players less room to move around, and once you’ve played one section like this, you’ve played them all.

Downed enemies and hidden items yield Tech Points that can be spent on gun upgrades. Again, nothing is new or exciting here, simply giving players the option to increase damage or ammo capacity. Things we’ve all down a thousand times before in videogames. The weapons themselves are all rather standard. Machine guns, sniper rifles, rocket launchers. You know the drill.

Once you’ve experienced the traditional shooting, the vertical cover, and the flight sections, you’ve basically “enjoyed” all that Dark Void has to offer. The game repeats itself from beginning to end, which wouldn’t be so bad if the stuff it repeated was actually cool or even worked properly. Instead, Dark Void just piles boredom and frustration atop more boredom and frustration. The things Dark Void does that are unique feel broken or forced, and the things Dark Void does that aren’t unique have been done better by nearly every other game that does them. 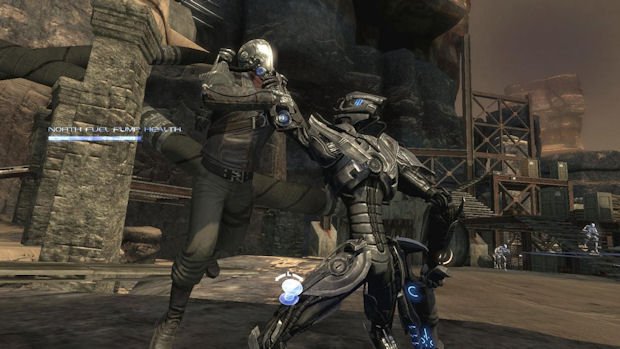 The best parts of the game are mediocre and the worst parts are abysmal. Perhaps if the flight sections had been taken out altogether, the game might be at least worth a rental, but the uninspired and unchanging shooter gameplay is unforgivable when the alternative offered is so horrendous and irritating. About the only thing I really like about the game is the enemy design, but even that feels appropriated from elsewhere. The Watchers look like Star Wars Droids, more or less, and when that’s the most outstanding part of the game, something went pretty damn wrong.

Dark Void is not a good game. Dreary and annoying in equal parts, this is a game best left avoided. Better games have already been released this year, and it’s not even February yet. Dark Void will be forgotten in two weeks, and you’d be better off having not played it before then.