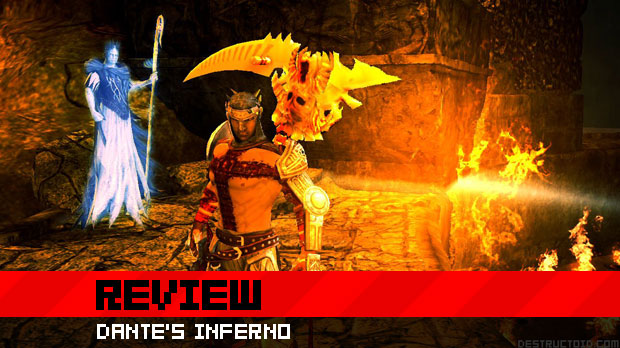 Strip away marketing and PR controversy, and forget for a moment that Dante’s Inferno is a videogame interpretation of a literary classic (albeit loosely).

Sure, Visceral Games — the talented team behind the critically acclaimed Dead Space — has taken a bit of flak for its attempts to turn Dante Alighieri’s The Divine Comedy into what could most easily be described as a “big-budget third-person action videogame.”

But I think some people had forgotten that Visceral knows how to make fun, technically impressive games; Dante’s Inferno is no exception. Despite what could be consider some “me too” gameplay, Visceral delivers one of the most surprisingly solid games I’ve played in quite some time.

First, let’s deal with that elephant in the room — Dante’s Inferno borrows heavily from from predecessors like God of War, and similar games in the genre. There’s simply no getting around it, and even bothering to try is foolish. But if you’re going to wear your influences on your sleeve, you need to show and prove yourself… do it well, or do it better. In that respect, Dante’s Inferno impresses, with solid third-person action that certainly feels familiar, yet throws in enough of its own tricks to make the action feel fresh and fun from start to finish.

You’ll use standard “light” and “heavy” attacks to wield Dante’s scythe, a massive blade yanked from the bony hands of Death himself. The size of this weapon is evident in the gameplay — it feels substantial with each blow you land, the weight of the weapon felt in every sweeping swing and combo. The combat is solid, unyielding, and deliberate. Compared to a recent title like Bayonetta, where the combat is fast and frantic (almost to the point of confusion), there’s never a feeling of losing control when Dante’s in combat.

Dante also wields a Holy Cross, a ranged attack that can be used alongside his scythe. While the Cross can be used on its own to stave off enemies or clip the wings of flying enemies, it truly shines when used alongside Dante’s scythe. Toss an enemy into the air and blast them with the light of the Holy Cross to keep them there. Or hop into the air and continue punishing them with your scythe before slamming them into the ground with the Holy Cross. Groundbreaking combat gameplay? Not really. But when it feels this tight, and this responsive, the “this is just like another great game” argument doesn’t hold much water.

It’s a great thing the combat feels so good, because you’ll be doing a lot of it. Yes, there’s minor platforming. Sure, there are some puzzles Dante will have to work through as he makes his way down and through the circles of hell. But the focus here is most definitely on combat — it’s obvious that Visceral made this an early priority, and it shows. To keep things fresh, the game throws in upgrades via a skill tree, split into two paths — Holy and Unholy. Progression is based on gameplay choices the player makes — punish enemies and unlock upgrades in the unholy path; absolve them to continue on a holy path. Relics can also be equipped to augment Dante’s abilities even further, which keeps the skill set feeling fresh up until the game’s end.

Visually, Dante’s Inferno is stunning, both from a technical and artistic standpoint. Visceral’s vision of hell — based on Alighieri’s text as well as a broad range of artists’ interpretations (including its own) — is as impressive as it is morbid and twisted. As you move your way through the circles — from Limbo to Treachery — the distinctions are clear, in both enemy design as well as the environments, many of which feel alive: contorted bodies and moving are part of the terrain, and you can hear their screams and howls echoing in the air. When you think it can’t get more f*cked up (the souls of aborted babies attack with you their razor blade arms), it does. As you dive deeper into hell, you’re in for a real treat, as the level design becomes more jaw-droppingly morbid and perverse as you plunge towards the final Circle of Hell.

If it sounds like I’m giving Dante’s Inferno a tongue bath, it’s because…well… I am. As a fan of third-person action, I knew I’d enjoy the game, but was caught off-guard at the game’s overall quality and polish. Still, it’s not without its issues, yet it should be noted upfront that they don’t really dampen the overall experience when all is said and done.

The trip through hell, for some, could be considered on the short side. During my first playthrough, I blew through the game in a little under eight hours. It also should be mentioned that the game’s play time is extended by an arbitrary set of arena-like challenges tossed at you towards the game’s conclusion. It did feel a bit odd that all of a sudden I was being tasked with killing X number of enemies in Y seconds, which seemed more like it should have been a separate game mode than shoehorned into the game’s narrative. (Of note, it sort of will be — the game’s disc reveals a cooperative multiplayer challenge room design mode, “The Trials of St. Lucia,” which will be made available as DLC in April.)

Who knows whether or not Visceral was truly sincere in wanting to, in some way, introduce gamers to Alighieri’s classic work? It’s clear it’s done its homework, even channeling more obscure trivia and facts from the real-life Dante Alighieri to flesh out some of the game’s narrative and characters. And it certainly does a commendable job of structuring a dramatic, more briskly-paced action-style narrative from the bones of the original piece, told through some of the most breathtaking pre-rendered cinematics seen in gaming.

When it comes down to it, you’re going to get the best Dante’s Inferno experience when you let go. Let go of the comparisons. Let go of your contempt for what it may or may not do for and to the source material. Just let go and have fun.

You’re not going to find a wholly original gameplay experience with Dante’s Inferno, but that doesn’t mean it’s not a hell of an entertaining package — it’s one that fans of action shouldn’t miss.