What do you get if you marry Gears of War shooting action and Prince of Persia acrobatics, wrapping the whole creation up in a post-apocalyptic steampunk aesthetic? You should get something absolutely awesome. In the grim and bitter realm of reality, however, you instead get Damnation.

I want to call Damnation ludicrious, because parts of it certainly are. However, I fear that in doing so, I’d lend the game far more credibility and notoriety than it actually deserves. It is far too mediocre to be called anything as interesting as “ludicrous,” and you can read our Destructoid review to find out just how dire this game truly is. 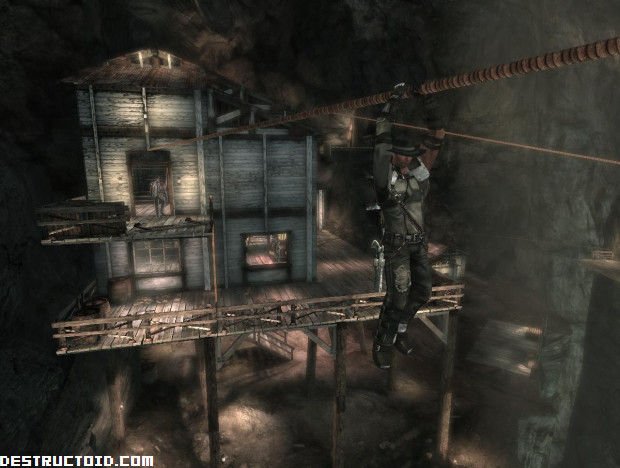 Damnation‘s story is barely there, yet they still try and force what scraps of plot exists down your throat. It takes place after a war, with an evil tyrant called Prescott founding a state known as “New America.” Prescott uses a special serum to control his subjects, turning them into his slaves, and it’s up to a man in a cowboy hat that never falls off to bring New America down.

Despite the ridiculous premise and stupid dialog, Damnation takes itself incredibly seriously and remains po-faced throughout the whole ordeal. However, the game deserves a little credit for being full of unintentional humor. The cutscenes are beyond banal, and the big “twist” near the end (shortly before I simply gave up on the thing) is so thoroughly, deliciously awful that it could be a meme. Unfortunately it will never become one, due to the fact that barely anybody will ever play that far into the game. I have no idea how anybody could write Damnation‘s script and think it is good. 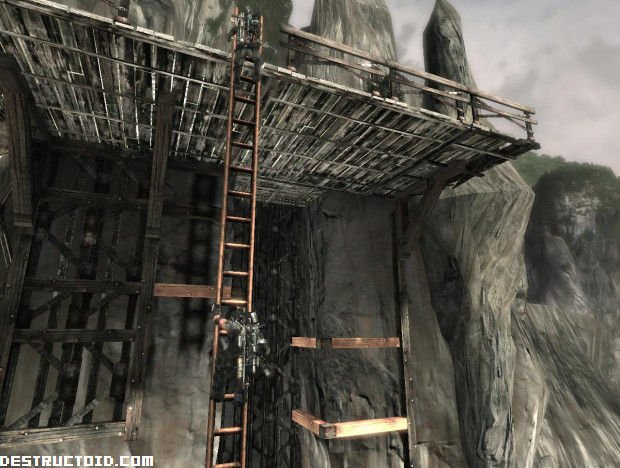 There is no room for a laugh, intentional or otherwise, in the gameplay itself, however. A third person shooter with controls so loose and jerky that you could almost believe you were playing a PS2 game, Damnation is an incredibly mediocre experience from start to finish. The game tries to be Gears of War, except it doesn’t have a cover mechanic, and you spend the entire game engaging in run and gun firefights with generic soldiers who have some of the worst AI I’ve ever seen.

If the gunplay is bad, the acrobatics are simply boring. Taking all its cues from Prince of Persia, only leaving out the beautiful environments, thrilling daredevil stunts and tight controls, Damnation‘s idea of vertical navigation is slow, lengthy and incredibly tiresome. Also, despite what the game would try and have you believe, the combat and the environmental puzzling never actually merge. The game is distinctly split between gunfights and acrobatics, despite the potential for the two things to combine and make a game that might have actually been interesting. 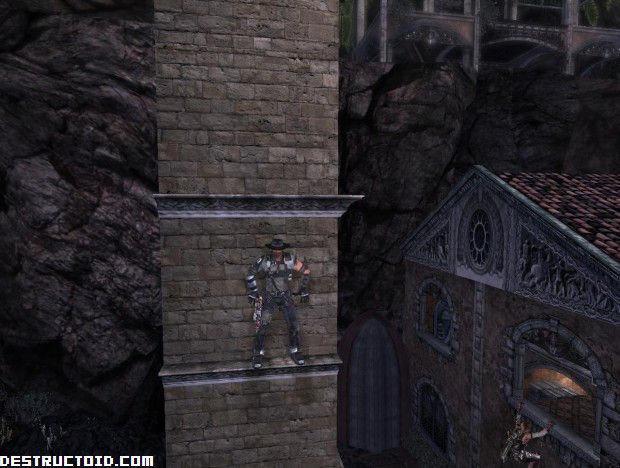 Every now and then, the dreary repetition of shoot-climb-shoot-climb is broken by a motorbike section. Every now and then, main character Rourke and his band if idiot friends must mount a cycle and whizz along narrow canyons at high speed. Here’s where Damnation almost redeems itself, as the vehicle sections are quite tight and dangerously approach what could almost be considered fun — however, since the environments are so brown blurry, it becomes impossible to tell what’s the floor, what’s the wall, and what’s a giant bottomless pit that will instantly kill you. The motorbike sections quickly become frustrating due to the game’s poor choice in aesthetic.

Speaking of aesthetic, this game desperately tries to be Steampunk but boy, this ain’t Steampunk. In fact, I get the impression that Damnation’s art team overheard a conversation about Steampunk in a busy restaurant, wrote down what they heard on a napkin, and then decided to make a game about it. The napkin also got really moist and the ink smudged a bit. 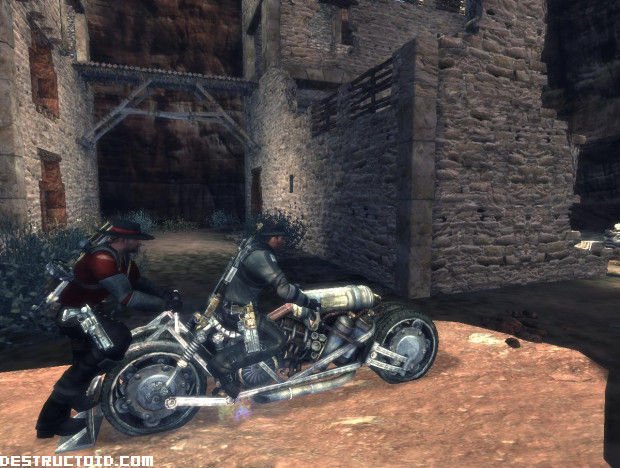 There is multiplayer as well, but I couldn’t get into it, either due to a lack of players or a lack of it working. I can’t imagine it would be better with human players though, because you’d need to be about as dumb as the enemy AI to enjoy Damnation enough to take it online.

The whole dull package is complimented by some bottom-of-the-barrell graphics that require lengthy loading times without any good reason. Why is it that games that look bad always seem to take longer to load than games that actually have amazing graphics? I’ve never understood that. Anyway, this is what Damnation does, presumably in an attempt to become an even bigger waste of time than it is.

Damnation is not exactly a terrible game. As a shooter, it does the bare minimum required to be considered competant. It’s just incredibly mediocre and pointless that it’s made me wonder exactly how games like this even get the green light. There is simply no good reason for Damnation to exist. In fact, by the time this review is ready to post, I’ll have forgotten that it ever had done.