The surreal mixing of Hollywood references, real-life political terminology, and sci-fi craziness has long been a staple of Konami action games, but the Contra series takes that special brand of weirdness to another level. In real life, a “Contra” is a member of the guerrilla force that opposed a left-wing government in Nicaragua in the 1970s. In the Konami games, a “Contra” is a muscular Stallone/Schwarzenegger look-alike who battles jungle aliens while shirtless, sometimes in the 1970s. What’s the connection between the two definitions? Are the Contras of the Konami series actually political activists disguised as alien exterminators? Is the game trying to tell me that Rambo is a secretly a Latino? What the hell is really going on here?

Well, after more than 20 years of such questions, Contra ReBirth has come forward to finally deliver some answers. Not only does the game give us the full reveal on Konami’s definition of “Contra” for the first time, it also provides us with a game that exemplifies everything that makes the series so special. For better or worse, Contra ReBirth is the Contra-est Contra game in recent memory.

Hit the jump for the full review of Konami’s latest take on guerrilla warfare. 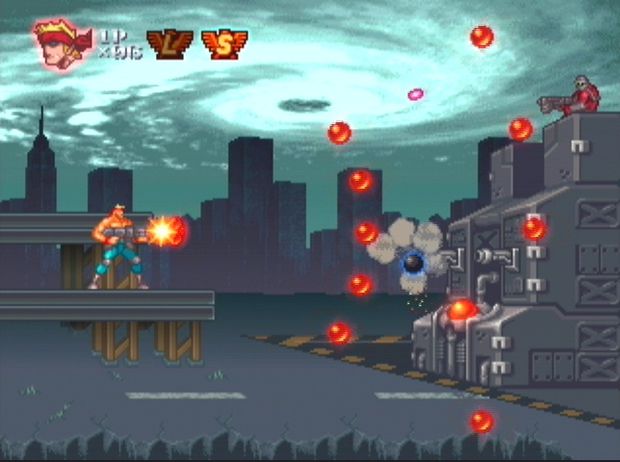 Contra ReBirth solidifies what the now-two-games-deep ReBirth series is all about. “ReBirth” in this context doesn’t mean “re-imagining” or “reinvention,” as you might guess. Instead, these ReBirth titles are love letters to the games that came before them. If you ever loved a Contra game, you’re sure to enjoy Contra ReBirth. That said, even without the Contra name, Contra Rebirth would still be a short-but-sweet, entertaining, even funny two-player shmup with charm and excellence to spare.

I fell in love with the game before I even started playing it. The opening cinema blew my mind. The inclusion of a real-life military leader/political activist into the game’s narrative shows that the writers behind this game truly understand the special real-history/Hollywood/fantasy connections that make the Contra world what it is. I don’t want to give away all the details, but rest assured that references to multiple Stallone movies, American sci-fi epics, and real wars are a part of the game from start to finish. In other types of games, this kind of stuff might seem stupid, but it all makes sense in the world of Contra. This is war, as seen through the childlike perception of someone who learned everything they know about warfare from going to the movies and watching the evening news. This is the glorification of blowing stuff up and taking bullets for only vaguely understood ideals, against an enemy that you don’t know a thing about. Being a Contra is being a man who bravely fights against insurmountable odds all for the sake of, um, I don’t know… whatever. It’s as ridiculous as it is awesome, and that’s what makes it Contra. 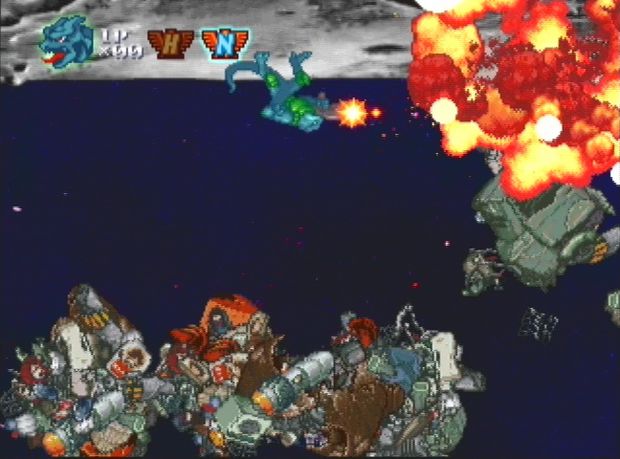 The game itself plays out like a concentrated blast of set pieces influenced by other Contra games. Like with Gradius ReBirth, all the music here comprises remixes of stuff from past Contra games, ranging from the first game all the way up to Hard Corps. Contra ReBirth consists of five stages, with stages one, three, and four being only vaguely reminiscent of prior Contra games, and stages two and five being more direct lifts from levels of previous games. Though a few are recycled, there is little to no filler in any of these stages. You can expect to see a new enemy, mid-bosses, and environmental hazards to pop up at least every two or three minutes. The game only contains three guns from the traditional Contra arsenal: spread-shot, homing missile, and laser. That may seem a little small, but those are the three weapons that everyone likes the most anyway. That design decision pretty much sums up the Contra ReBirth credo — cut out the fat and give the player non-stop Contra-ness from beginning to end.

The game does a pretty good job of it, too. Its large bosses, constant explosions, and extreme situations almost always keep pace with the best moments of past Contra titles. The game looks exactly how you probably remember Contra 3 on the SNES looking, but compare the two face to face and you’ll see that the animation in ReBirth is much smoother, and the sprites themselves are at a higher resolution. Nothing here quite matches the silky-smooth visual majesty of Contra 4, but there are plenty of big-time, old-school set pieces to make up for that. 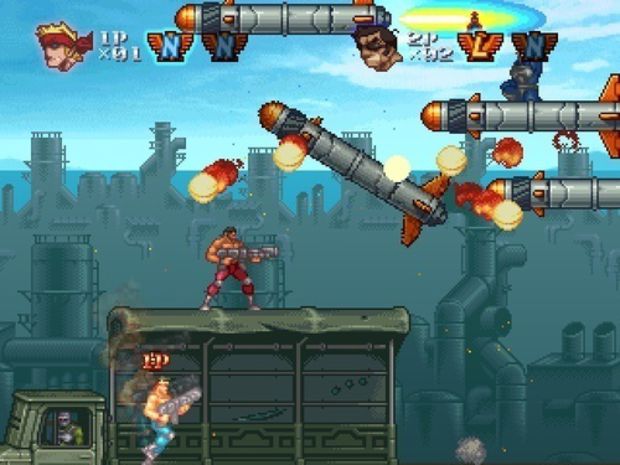 Hopping on bits of debris as you re-enter Earth’s atmosphere, all while fighting off a giant space crab/caterpillar, is one of the earliest examples of the game’s efforts to keep pace with Contra 3 and Contra 4. Later, you’ll hang for your life from the ribs of speeding purple robo-llamas, and blast an alien ninja hanging from an incoming rocket as you dodge a screen-filling barrage of flaming shurikens. Sadly, the game peaks a bit early. Stage 3 is clearly the most fun that the game has to offer, and from there, things get a little less awe-inspiring. That’s okay, though, because even at its, worst the game is still a lot of fun, and it throws out one last gasp of glory in the form of its “true” last boss (only seen on Normal difficulty and higher). Your final victory is then punctuated by what is probably the funniest display of videogame logic in recent memory. Again, I don’t want to give it away, but let’s just say that Dutch from Predator would be proud.

Speaking of difficulty, Contra ReBirth is a lot more fair than Contra 4 and the other more punishing entries in the series. The game is still tough, especially on Hard difficulty and above, but it never relies on forcing the difficulty by overly limiting your allowance of continues or extra lives. Even on the hardest difficulty, you have unlimited continues, and each level has at least one mid-level checkpoint. You may get killed tons of times in this game, but you’re rarely forced to start too far from where you last died, which keeps things exciting without ever becoming too frustrating. Fans of Contra 4 may find that disappointing, but c’mon, guys — if you really want the game to have limited continues, just use some self-restraint and limit the amount of times you continue yourself. 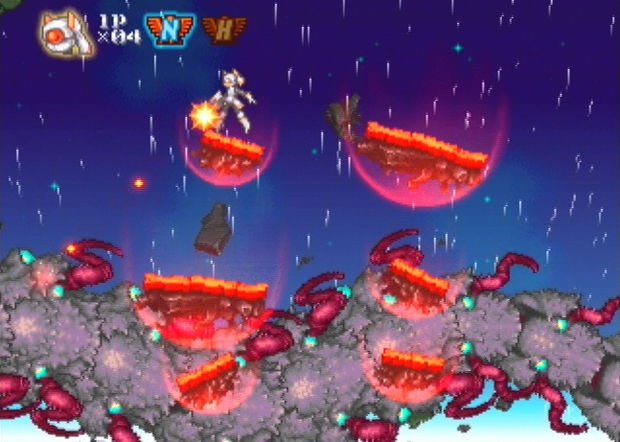 The game does cheat a little when it comes to replay value. In order to unlock all the game’s content (including extended endings, two new characters and an extra difficulty level) you have to beat the game on Easy, Normal, and Hard modes. This forces you to to play the game at least three times over to really get it all, effectively extending its total length without really adding too much content. That said, the four difficulty settings do offer fairly different experiences, which shows just how much of an impact enemy placement and frequency can have in a game’s design. That robo-llama section I told you about? On Easy, it’s a death-free cake-walk, on Normal it involves some risk of life, and on Hard it’s a true videogame “trial of life,” complete with swear-inducing instant deaths and need for pixel-perfect platforming. Of course, playing the game with a friend helps make the experience less difficult, but not even backup from a buddy can make robo-llama gymnastics any less dangerous.

The only complaints I have about the game come from what it’s missing. It’s a bummer that the leaderboards and recordable replay feature from Gradius ReBirth didn’t make the jump to Contra ReBirth. Also, even at its meatiest, the game is still a little on the light side. Other than the comedy elements and the new characters, the game doesn’t really add anything to the overall Contra experience. Stages are generally half the length of those found in Contra 3, and the average player will beat the game’s Easy mode in under half an hour. Die-hards will be playing Contra ReBirth for a lot longer than that, though. I still can’t beat Nightmare mode, but I know that for the next few years, I’ll have fun as I die trying. 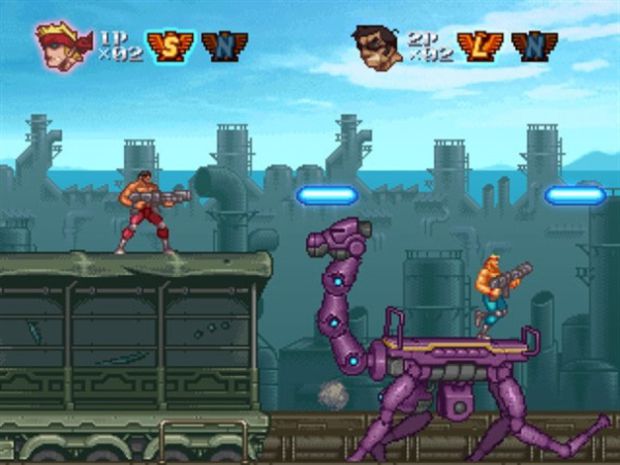 Contra ReBirth will likely come off as a bit of a letdown for those going into the game expecting Contra 5. This isn’t an extension of Contra 4, or even Contra 3. It’s a gaiden game; a lower budgeted, high-fructose snack to tide you over between sequels. Still, there are a few things that the game does better than other titles in the series. It’s the only Contra game I’ve played that’s intentionally funny, and it seems to be completely aware of the full scope of the series’ appeal. If Contra 4 was too frustrating for you, this could end up being your favorite Contra game of this decade. Fans of the series and the run-and-gun genre should pick this up without hesitation. Contra ReBirth is both a nice tribute for fans and the perfect place to start for those Contra virgins who’ve ever wondered what the series is all about.