It seems that few developers, independent or otherwise, can create endearing and memorable original characters and properties for videogames. So when Austin, Texas-based Twisted Pixel Games seemingly came out of nowhere with its imaginative downloadable adventure The Maw in 2009, I took notice.

When it hit it out of the park less than a year later with the refreshingly unconventional ‘Splosion Man, I knew my initial instincts were right: Twisted Pixel is a developer to keep a close eye on.

The team is back with its third adventure, Comic Jumper: The Adventures of Captain Smiley, complete with a fresh set of characters and gameplay that veers wildly from its previous efforts. Given the developer’s history, it should come as no surprise that Comic Jumper happens to be one of the most refreshing and off-the-wall games you’ll play this year.

Comic Jumper introduces players to the washed up super hero known as Captain Smiley and his “chestkick” Star, the salty, trash-talking emblem that lives on our plucky hero’s chest. With Smiley’s comic book series canceled and destined to languish into obscurity, Twisted Pixel steps in, completely demolishing the fourth-wall, and offers him a chance at redemption. The developer (depicted as a group of all-knowing, labcoat-wearing scientist types) creates a technology that will allow Smiley and Star to hop into other, more successful comic books, raking enough money in the process to revive the former hero’s moribund career.

This unorthodox set up for a game allows Twisted Pixel to insert Smiley and Star into four very disparate comic books series, each with its own visual and audio style, as well as distinct characters. The game begins with Captain Smiley’s own series, a colorful, modern take on today’s super hero strips. You’re later transported to the world of Nanoc: The Obliterator, a book that evokes the style of mid-70s fantasy comics, with a clear inspiration from the work of artist Frank Frazetta. Improbable Paper Pals looks to Silver Age-style comics, when strict codes came down hard on profanities and references to drugs and sex, but overlooked stereotypes and chauvinistic attitudes of the era.  Finally, there’s Cutie Cutie Kid Cupids, a black and white, shojo manga-inspired comic book. 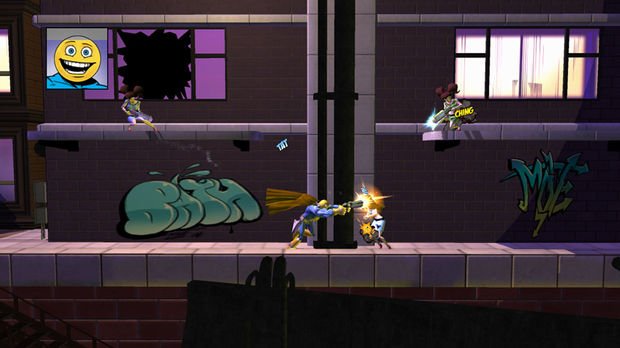 With each book that Smiley and Star jump into, there’s a drastic change in their appearance to match the world around them. Each of the game’s comic book worlds are remarkable and distinct, with fresh color palettes, music styles, and sound effects to match the new themes and characters presented. In every case, while the core gameplay doesn’t change (unless you count the right-to-left scrolling in the manga level to mirror how the Japanese language is read), the worlds feel so new and striking that each is a joy to play and discover.

Perhaps the fact that the gameplay isn’t particularly varied from area to area is Comic Jumper’s biggest failing. Heavily inspired by Treasure titles like Gunstar Heroes and even SNK’s Metal Slug, the game is a “pew pew” shoot ‘em up through and through, with few things to mix it up. It’s all about pattern memorization and on-your-toes thinking, with some “bullet hell”-style sequences that can sometimes get frustrating and even feel a bit “unfair” on the first few tries.

It’s fun, to be sure, with solid controls and a challenge level that borders on controller smashing, but never really crosses the line. The game’s liberal uses of checkpoints and unlimited lives make the game feel easier than it is, although top leaderboard placement (each level has its own online scoreboard) will require flawless level runs and will have perfectionists (and competitive players) digging back in for more. 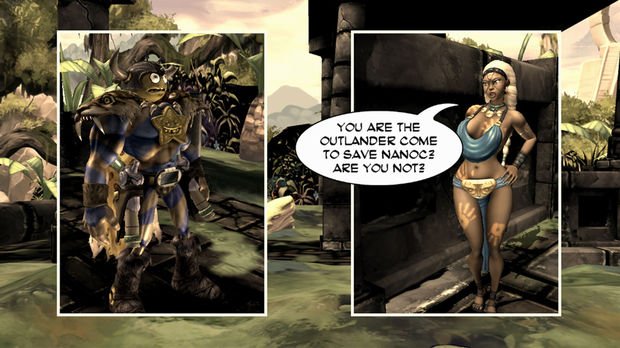 While the game even notes its repetition (Star makes a few “this again?” comments on more than one occasion), Twisted Pixel does mix things up with on-rails over-the-shoulder reticule shooting sequences and 2D side-scrolling beat ‘em up-style areas. The latter is regrettably simple, with one button performing a basic attack and another simply used to keep enemies at bay. The on-rails sequences are actually quite enjoyable, with the player given a bit of control over Smiley as you’ll move left, right, and jump to avoid obstacles and enemy fire.

Comic Jumper’s real strength is in its writing and presentation, which makes it one of the most hilariously oddball games of the year. Twisted Pixel introduces players to a whole crew of unforgettable and humorous characters, each with their own notable personalities. The game’s dialogue (which sometimes borders on juvenile, but I ain’t complaining) is consistently hilarious throughout, and even when jokes fall flat, the voice actors deliver the lines in such a ridiculously believable fashion that it’s hard not to crack a smile.

Twisted Pixel’s original music is even more entertaining, from one villain’s incomparably pompous theme song to an amusing ditty that plays while you’re looking at your in-game stats. Twisted Pixel even manages to smash the fourth wall in yet another way, weaving in live-action sequences as cut-scenes, along with one special attack that has the developers literally entering the game and smashing up enemies on the screen. 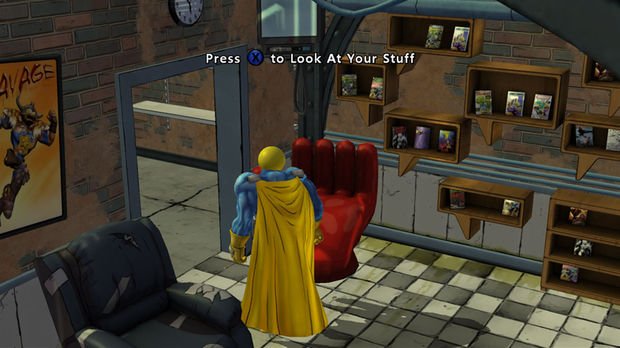 There’s also a ton of content packed into the game, which pushes the boundaries of Microsoft’s 2 GB Xbox Live Arcade size limit. While each of the comic worlds are only three levels a piece (plus an additional level that serves as the game’s finale), there are a number of one-off challenges that are unlocked as you progress through the game’s story. These challenges each have their own leaderboards and cash rewards based upon how well you perform.

You’ll already be used to spending the cash you earn completing comics on upgrading Smiley’s abilities, but beyond that, there’s a slew of unlockable extras. It’s your expected stuff like art, character models, comic panels, and behind-the-scenes video. But when I say there’s a lot of it, I’m not kidding around; it’s staggering the amount of stuff you can purchase. It’s not an exaggeration to say that this may be the most additional content I’ve seen in any game, including full disc-based retail titles.

It needs to be noted that this isn’t throwaway content either; you’re going to want to unlock it all, just to see what’s hidden behind the nondescript cubes in the unlock shop. While I’m not one to go out of my way to earn all of these extras, it’s usually because the content it’s bland, self-serving behind-the-scenes content more interesting to folks who worked on the project than gamers at home.

That’s not the case here, as Twisted Pixel’s humor and vibe carries over into the extras, including some positively rib-tickling (yet obviously staged) voice actor interviews. It’s rare that a game’s bonus content is as entertaining as the game itself; if nothing else, Twisted Pixel has really raised the bar in this particular area. 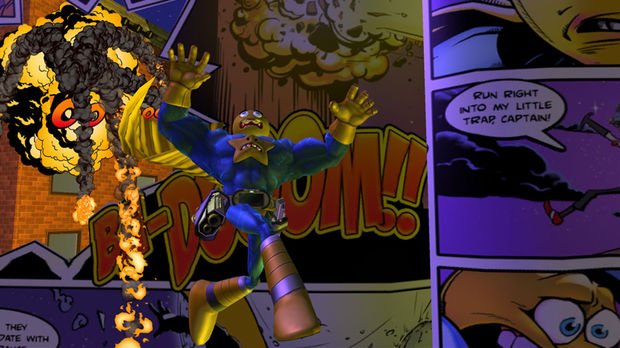 Compared to Twisted Pixel’s previous outings, Comic Jumper doesn’t stray too far from its side-scrolling shooter influence, arguably to its detriment. But despite being guilty of the all-too-common crime of gameplay repetition, Comic Jumper makes up for it in nearly every other aspect. From its irreverent, laugh-out-loud script to the spot-on comedic delivery of the game’s voice actors, Comic Jumper still manages to be one the most distinctive and memorable titles of the year.