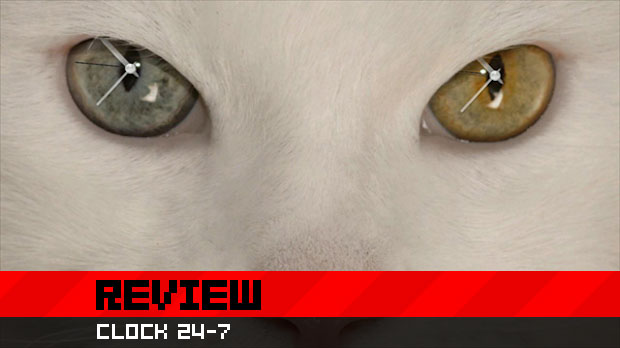 The Xbox Live Community Games channel empowers budding game developers to create their own blockbuster titles in the hopes of attracting attention and one day becoming the next Shigeru Miyamoto. At least in theory. In practice, it’s a place where you can make a pretend clock and then sell it for 200 Microsoft Points.

Welcome to the official Destructoid review of Clock 24-7, a “game” that does exactly what it promises. It’s a clock. I have no idea how I’m going to review this, but it was submitted to our Community Games Challenge and I am duty bound to review it.

Accurate methods of keeping the time have been sought after for centuries. In ancient days, the sundial was the only effective tool in the armory of the timekeeper, measuring shadows cast by mankind’s redeemer and ultimate betrayer, The Sun, in order to tell what time of day it was. It was not entirely accurate, and was prone to failure during times of Sunly obscuration, such as intense cloud-based shenanigans or that eternal nemesis of daylight, Old Man Night.

Candle clocks and sticks of incense have also been used in the past, using the speed of their demise to get a measure of the passage of time. The hourglass was literally a glass with an hour in it. Not literally, but metaphorically. In a literal sense. An hourglass was shaped like two large meat puddings with a tiny hole separating them. Sand would pour through the hole with one pudding completely emptying its sandy wares upon the hour. The hourglass, or sand timer if you will, could then be turned over to repeat the process. Unless it was a disposable hourglass that needed replacing. The disposable hourglass was exactly the same as a normal hourglass, but owned by idiots who did not realize you could turn it the other way.

Water clocks are thought by some to be the oldest of man’s timekeeping follies. Also known as a clepsydrae, it worked in the same way as an hourglass, except it was shaped like a bowl and water would fill it up. We can go even further back, however, to a day counting device known as the tally stick, which we only mention because it sounds funny.

13th and 14th Century Europe made great use of timekeeping devices, due to the fact that work schedules and the daily prayers (like The Daily Show, but with a slightly more religious bent) needed to be monitored closely. Between 1280 and 1320, the word “clock” is seen in many records, leading scholars to believe that some new type of mechanism was invented during this period. Water-powered clocks were being adapted to use falling weights as a means of achieving power, which was then controlled by an oscillating mechanism. This marked the beginning of the first true mechanical clocks.

This brings us to the modern day, and the clock’s final resting place, known as Clock 24-7. This Community Game is a living clock that you can look at with your eyes via the gift of your television screen. It’s not just one clock though, OH no. It’s like, sixteen or something! So many clocks to choose from, so little time! Choose from a range of clocks, and by clocks we mean pictures that someone has superimposed moving clock parts onto. Using the the internal clock of the Xbox 360, you can even make Clock 24-7 tell the correct time! Amuse your friends, confound your enemies.

The intricate hand physics accurately simulate the movements of an actual clock, creating a sense of immersion and realism rarely seen in your average XNA-developed virtual clock experience. The variety of clocks include numbers and shapes. Some of the clocks represent traditional clockwork and electronic devices, while others get a bit more crazy, like everybody’s favorite cut-in-half orange. You’ll need to peel yourself away from that juicy little clock, you can citrust me on that one!

… Seriously though, what can I actually say? It’s a fucking clock.