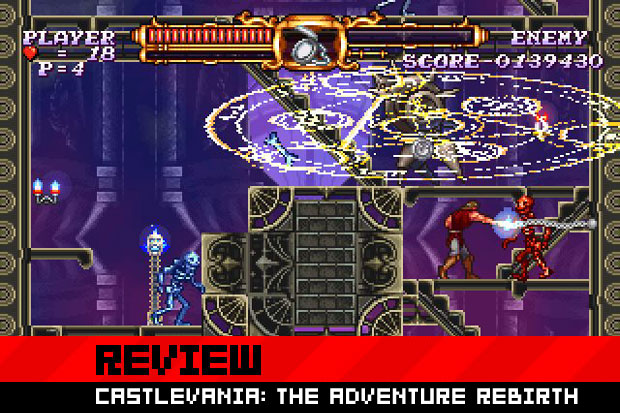 One of my New Year’s resolutions is to cut to the chase, so here goes.

As for the rest of you; those who have never played a Castlevania game or don’t have an opinion about them, you guys should hit the jump. That’s where I won’t cut to the chase, and actually explain what makes traditional Castlevania games what they are, for better and worse, richer and poorer.

How was that? Concise enough?

Okay, so if you’ve really never played a traditional Castlevania game, here’s a quick rundown: these are games about whipping stuff. The Belmont family likes to whip candles, whip midgets who ride giant eagles, whip brick walls for meat, and eventually whip Dracula in the face until he gets pissed and turns into a giant bat-monster. The king of all Vampires, Frankenstein’s monster, dragon skeletons, mud zombies, and giant bats made out of other bats are all frequent fliers (lolpunlol) in the Castlevania world. The games are mostly known for these traditional Gothic horror elements, classic monsters and mythological beasts, but Hell, so are half of the action/adventure games of the ’80s and ’90s. They’re not what makes the Castlevania series special.

If a 2D platforming series is going to survive for 20-plus years, it’s got to have more of a hook than that. Sonic has speed, Mega Man has the strategic boss weapon acquisitions, Mario has the constant jumping, but what does Castlevania have? What’s its shtick? I’ve been playing these games for more than half my life, and I still don’t know for sure.

That doesn’t mean I don’t have a guess, though. After some hardcore pondering, here’s what I’ve come up with. From what I can tell, every traditional Castlevania game is about one thing at its core: getting about six in-game feet away from something (which is about a jump/whip length’s distance) and staying there long enough to whip it to death or jump on it (respectively). You never want an enemy or an obstacle to be too far away, because then you won’t be able to hit it or jump over it (respectively). Likewise, you never want stuff to get too close to you, either, because touching just about anything in Castlevania means taking a hit (even the back of a blue bat’s ass). Most of the game’s enemies are constantly trying to get close enough to you to hit you, while others do their best to keep their distance and lob you with projectiles. Getting close enough, but not too close, is the constant dance that makes Castlevania games interesting.

Castlevania isn’t alone in this type of gameplay. Rygar, Strider, Rastan, and all the old melee-themed 2D action/platformers were like that. It’s the way that Castlevania games limit you from doing anything else but get within whip/jump length’s distance from something, and the many ways the game’s enemies circumvent your efforts, that makes the them special. The classic Castlevania games are an exercise in both variety and economy. That formula is why we’re still playing this brand of Castlevania game.

There is a slight variation in the “whip length’s distance” paradigm. Just like the Game Boy game with the same name, Castlevania: The Adventure ReBirth stars Christopher Belmont. Visually, he looks pretty much like every other Belmont. The thing that makes him special is his fireball-flinging whip, which temporarily allows you to attack from farther than a whip’s distance away. This gameplay upgrade is actually what caused me to realize just how much these games center on the task of getting whip-close to stuff. The fireball whip is time-sensitive. It only works for eight or nine seconds, just long enough to show you how hard it actually is to take on a castle full of ghosts and demons with nothing but a whip (and the occasional sub-weapon).

So that’s the economy part of the formula. The variety comes in the form of the game’s six stages. Each has a specific theme, be it relentless, sentient, giant ghost eyeballs (yes, that is a theme); dark and foreboding, waterlogged caves (complete with giant, flying jellyfish); blood spike-laden dungeons; a lost woods-like maze; or the traditional Castlevania clock tower (complete with functioning, but illogically placed, giant pendulums). No two stages feel the same. Though there are a lot of familiar trends to be found here, there are also quite a few surprises. If I told you what they were, they wouldn’t be surprises anymore, but I will say that just about every boss in the game has a desperation attack that they only pull once half of their health is gone. It was during these attacks that I most often saw myself burst into a airborne puddle of blood.

Speaking of bosses (and puddles of blood), the game has multiple mid-bosses as well, at least one per level. You won’t see them all in one play-through. It took me at six plays to find them all, and even now I still feel like I’ve missed something. Just like in the fan-favorite Castlevania: Rondo of Blood, these large and unpredictable levels do a lot to make the game’s world feel like a real place. Another nice “realistic” touch is the variety of environmental hazards that can hurt both you and your enemies. Luring a group of skeletons into a giant spear trap or cutting a chandelier free to see it crush a skinless snake-dragon below is always a good time.

As for the graphics, first things first: if you’re playing on a widescreen TV, adjust the game’s display (in the options menu) to fit your screen as soon as you start playing. This will go a long way towards helping you enjoy yourself. The game’s characters don’t have quite the same level of animation as those found in Symphony of the Night, but it’s definitely up there. Occasional polygon-based effects and detailed, parallax-packing backgrounds give the game a lot more pop than the other ReBirth games Konami has released thus far.

The game’s music, on the other hand, didn’t suit me all that well. I know a lot of fans love it, and are already clamoring for the release of the soundtrack (which should be coming out in Japan in March of this year), but for the most part, it took a while to grow on me. The compositions themselves are great; all are taken from past Castlevania games and all are packed with neo-classical, pop-goth panache. My problem is that all the synth and wah-wah found here is really in-your-face. It’s purely a style gripe, and has nothing to do with how well the music is crafted, but it’s still worth mentioning. Turning down the music’s volume to half-power did a lot to alienate any troubles I had with the way that it’s orchestrated. That also helps you to hear the game’s sound effects, which are way more awesome and bizarre than they deserve to be.

As for overall length, it took me about four and a half hours to beat the game the first time on normal difficulty (after dying at least sixty times), and about five more to play through it again enough times to see all of the hidden paths. I expected something to happen for all my effort, but so far I haven’t found anything. Unlike Konami’s two other two ReBirth titles, Castlevania: The Adventure ReBirth doesn’t seem to have real unlockables. Other than a “classic” mode (which doesn’t do anything except make your jump harder to control and your flame whip more temporary) that you unlock after playing the game and restarting once, there’s nothing in terms of bonuses. No extra characters, no secret boss rush mode. Nothing. This is a game that that expects you to play it because you enjoy it, not for Achievements or other faux-collectibles.

When I say this game expects you to enjoy it, I mean it. This game thinks that you want to start playing it again from the first level each time you boot it up. It has no save system. Just like in the original Castlevania, you can continue as much as you want, but if you turn your console off, you’re going to have to start over from scratch next time you play it. For me, that worked fine. Being forced to replay the game led me to more quickly explore levels I’d already seen, to find new paths and expand my overall experience. It also didn’t take very long to play through things the second (and third) time, as once you learn how to take on a given level or last boss, they won’t give you half as much trouble as they did the first five or six times they killed you. Still, I can envision a lot of people being extremely annoyed with the game’s refusal to let you save. Not giving players options is always a bad idea.

That design flaw and the synth-y soundtrack are my only real problems with Castlevania: The Adventure ReBirth. Otherwise, it’s a great game (superb, even) and is sure to satisfy any and all people who like this sort of thing. It also makes for a great $10 jump-off point for people who have never played a Castlevania game before. In just a week, Castlevania: The Adventure ReBirth has become one of my favorite games in the series. Good job, Iga and company. Now if you (or Kojima) could just make a 3D Castlevania game that’s this fun, then I’d really be impressed.

[UPDATE: Turns out there is a secret stage select trick that effectively lets you restart from any level that you’ve beaten. This fixes my initial complaint about the game’s lack of a save feature, but seeing as this is information that players (like myself) wouldn’t necessarily know when first playing through the game, I’m not going to change the game’s official score. In my mind, the score has in fact changed from an 8.5 to an 8.6985472123, but actually telling you that would be sort of silly.]