It would be easy to criticize Castlevania: Lords of Shadow for not being a “real” Castlevania, abandoning as it does all of the trappings that have made previous games familiar. It bears little resemblance to either the original platform games or the relatively recent “Metroidvania” titles. In fact, Lords of Shadow resembles a Castlevania game almost solely in name only. 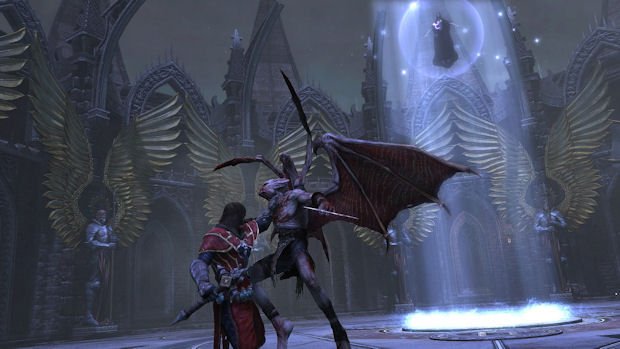 Videogames are never ashamed to borrow from each other. It’s how this industry evolves. A certain gameplay mechanic works, it gets copied by other games, and that game’s particular genre, as a whole, tends to improve. There are some games, such as Darksiders or Singularity, that make an entire experience out of cannibalized bits and pieces, and they work very well.

However, if you’re going to have the gall to make a game completely lacking in original ideas, you need to piece those ideas together seamlessly, understand why those ideas are successful, and ultimately package them into a fun experience with an original sense of character and that, unfortunately, is where Castlevania: Lords of Shadow completely fails.

Lords of Shadow is as derivative as games get, and there isn’t a single unique idea in the whole game. Whether it’s ripping off Prince of Persia, Devil May Cry, The Legend of Zelda or a multitude of other third person action games, there isn’t anything in this game that you haven’t seen before. While this would ordinarily be acceptable, developer MercurySteam has failed to understand why each of the tropes it copies were successful in their original games, and has thus created a game that looks like a poor forgery of other, better titles. 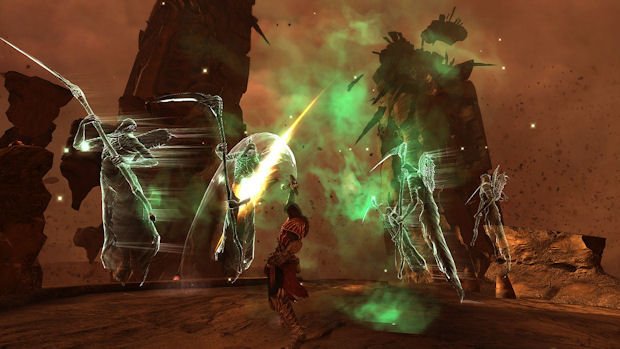 For instance, the climbing sections are boring, and often frustrating. Protagonist Gabriel can rappel from cliffs, but if you rappel lower than the game arbitrarily and secretly decides you can rappel, Gabriel won’t stop. He’ll simply let go of his chain and fall to his death. Many surfaces that can be climbed have been hidden from view, and sometimes the game will simply not tell you where to go.

This is all made worse by the game’s dreadful fixed camera, which often makes the environmental exploration far more difficult than it should be, and sometimes will simply obscure important puzzle pieces or locations. Gabriel is often wont to jump in the wrong direction, or have his movement controls completely screwed up thanks to a poorly placed camera change.

Then there’s the combat, which is a mediocre irritation at best. Most of the enemies are different in aesthetic only. Be they werewolves, vampires, skeletons or goblins, they act almost entirely the same, and all of them are a pain to deal with. Even the most common enemy has a tendency to just ignore Gabriel’s attacks, and almost all opponents have their own overused ground pound attack, the kind that creates shockwaves and are usually only used by big boss characters, but are spammed by even regular enemies in this game for some arcane reason. Even worse, Gabriel’s own combos can be broken by the most simple of attacks. There are advanced combos players can purchase with XP, but they’re almost all entirely useless as enemies will never let Gabriel complete a single move. 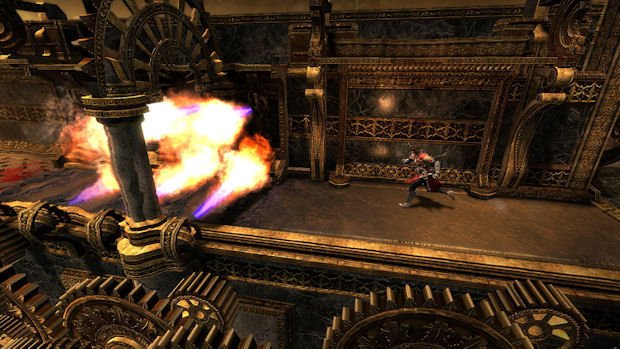 Most of Gabriel’s contextual abilities use the Right Trigger button (on the 360) and this, of course, means that if there are several contextual situations near each other, Gabriel will automatically do something you don’t want him to do. Grabbing enemies, grabbing levers, grabbing items and grabbing grappling hook points are all the same button, and of course this means that our intrepid hero will grab at switches when you want him to grab at enemies, and grab as lucid opponents when you’re trying to grab the stunned ones. Brilliant design, there.

Let us also not forget the several boss fights that attempt to carbon copy Shadow of the Colossus, but fail because of how thoroughly dull they are. Lacking in the sense of scale and thrill that Team ICO’s original game provided, they feel like cheap pirate copies, reproduced by people who understand that something was successful, but don’t know why it was successful. 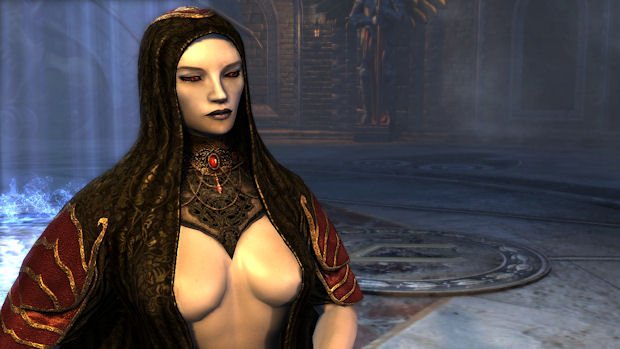 When it’s not copying good tropes poorly, Castlevania is copying bad tropes perfectly. The game is chock full of the kinds of filler that would be considered the obligatory “slow” section of a better game, except this game is made entirely of them. There is a whole level that consists of those horrendous slow rotating levers, there are doors that need to be opened with quick-time-events and there are boring light-and-mirror puzzles that crop up with alarming regularity. These things got old in the last generation, and have absolutely no business being in a modern videogame. Seriously … mirror puzzles in the year 2010? Why don’t we all start riding horse-drawn carriages again while we’re at it?

If mirror puzzles aren’t your thing, there are plenty of others, ranging from arbitrary to thoroughly pointless. Sometimes, entire levels are devoted to a certain type of puzzle, regardless of how out of place they feel when considered with the rest of the game. Often you’ll be able to choose to unlock the solutions to these meaningless mindbenders, or skip some entirely, at the cost of an XP reward. This can often be a recommended choice to make, given how most of them slow the already lagging pace down to a crawl and the misleadingly titled “hint” scrolls are often absurdly vague.

It’s not like anything in the game is especially dreadful. It’s just intensely dull and full of tired gimmicks that most reasonable people got sick of ten years ago. In gameplay terms, Lords of Shadow feels like a middle-of-the-road PlayStation 2 game. In fact, the 3D Castlevania games on the PS2 felt more action packed than this one does. Lords of Shadow‘s combat scenes are ponderous and repetitive, especially the boss fights, which almost entirely amount to button mashing and last far too long.

Speaking of long, this game is about fifteen to twenty hours, and has all the gameplay of a six hour game, if that. There are long-winded chapters that have no relevance whatsoever and seem shoehorned into the quest out of pure self indulgence. I’d go as far as to say that at least five or six whole chapters could have been cut from the game and nothing would have been lost. In fact, the game might have benefited from not being so bloated. It could have been a better paced and tighter experience if the already thin gameplay wasn’t stretched over twelve chapters, each containing at least three levels apiece (save for the last chapter, which replaces levels with massive, waffling cutscenes). These “fluff” chapters, where the story isn’t advanced and the gameplay isn’t added to, do nothing but pad out the one game this year that needed the direct opposite of padding. 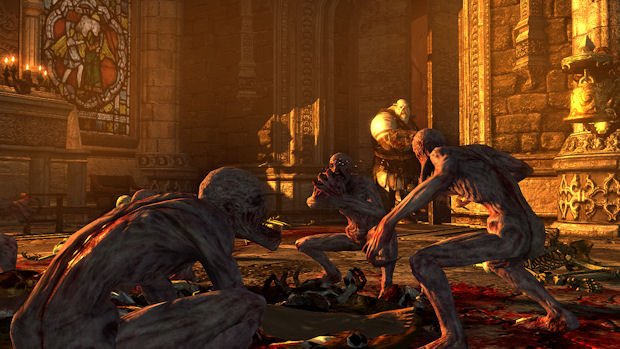 Not only that, but the game attempts to force even more gameplay by hiding items in early levels that require powers earned in later ones to obtain. In an open game like Zelda or a cleverly designed title like Metroid, this backtracking is acceptable. However, Lords of Shadow‘s linear levels mean that when you return to a previous stage, you have to beat the entire thing from beginning to end again, just to get the item you came for. You can’t even return to the World Map once you obtain the item either, as your progress only saves at the very end. It’s a transparent and inexcusable attempt to bump up the running time, and when the game is already too long, it defies all logic as to what MercuryStream were thinking, unless it believes that game length automatically equals value for money (a shockingly poor misconception that we as gamers have unfortunately encouraged).

Add to all this a narrative that could be considered banal at best, and you have a recipe for a game that utterly fails to compel. It takes some doing to make me tired of Patrick Stewart’s voice, but after twelve loading screens full of overwrought, over-acted exposition that desperately tries to tell us how we should be feeling because the game itself doesn’t communicate any of its narrative concepts properly, I wanted one of my favorite actors to just shut up. If only the script made a lick of sense, or Gabriel acted as hateful and corrupted as the loading screens tell us he is, then the piss-poor story might have been enjoyable in some way. However, this isn’t the case.

It would be dishonest to say that the game never occasionally threatens to be exciting. A few standout boss fights, such as the Evil Butcher, the Grave Digger or the final battle, are pretty intense and rather fun. These are mere glimmering gems buried in mounds of turgid compost, however, and do little to heighten the overall dreariness of the adventure. It also has to be said that the game’s epilogue is fantastic, but all that does is make me miserable that the rest of the game wasn’t up to that standard. 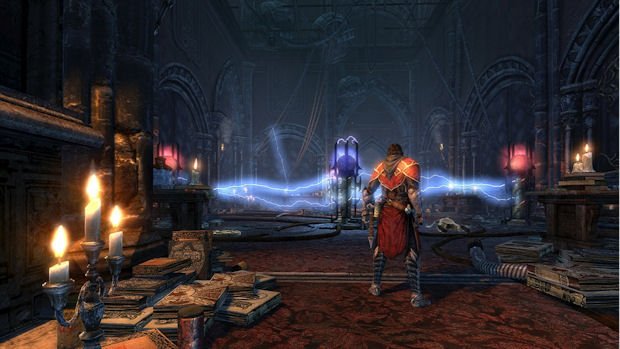 At least the game’s visuals aren’t as dismal as the rest of it. Lords of Shadow is most definitely a pretty game, with some terrific animation and rather inspiring environments. Even the darker and more brooding levels manage to be vibrant and gorgeous to look at. The sound doesn’t hold up its end of the bargain, relying on generic sound effects and a generic soundtrack, but Robert Carlyle puts in a solid performance as the main character.

Castlevania: Lords of Shadow is fifteen hours of cobbled together gameplay that could be considered functional at best and worthless at worst. It’s a Frankenstein’s Monster of other peoples’ ideas, stitched together in a haphazard and clueless way, totally bereft of soul or meaning. The easily impressed may be fooled by the game’s undeniable production values and allow themselves to be tricked into thinking they’re playing a masterpiece, but if anything, this title is a poor man’s Dante’s Inferno. Depending on your outlook that may make it a hobo’s God of War.

Not only is the game completely unoriginal, it doesn’t even manage to be seamless and competent with its copying like an unoriginal game needs to be. There’s no justification for Lords of Shadow. It’s simply a second-rate title that might have been good a decade ago, but doesn’t need to exist in this day and age.