I would imagine that, if I were to ask any given Borderlands fan, they’d tell me that the third time’s the charm: following “The Zombie Island of Dr. Ned” and “Mad Moxxi’s Underdome Riot,” Gearbox’ third DLC pack, “The Secret Armory of General Knoxx” might be the best.

As far as I’ve been keeping tabs, “General Knoxx” addresses most fans’ complaints thus far: it raises the level cap, introduces new enemies, weapons, and class mods, and even provides something akin to end-game content. Alas “General Knoxx” isn’t perfect; a handful of flaws — some fresh, some familiar — rear their ugly heads. 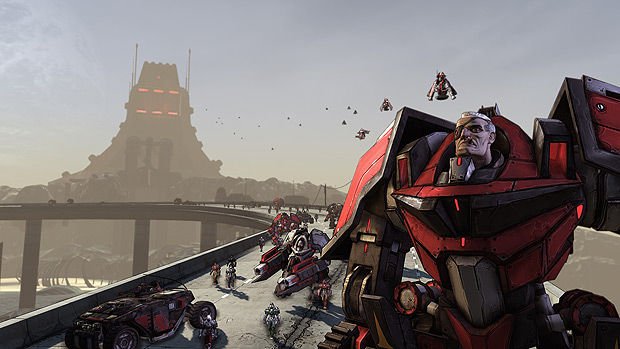 “General Knoxx” takes players post-Vault: the ragtag hunters seem comfy on Pandora after thwarting Atlas Corporation’s attempt to raid the Vault’s coffers, and a new colony has popped up in the desert. Friendly faces populate this new place, T-bone Junction — it’s a sprawling and well-lived in little space-village.

Gearbox has done a great job making players believe that progress has come to Pandora: Scooter’s developed new brands of vehicles and Moxxi has closed her Underdome in favor of “The Red Light,” a bar-cum-strip joint-cum-brothel.

Unfortunately, Atlas isn’t finished on Pandora. They’re miffed at Mordecai and co. and have put a bounty on their heads, dispatching General Knoxx and a band of elite assassins to stockpile munitions for a renewed hunt for the Vault — if a few Vault Hunters die in the process, so be it. Thankfully Athena, one of Atlas’ assassins, has gone rogue and wants to help you.

And this is a low point for “General Knoxx.” Gearbox didn’t make much of an effort to explain who Athena is or what motivates her, and any semblance of narrative is just an excuse to send you traipsing to a different part of Pandora. “General Knoxx” is clever and funny as always, and Borderlands real appeal lies in shooting people in the face, but it’s certainly a narrative step backward, especially since the “Dr. Ned” pack was so strong in this department. 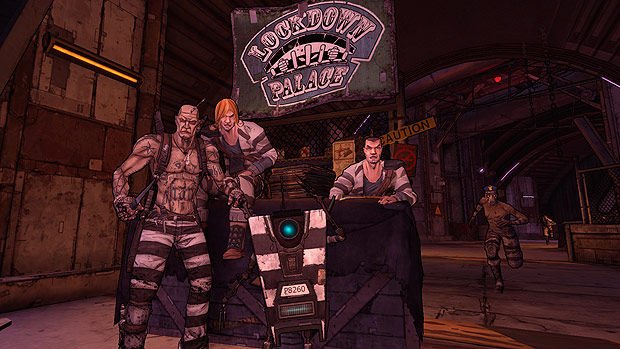 Different areas are linked by long highways, giving players plenty of chances to experiment with Scooter’s new vehicles. Unfortunately, these roads are probably the weakest part of “General Knoxx.”

Crimson Lancer armored cars also patrol the area. Unfortunately, the roads aren’t wide enough to effectively maneuver or fight the Lancers. If you happen to die in the road, you’ll simply re-spawn … right in the middle of the road you just died in. You’ll get run over (or shot by infinitely re-spawning drones) immediately, leading you to re-spawn … in the exact same place. It’s easier just to gun it and hope to outrun your enemies, not a strategy that synergizes well with the shoot-and-loot mechanics that make Borderlands so fun. Given that you spend a lot of time navigating these roads, Gearbox really shot themselves in the foot by making them really f*cking annoying.

A New-U station with Fast Travel would’ve fixed that right up.

Fortunately, all of that changes once you get off the highways and into the vast Pandoran desert. There’s a lot of empty space out there, but I liked having plenty of open space to drive around and learn how each of the three new vehicles handle. The physics are kind of janky on each of them — you’ll flip yourself rather easily — but spinning donuts and being able to jump your car off a bridge really fit into Borderlands’ over-the-top aesthetic. 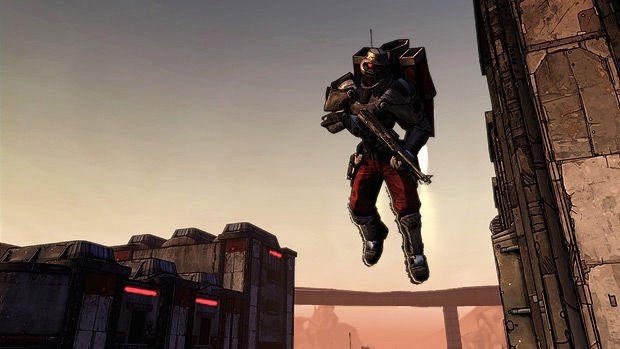 As in the original game, most of the missions in “General Knoxx” are of the go-here-fetch-this variety, but Gearbox seem to have learned a little bit during the past six months of DLC development. Instead of sending you over previously-covered ground, I found that most of the missions in “General Knoxx” sent me to new areas of the map to encounter new types of enemies.

For what it’s worth, these “new” types of enemies are mostly just re-skins of older Pandoran denizens. Nevertheless, there’s a similar sense that Gearbox has been refining the formula: AI seems little quicker on the uptake and less stupidly aggressive. In that same vein: you’ll still be exploring bandit encampments, but they’re more architecturally interesting and varied. There’s a renewed focus on cover – no doubt a continuation of “Mad Moxxi”’s level design — that makes combat feel more natural and organic as ever.

Well, as natural as shooting shotgun shells full of elecricity at people can feel. 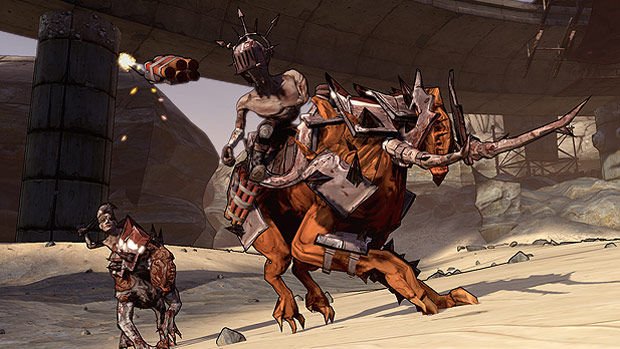 Perhaps the best example of this iterative design is Midgetville, a group of cascading ramps and platforms that create a suspended shantytown populated by skag-rustling midgets. Midgets riding skags sounds like a silly improvement, but the difference in mobility and attack combinations makes a huge difference. The different Crimson Lance troop types — rocketeers, soldiers resistant to fire damage, soldiers in mechs — function similarly: little changes can have enormous implications.

If you want to be assy about it, perhaps the only truly new enemy type is the Drifter, a stupidly tall spider that spits acid. These are only found in the open desert areas, where, as I mentioned earlier, you’ll get the most mileage out of Scooter’s new digs. The Drifters are interesting: they’re certainly aggressive, but they keep their distance as long as you don’t mess with them.

Even better, the Drifters give Pandora an ethereal sense of beauty and wonder: bounding through the desert, weaving in and out of boulders, bridge pillars, and Drifter legs alike can be quite satisfying. 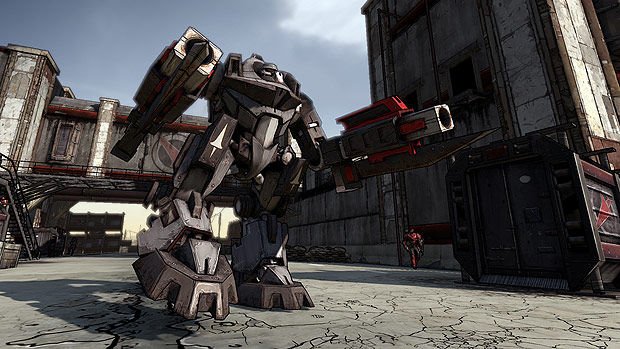 While “General Knoxx” keeps Borderlands broken multiplayer level scaling system — playing with anyone a few levels above or below you is impossible — it does a great job balancing the game. Whereas, in the original game and “Dr. Ned,” doing too many optional missions would quickly over-level you (rendering the game boring), “General Knoxx” keeps everything on an even keel: doing the optional missions nets you great loot and cash (and up to 11 new skill points), but the game keeps its challenge consistent and interesting.

Even at level 61, the end of the game will be suitably tough, and a handful of post-credits missions will certainly keep you on your toes. The toughest missions — specifically an optional boss and another circle-of-slaughter arena — and best loot are saved for last, creating the type of pseudo-endgame content that fans have been clamoring for since Borderlands was released in October.

But even before these optional, endgame missions, “General Knoxx” offers the best loot, experience, and money available, in a fraction of the space and time. While loot rarity and strength is always a function of your character’s level, “General Knoxx” steadily feeds you with powerful and varied loot. I’m not sure what kind of deep calculus governs Borderlands loot drops, but the alchemists at Gearbox have found a way to stimulate that reptilian hoarder mentality better than ever. 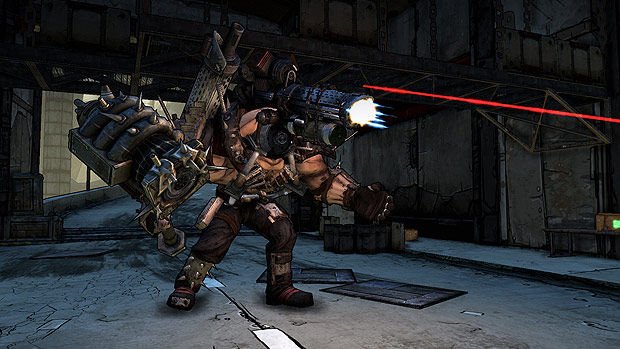 “The Secret Armory of General Knoxx” takes a hit when it comes to story and the overreliance on badly-designed highway sections, but in terms of new content and a big, vibrant world to explore, it’s easily the strongest Borderlands DLC pack to date. With “General Knoxx,” Gearbox plays to its strengths and has taken a few (subtle) steps to perfecting and refining Borderlands’ design.

To put this DLC’s quality in concrete terms: I’ll be hard-pressed to hoof it back to Fyrestone after getting a taste of the superior T-bone Junction.