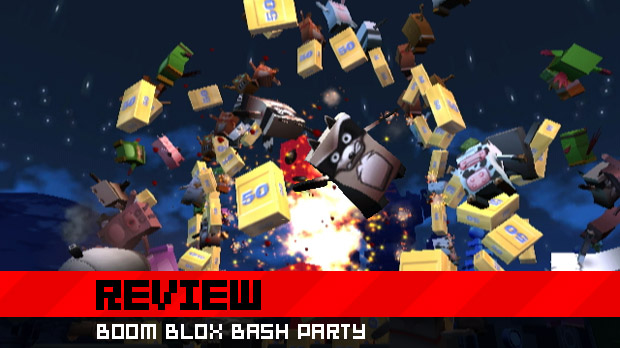 The first time I sat down with my review copy of Boom Blox Bash Party was late one weekday evening. Post-work. Post-supper. Post-motivation. I had grown bored with that evening’s nighttime televisions guests and decided to drop the game into my Wii. The next thing I knew, it was 4 a.m. the next day, and I’m sure I had the face of an addict at that time — pained and tired, but still crazily focused. I made myself sleep, though, and it was then that I had sweet dreams of block busting.

Since then, I’ve made it a point to get my blox fix whenever I think about it. Now I’m playing puzzles I’ve already finished, trying to improve my score. And anyone who wanders by while the game is on is roped into a multiplayer game. My recent life is a constant, blurry image of flying blocks and strange, boxy animals.

Hit the jump to read our review of Boom Blox Bash Party, where I’ll be joined with fellow block basher Nick Chester.

I’ve never liked any of Steven Spielberg’s big, newer projects, like the multitude of alien-based movies. I’m more of a Poltergeist or Twilight Zone: The Movie guy — the older stuff. And give me Amazing Stories or Tiny Toon Adventures over any of that. His latest hit is a videogame, though, and surprisingly, it lacks the fun characters and attention to detail that you expect from his movies. But Boom Blox Bash Party does have aliens. Ugh. More importantly, the game has seemingly endless amounts of fun, based around the simple concept of throwing things and blocks to make them all fall down. Its predecessor, Boom Blox, almost had it right, but now, in this sequel, the formula is perfected.

If you played the original, you’d know that it and its sequel are both fully 3D, physics-based games that have you somehow manipulating pre-staged piles of blocks. Sometimes you’ll knock them down. Sometimes you’ll pick them up. And others you’ll slide carefully, like in that silly wooden game Jenga. This all worked fairly well in the original, but there were some control issues, and after a bit, the lack of variety in gameplay seemed to catch up with it. Also, the single-player game seemed to lose out to the multiplayer action.

I’m glad to say that this all has been resolved in Boom Blox Bash Party. It’s not a different game, just a better one. The control is tighter and more balanced, the single-player game is a blast, and now there are several more play types/projectiles to toss about, all set in new environments that provide even more challenges. 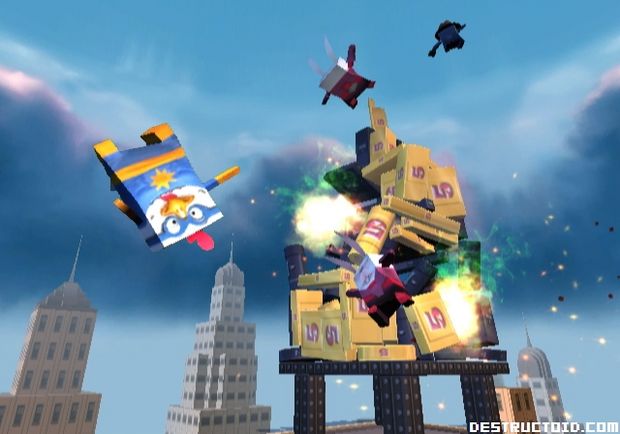 New toys to toss include paintballs, which have you playing a sort of match-three puzzle game. You’ll be given a set line-up of paintballs, and you’ll strategically toss them at blocks to change their colors, with the goal of clearing the game board. Another addition is the virus ball, which, when thrown at a block, infects it. That infection can spread to take out other blocks, adding a whole new level of strategy. A slingshot has also been added. You’ll draw your Wii Remote backwards, just like you would a real slingshot, giving you full control over angle and power of your shot. Of course, the bombs and bowling balls and whatnot are still here, too. All of these and more make for a huge variety of gameplay styles, which manages to keep single-player action fresh. I still don’t love the Jenga-style block sliding puzzles, but at least the game’s physics and gravity seem a bit more forgiving this time around.

Multiplayer is where Boom Blox Bash Party really shines. Tons of cooperative and competitive games await your next party night, and they’re all a blast to play. Blasting each other’s block-built pirate ships with cannonballs is a riot, as is a kooky spaced-based cross between air hockey and billiards, where you’ll use slingshots to hit your opponents’ pucks off the table. There are countless levels to try and play together, but even watching your opponent line up their shot can be fun. And let’s just say this: this is definitely a wrist strap game, especially if you and your friends have had a bit to drink! 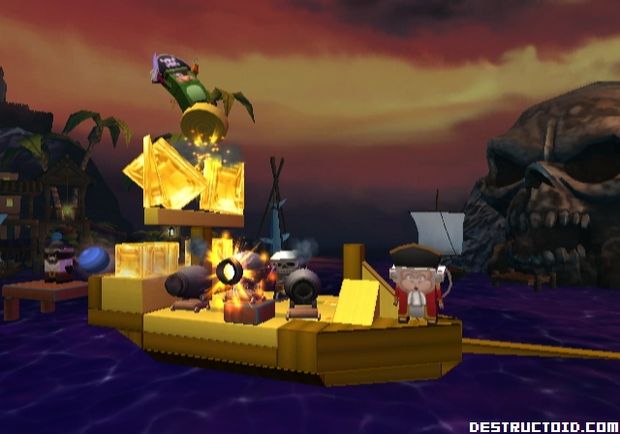 My only beef with Boom Blox Bash Party is the lackluster presentation. I expect more from Steven Spielberg! The square animals are cute, I guess, but they don’t offset the painfully plain menus and generic-looking settings. What’s worse is the audio. Bash Party sounds like the most annoying slot machine ever created. Everything from the soundtrack to the sound effects reeks of the audio that might come out of those hyper-animated penny slots at the entrance of casinos. I don’t expect a puzzle game to have an epic soundtrack, but it shouldn’t have a bad one, either.

In the end, Boom Blox Bash Party is one of those titles that makes you appreciate the Wii’s motion-based control. It works beautifully in this game — we honestly have no complaints at all as far as control goes. There’s a massive pile of addictive puzzles waiting to be toppled over by you and your friends. And if you manage to knock all of those out, you can download more user-created ones or even make your own in a robust level editor. The heaping helping of gameplay here, combined with tight controls and mad multiplayer action, makes for one of the best titles available on the Wii.

I’m unashamed in saying that the original Boom Blox is one of my favorite Wii games of 2008, if not of the console’s life cycle. So I suppose it’s not surprising to learn that I absolutely love the game’s sequel, Boom Blox Bash Party.

Dale’s evaluation that Bash Party is “not a different game, just a better one” is mostly spot-on. However, that might give you the impression that you if you owned the original and conceivably grew tired of it, the sequel might not be worth your time. That assessment couldn’t be further from the truth; not only does Boom Blox Bash Party improve on the original title in all of the ways Dale mentioned, it adds a slew of new content and gameplay types that should be fun to anyone who enjoys fun things that are fun.

All of the new toys and game mode Dale mentioned — the slingshots in particular — are worth the price of admission alone. The creative team at Electronic Arts has put together plenty of exciting Boom Blox playgrounds for you to mess around with, to be sure. But it’s the game’s updated level creation tools, and the restructured and robust sharing system, that truly stand out. Not only can players share created levels with their friends, but these same levels can be uploaded to EA servers, where they are then made available for anyone to download. 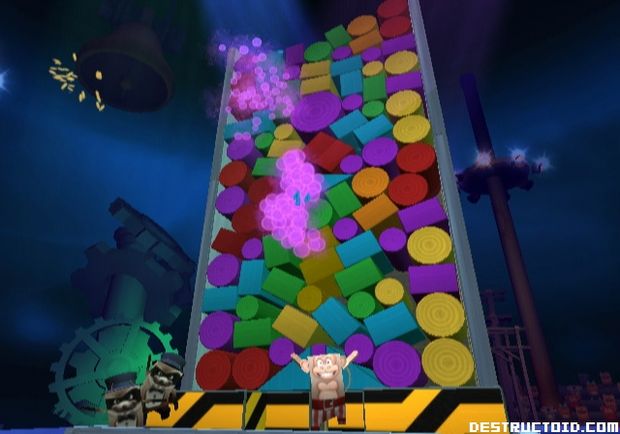 This feature essentially makes the replay value of Boom Blox Bash Party theoretically infinite. Imagine having friends over and playing some multiplayer, arguably one of the game’s strongest points. After a few hours, you’ve played most of the on-disc levels countless times, and you’re ready to call it quits. But now you have a new option, which is as simple as clicking with your Wii remote before you’re presented with a new, never-before-seen level. One played, you’ll have the option to rate the level and then save it to your system… or not. What this feature adds to the game can’t be understated, and may very well be the reason it’s worth not only your time and money, but is one of the few games that makes its predecessor obsolete.

Unlike Dale, I don’t take issue with the game’s visuals or sound. The presentation does what it needs to allow you to get into the action, and I found the game’s character blocks (or is it “blox”?) absolutely adorable. The game’s soundtrack is indeed the casino plinks and bloops that Dale describes, but they never truly get grating, particularly when you’re likely to be shouting at your friends over most of the game’s sounds.

Addictive and inherently fun (knocking stuff over never really gets old, does it?), Boom Blox Bash Party is a must-have for your Wii collection. The only question now is, how much trade in credit will you get for the original now that the new model’s rendered it outdated?

Final Score: 9 — Superb (9s are a hallmark of excellence. There may be flaws, but they are negligible and won’t cause massive damage to what is a supreme title.)