When I read the “word” BlazBlue, I immediately hear Bill Cosby in my head babbling a “Blazem Blazblue Blippity BLOP.” Did Bill Cosby ever actually say anything like that, or is that something we just believe due to the antics of his many impersonators? There are still so many Bill Cosby impersonators in the world; the mind reels at the sheer magnitude of their shared irrelevance. I wonder how many of them have taken to diversifying their special talent into impersonating Barack Obama? There is likely to be a lot more money in that pursuit, as Cosby hasn’t had much cultural relevance in the past twenty years or so, and Obama’s like, totally the president and stuff.

BlazBlue ventures to bring us an all new, anime-inspired fighting game, and it pretty much nails it. There are a few things about the game that feel a little insincere or unpolished, but for the most part, the game follows through on the promise of a fresh, fun, new 2D fighter.

Though this is the first game in what is sure to be a series, you’d never know it from the game’s story. BlazBlue features twelve playable characters who seem like they’ve known each other for years. Making sense of the game’s plot is like starting in on the fifth year of a long running anime series with no recap of seasons one through four to guide you. That’s OK though, the fact that you don’t always know what’s going on is part of the fun, as it keeps things unpredictable and surprising. From what I can tell, the story centers around a time machine which produces a sexy robot girl who may or may not be a doomsday device. She mostly acts like a robot, unless she’s near a maybe-demon-man. She loves the maybe-demon-man, which brings out the school girl in her, despite the fact that he seems to have forgotten she ever existed. The robot girl isn’t the only one interested in the demon man. He’s being hunted by some guy who can shoot ice swords out of his hands, who knows Alucard’s blond, pouty daughter, who has a rivalry with a young boy who can control a giant puppet woman-thing. 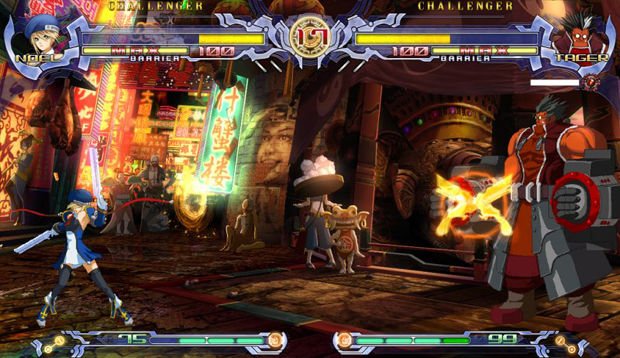 There’s definitely a charm to the games endlessly imaginative, sometimes nonsensical world. Sadly, the game’s character designs aren’t always as creative. The game’s cast is a weird mix of cliche’s (red coated bounty hunter with a dark side, big boobed girl in red dress) and interesting re-imaginings of otherwise tired anime archetypes. The game features a spunky cat-girl, but unlike most of her type, she wears a creepy hood and remains fully clothed for the entire game: a first in cat-girl history. Bonus points also go to Rachel, Alucard’s daughter, who fights with a giant, cat shaped umbrella that actually turns into a Totoro-looking cat from time to time. The Miyazaki influence doesn’t end there. BlazBlue also features a pretty fun take on Spirited Away’s No-Face. He’s name is Arakune, and while he never eats a frog whole or vomits the contents of an entire bathhouse onto an old woman, everything else about him is pretty much pure No-Face.

The game’s character designs may range from familiar to downright thievery, but that doesn’t take away from how great they all look in motion. Though BlazBlue doesn’t look quite as amazing as Street Fighter 3 or King of Fighters XII, it comes pretty damn close. The animation is extremely smooth, especially seeing as these sprites are high res. The jerky, fumbling movements found in Super Street Fighter 2 HD proved that HD sprites are a lot more challenging to effectively animate than their SD forefathers. To make an HD sprite move smoothly takes a lot more frames of animation than with a pixelated sprite, and on that front, BlazBlue delivers. 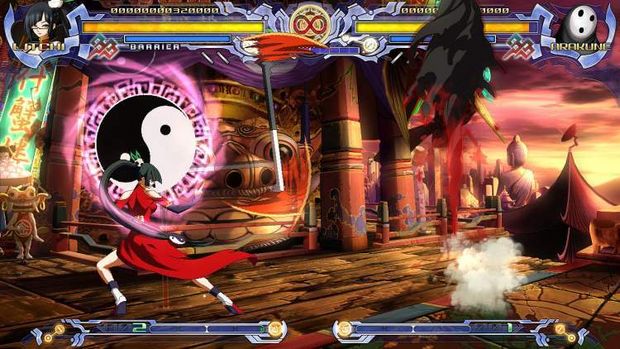 As for the gameplay, BlazBlue takes a lot of interesting risks. Like Guilty Gear before it, the game has a lot more in common with the anything-goes, supernatural martial arts of the Darkstalkers series than it does Street Fighter 2 or other more conventional fighters. Gladly, there are no immediately familiar shotokan-style characters for Capcom fighting-purists to pick up and overuse. To play BlazBlue well, you will have to learn the game from scratch.

BlazBlue features four attack buttons, but only three are used for “normal” attacks. The fourth is used for “drive” attacks, which deliver character specific moves that are often central to said character’s fighting style. Rachel (Alucard’s daughter) has a drive attack that isn’t an attack at all. Hitting the drive button and the controller in unison will cause the wind to blow in that direction, which can blow away projectile attacks, blow down an airborne attacker, or blow Rachel up into the air, potentially out of harms way. Arakune (the No-Face thing) has a drive attack that curses his opponent, with surprising, insect infested effects. Litchi (the red dressed cleavage show-off) has a drive attack reminiscent of Donovan’s kill shred antics from Darkstalkers. It’s little touches like that combined with the easy chain combo system, the many supernatural or otherwise unreal attacks, fast pace, and truly bizarre character roster that make BlazBlue feel like a new Darkstalkers game. 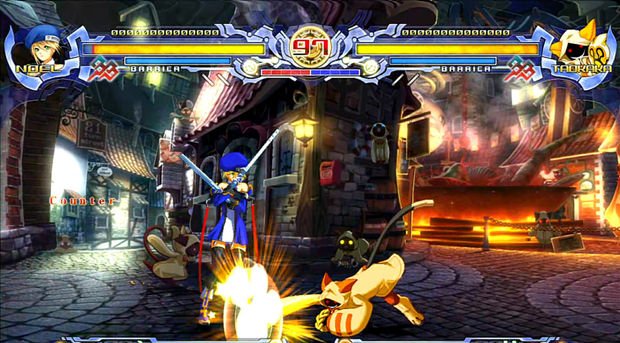 Adding to the games accessibility of the “east operation” are controls that come standard to every match. If buttons and quarter circle motions aren’t your thing, every special attack in the game can be done with a small flick of the left analog stick. Personally, I never understood the purpose of easy operations options, as the technique and timing necessary to play your average fighter goes far beyond the skill needed to perform basic joystick/button combinations, but if you’re one of the few that likes 2d fighters but hates “down/down-forward/forward +punch,” BlazBlue has you covered.

So, what’s not to like about BlazBlue? Well, though it’s excusable that the roster is small, seeing as this is a whole new franchise, it has to be noted that there aren’t as many characters here as in Street Fighter 4 or the upcoming KoF XII. The characters that are here all play vastly differently from each other, which arguably makes up for the relatively small selection. There is no Ryu/Ken/Akuma/Dan/Sakura play-a-likes here, but still twelve characters is smaller than average. 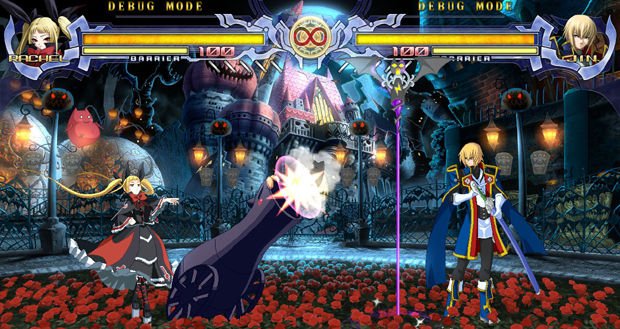 The game’s story mode is also really low budget. It’s fully voice acted, with intentionally and unintentionally laughable results, but beyond that, it’s pretty cheaply produced. Static images of the game’s characters standing talking to each other for many minutes is all you get for cinemas, and they are generally long and boring. They feel like Metal Gear Solid codec conversations, except even more uneventful. You can’t skip them first time through, but after that you can, which helps things a bit (thanks for the correction, commenters!). There are multiple paths and choices to go down in story mode, which does a little to make the mode feel more cared about, but not much.

My final gripe related to story mode, but involves the game as a whole, is the lack of single player replay value. The game lacks the unlockables and challenge modes needed in a modern fighter to keep it interesting for the soloist. There are four alternate versions of regular characters to unlock (though they look exactly the same) and the story mode to sit through, and that’s pretty much it. There is a replay mode used to record matches you’re particularly proud of, but it will only appeal to those who love to show off big combos. The game’s devs would have done well to include a beat ’em up mode like those found in Super Smash Bros. Brawl or Guilty Gear Isuka, just to give lonely, offline fans or 2D fighter fans an excuse to keep playing the game after arcade mode is over. 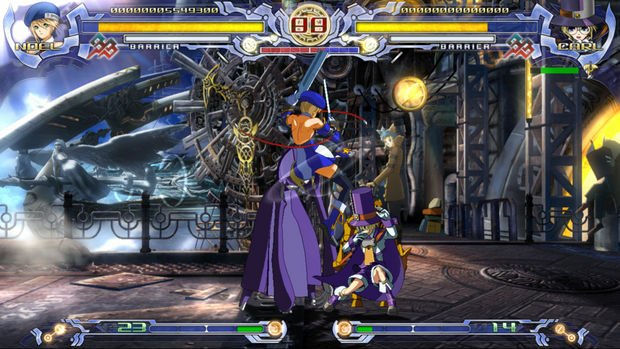 BlazBlue‘s limited edition is already sold out across the country, and the same thing may happen to the standard edition to be put on sale later this month. The game is already a hit, and it deserves it. Still, BlazBlue isn’t quite up there with my favorite 2D fighters. The sometimes cliche’ character designs, cumbersome story mode, small roster, and limited single player modes keep the game from being truly “top tier.” That said, it’s still a more interesting and provocative game than most current-gen fighters, as it doesn’t rely on variations of the game overused characters and gameplay mechanics we’ve seen for over ten years (I’m looking at you, Street Fighter IV). The fact that BlazBlue‘s combat system feels so original is quite an achievement. Add a high level of accessibility, solid online play, and beautifully detailed animation, and you have a must buy for any fans of hand drawn, 2D fighters.

Score: 8.0 – Great (8s are impressive efforts with a few noticeable problems holding them back. Won’t astound everyone, but is worth your time and cash.)