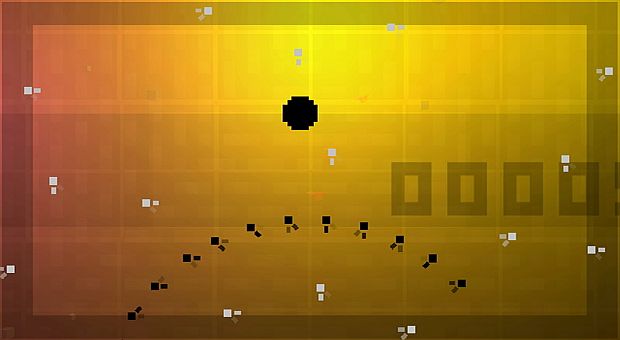 Fans of BIT.TRIP Beat and BIT.TRIP Core will be thrilled to hear that the development team at Gaijin Games has been hard at work on a third game in the BIT.TRIP series called BIT.TRIP Void. While the game is called BIT.TRIP Void, there are many things that occupy the space in this game that many people will find interesting and entertaining. Things such as the new gameplay style, the classic retro look, a new chiptune soundtrack, new challenges and the return of the multiplayer mode.

Hit the jump for my full review of the game.

Collect enough black dots and your void will grow and make it harder to dodge white dots, but the risk you take in amassing your void will reward the player with more points by increasing their point multiplier. Miss enough black dots or hit enough white dots and your life bar will drain and you will get sent to the colorless nether world. While this game sounds simple on paper, once the game gets going, you will see some crazy bullet-hell like patterns that will even challenge the most seasoned gamer.

In order to maneuver through those tight patterns, the game uses a choice of either the classic controller or the combination of a nunchuk and wii remote controller. The analog stick moves the void around while using the A or Z buttons will pop the void, causing it to shrink in size. Using these controls, you should technically be able to avoid anything the game throws at you.

So now that we know how the game plays, let’s get to what makes this game an enjoyable experience. The boss battles in the game are something that has been a unique experience in the series. In BIT.TRIP Beat you had a boss in one of the stages that was like playing against an opponent in the old classic game, Pong, except your opponent was the one throwing the pong balls at you. The boss battles in this game are presented in a way that resembles a mini-game based on a classic retro gameplay style. For example, the first stage boss has you avoiding obstacles that are speeding towards you like in the old classic game, Spy Hunter. It even shifts the view point from a horizontal style to a vertical style where the bullets are coming down from the top of the screen instead of the left side of the screen. If you enjoyed the boss battles in the previous games, BIT.TRIP Void will not disappoint in that category.

The music in this game is great and never skips a beat, even when you start losing during the level. One of the best things about the music is the guest compositions by Nullsleep, an artist that has been in the chiptune scene for a long time and has made many contributions to the chiptune scene via his website, 8bitpeoples. The music and sound effects work with the events in the game like it did in the previous games.

Take for example when you shrink the void, the sound that it makes is in time with the rhythm of the music. There is a sense of rhythm in the gameplay, but it is not as prominent as it was in BIT.TRIP Core. It is more transparent like in the Dreamcast classic, Rez. The music and the beats flow with the events on screen, but they only enhance the experience the player has with the game and is not necessarily required to perform well in the game.

The way the game’s interface is presented is interesting in the sense that when you look at it, you might see something scroll by in the background indicating combo, score, or even an extra life (credit +1), which I thought was a real creative way to create an atmosphere where the player can see their status and at the same time, not break the focus of the player by having them look away from the action on screen in order to see the important information that is presented to them. The other thing to note about the interface is how colorful everything is. There are parts of a stage where you might have a brown to orange color gradient while another will have a solid purple color with lighter shades fading in and out of the background.

Going over another BIT.TRIP  staple is the challenge modes that are present throughout the game. In BIT.TRIP Void, there are challenges spread out during certain parts of the stages. The experience that I had with the first challenge was to navigate a simple maze constructed of black and white dots involving a sequence of moving up or down the maze. The twist was that the controls for up and down were inverted for the challenge and it created a sense of surprise when I discovered it.

The multiplayer mode in this game is pretty much the same as it was in the other BIT.TRIP games. All players share a single life bar and control their own void. The voids are marked with a small number indicating player number, so there is no confusion over where each player is located on the screen. While the multiplayer mode is fun, it does get a bit chaotic in certain points during the game and that is where communicating with your team definitely helps a lot. With this, you can see the developers wanted to emphasize a certain team atmosphere when there is more than a single person playing the game.

After playing BIT.TRIP Void, I felt that this is a solid entry to the BIT.TRIP series. The game excels at creating an atmosphere where you may find yourself “zoning out” during a heated session of the game by integrating great music, simple, yet effective gameplay, and a unique graphical style. The point that I am trying to make here is that whether or not if you have heard of the BIT.TRIP series, this is a great game that will entrance and entertain Wii owners of all ages.