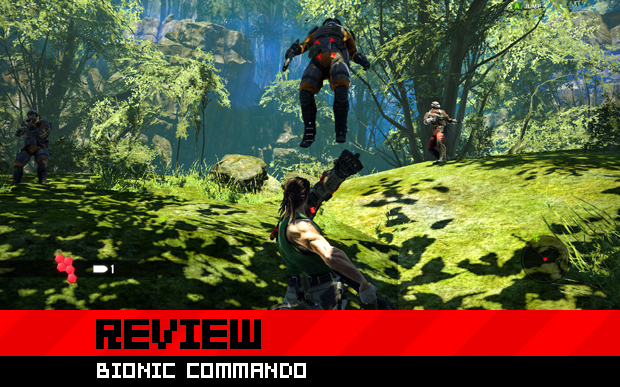 Bionic Commando is a game I think very few of us ever saw coming. Sure, the NES game is a classic and very popular with American audiences but it had been so long that it was hard to imagine a follow-up would ever occur. Due to the efforts of Ben Judd, producer, this beloved franchise is being launched headlong into the modern age of gaming.

I’ve been anticipating this game for a very long time. Was it worth the wait? Umm… well, hit the jump and we’ll talk about it, mmkay?

The new, edgier Bionic Commando begins many years after Nathan “Rad” Spencer stopped the Imperial Army from reviving their former leader, Master D. In the aftermath of the war, Spencer and other soldiers using bionic limbs were hailed as heroes for a time. Soon, public opinion shifted and these “Bionics” became feared as the dangerous weapons they were. Laws were passed which required Bionics to relinquish their limbs, leading to a conflict between those who support the Bionics and the government which has oppressed them.

Spencer has been held in prison all these years, which has caused his red hair to fade and become dreadlocks. Kidding aside, he’s become a stereotypical, gritty action hero. Called back into duty by the government which shunned him and baited with information on his missing wife, Nathan must once again wield his bionic arm to take down a pro-Bionics terrorist group which has attacked a city.

It’s an interesting setting with some great potential, all of which winds up squandered. The story, such as it is, plods along with very little development and inexplicably shifts gears about halfway through. Characters are not given the opportunity to be shaped into people you care about with most dialogue boiling down to giving directions or Spencer asking about his lost wife. As a result, plot twists fall flat and the climactic battle feels not unlike every other fight you’ve engaged in.

This points to another issue I take with the game: Combat sucks. It’s just boring. Nathan can carry two guns at a time. His basic pistol is a semi-automatic. Secondary weapons include a shotgun, grenade launcher, machine gun and multi-targeting rocket launcher. The aiming reticule is quite large on all the weapons, even when zooming in a bit to gain greater accuracy, so it can be hard to tell if you’re going to hit a guy unless you’re right on top of him.

Certain enemies will go down more easily by making use of the bionic arm attacks, such as grabbing enemies and throwing them or using the line to slam into their chests. All of the arm-based attacks are kind of fun for the first hour or so of gameplay. It soon becomes a tedious affair.

One good idea that comes out of the combat is an experience system. As you acquire weapons and new abilities for your arm, challenges become available. These can be as simple as killing a certain number of enemies with a specific weapon or more complicated tasks like taking out guys while swinging. As you complete challenges, your weapons level up to do more damage or hold more ammunition. This would be great if the combat were enjoyable but, since it isn’t, they become forgettable. Thankfully, these challenges are completely optional.

In terms of gameplay, the only thing that really works well is the swinging mechanic. While it’s true that the onus is on the player to make sure that they’re targeting something they can actually grab with the arm, the game offers a lot of support in this regard. Simply holding down the Wire Action button will eventually cause Nathan to grab something, provided any objects get into range of the arm, and the auto-aim is really forgiving. It takes a little bit of getting used to but is very accessible.

Swinging is exhilerating and it’s very satisfying when you’ve managed to cover a great distance by grappeling a lengthy sequence of objects. But the level design can be frustrating at times as it’s a totally linear game with a distinct path that the player is to follow. There are two very obvious conceits which contribute to this, one of which makes sense in the context of the game and another that gives the impression that not a lot of time was spent really thinking things through.

The first is water, which crops up in a lot of areas. Because Nathan has a giant metal arm attached to his torso, it only stands to reason that falling into a body of water would make him sink like, well, a guy with over a hundred pounds of metal grafted to his body. There is a brief period of time in which you can save yourself by trying to grappel something above the surface but it can be very hard to accomplish. The water is nearly opaque for some reason and it’s almost impossible to even see solid ground to latch onto.

The other environmental restriction is the massive amounts of radiation flooding the bombed city. According to Super Joe — Nathan’s commander — bionics are “very sensitive to radiation.” That’s about all the explanation we ever get about it and it feels really lazy It doesn’t even make sense. How is it, exactly, that there are such disparate, seemingly arbitrary pockets of radiation creating these paths that are safe to traverse?

Regardless of how stupid the whole thing is, the effects on gameplay are quite simple. If you venture near the edge of the playable area, you’ll get a little radiation warning. Step further out of bounds and a klaxon wails, the screen starts flashing and you begin to die very quickly. In addition, some surfaces are covered in radiation because radiation is apparently not unlike ivy or a million other things that could prevent someone from getting a good grip on a surface which would make some honest sense.

The single-player might not be fantastic, but it’s a shining star compared to the tacked-on multiplayer component. Online games consist of Deathmatch, Team Deathmatch and Capture the Flag in a variety of maps. You know, just like damn near every multiplayer game in existence. And, since the combat isn’t particularly fun, there really isn’t any reason to play the multiplayer at all.

This is a tragedy, as the unique gameplay aspect of the arm could have lent itself to some really creative and fun competitive modes. A mode, for example, where players must try to collect as many randomly appearing items as possible could be a ton of fun. Or how about a race mode where players swing along a course to reach the finish line (which could really work because the guy at greatest risk of being shot is the one in front — the guy whose back everyone can see). It’s a staggering waste of potential.

In fact, that summarizes Bionic Commando as a whole. It isn’t what I would call a bad game but it’s far from being a good one and the possibilities for it being great went unrealized. It’s worth checking out to play with the swing mechanics and to see the game’s impressive visuals but I wouldn’t recommend wasting more than a few hours on it and can’t encourage anyone to pay retail price for the opportunity.