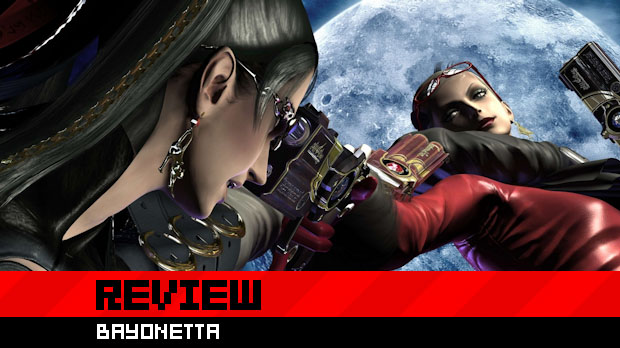 How can one accurately describe Bayonetta? The truth is, one can’t, and that makes starting a review very difficult indeed. You could list any number of adjectives that partially describe the experience: hilarious, stupid, sexy, clever, deep, frustrating, sleek, satisfying, surprising, confusing; the list of words goes on and on and on. Trying to fit the entire experience into one coherent sentence, though — therein lies the trick.

Bayonetta has finally hit store shelves after months of waiting, salivating and claiming that the main character’s head is too small for her body. Having taunted, tortured and Witch Timed our way through the game’s campaign, the time has come to finally see if all the hype has been worth it.

Read on as we review Bayonetta. Bring a spare pair of underpants. 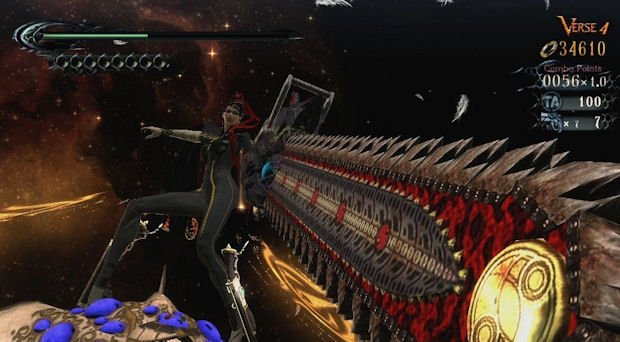 I can’t honestly tell you what Bayonetta is about, exactly, because I still don’t know. It has something to do with a war between angels and demons and a witch who is flipping around and beating the crap out of everything with her guns and swords. Kind of like Constantine meets The Matrix. I’m not entirely sure the story is even meant to make sense, as most of the cutscenes exist purely to show off ridiculous fight scenes and shameless crotch shots.

Players take on the role of titular heroine Bayonetta, a seductive witch with an English accent who destroys angels for a living. In being hounded by the forces of Heaven, Bayonetta finds herself on the wrong side of a fellow witch called Jeanne who knows something about her forgotten past, and the journalist Luka who wants to expose witchcraft to the world. Cue lots of explosions, monsters with upside-down baby heads, and even more crotch shots.

Despite not making a lick of sense, Bayonetta is a very funny game. Slapstick humor, sneaky videogame references and incredibly silly characters make for a highly memorable and laugh-out-loud affair. I was giggling before the first chapter had even finished, which is more than can be said for most games that try so hard to be hilarious. Bayonetta is genuinely amusing, if not for the mockery of games like Resident Evil 4 and references to Fantasy Zone, then for the simple pleasure of watching a demon dog made out of hair eat an evil angel. 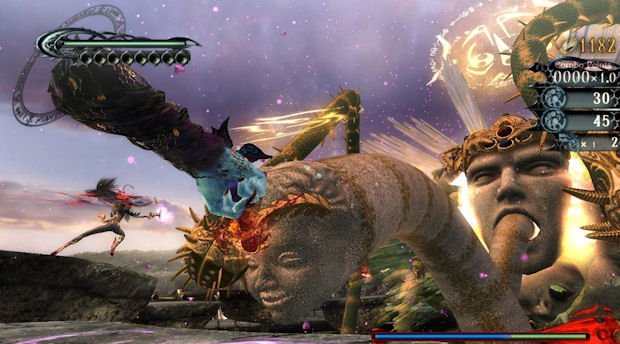 Bayonetta isn’t just an endless stream of fan service interspersed with self-referential humor, however. The game justifies its silliness with an incredibly intense action experience that manages to be more like Devil May Cry than Devil May Cry itself has been for years. The sheer chaos that is Bayonetta‘s combat system never lets up for a second, as Platinum weds mindless button mashing to a surprisingly intuitive cat-and-mouse ballet of acrobatics and counter attacks.

The trick is in the dodging. Players can dodge enemy attacks with a press of the right trigger, and if Bayonetta evades the attack at the optimal moment, she will trigger “Witch Time.” Time will slow down and enemies will forced to a standstill, allowing Bayonetta to launch a full assault on the angel of her choice without fear of reprisal for several seconds. Witch Time is meant to be abused, and players will find themselves in dire need of it as the game progresses and gets more challenging.

Commendation must also be reserved for the combo system. Using the B and Y buttons, as well as directional input and shoulder button presses, Bayonetta has been designed so that any combination of buttons will lead to the main character doing something awesome. Simply mashing the buttons randomly will lead to Bayonetta summoning giant boots or fists made out of hair, or grabbing an enemy to “punish” them with pistol whips or ground pounds. 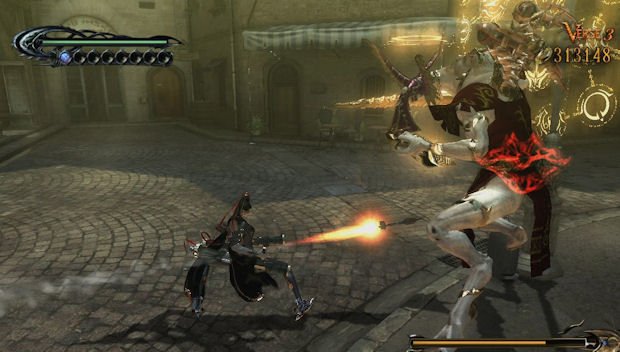 As Bayonetta racks up attacks without getting hit, she builds magic power. When the magic meter is full, players can press the Y and B buttons together near an enemy to pull off a devastating “Torture Attack.” These special finishers change in accordance with the enemy and Bayonetta’s position, but each one is sadistic, gory, and thoroughly ridiculous. Whether she’s trapping angels in guillotines and kicking their exposed posteriors or tying up overtly sexual female opponents in chains so tight that their breasts pop out with a funny noise, Bayonetta manages to make an already silly game even more nonsensical with her range of deadly attacks.

In addition to her four guns (two in her hands, two strapped to her legs), Bayonetta will get access to more weapons and accessories by shopping the “Gates of Hell.” Halos gathered from enemies act as in-game currency, and one can also find a number of LPs that Bayonetta’s friend Rodin can turn into new combat gear. The weapons look cool and have some neat attacks, but they often don’t feel as good to use as Bayonetta’s standard weapons and tend to come up short in the cool combo department. The same can be said for the new techniques that can also be bought, many of which just seem to make Bayonetta more prone to attack. 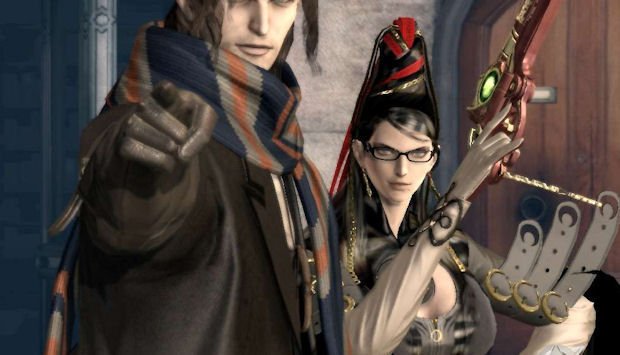 On the whole, combat is surprisingly deep, and the balance between attacking and dodging has been crafted expertly. However, almost predictably for a game of this nature, Bayonetta‘s charms have a tendency to wear thin after prolonged exposure, especially when the game starts to get more challenging. The dodging and hammering of buttons can get pretty exhausting, not to mention the fact that one can grow desensitized to the over-the-top nature of the game after about an hour of playtime.

This isn’t helped by the fact that Bayonetta can get very frustrating as it progresses. Even though dodging is an essential component to the game, the game becomes so chaotic that it’s sometimes impossible to tell where attacks are coming from. Later enemies move at lightning speed and often have attacks that aren’t telegraphed efficiently. They also tend to shrug off Bayonetta’s attacks outside of Witch Time, yet her own combos can be broken easily. While Bayonetta is surprisingly forgiving for a game of this nature, players are graded at the end of each fight and stage on completion time, number of deaths, items used and damage taken, and it can be annoying to get graded poorly simply because the screen was full of too much information for the human eye to process, or they were ambushed by one of Bayonetta‘s weird and random QTEs. 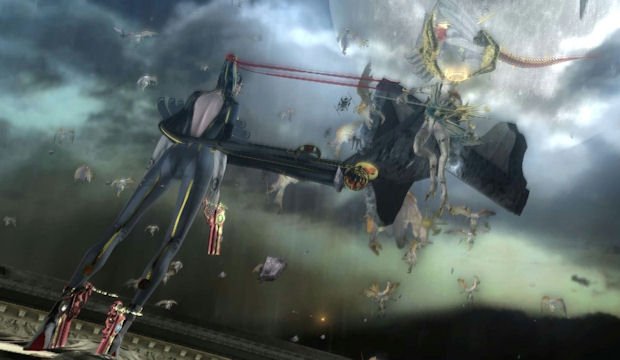 There are also some ill-advised minigame sections. Angel Attack is a shooting range sub-game that appears between levels and is not only quite bland, but frequently irritating after the tenth time. Some of the stages have interesting minigames with some very funny retro nods to past Sega games, but the major problem is that they go on for far too long and the joke soon stops being funny. That is a major problem for Bayonetta — the laughs are frequent, but they can really drag on sometimes.

To its credit, the game looks terrific, which is helped in no small part to the rather saucy animations of Bayonetta herself. The art direction is amazing as well, with the enemies looking angelic and holy, yet thoroughly monstrous at the same time. Some of the designs are absolutely freaky, especially the range of huge and grotesque bosses that seem to pop up every few minutes. The voice acting is also pretty superb, despite the sometimes cringe-worthy dialogue, and the jazz music that makes up the majority of the game’s soundtrack is rather brilliant as well. 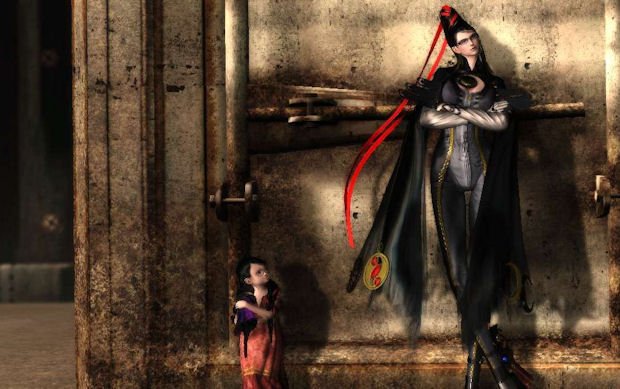 Ultimately, Bayonetta is a great game that fans of hardcore Japanese action games should be incredibly satisfied with. It looks amazing and can feel great to play when combos are rolling, Torture Attacks are earned and giant demons made out of hair are summoned to crush bosses. However, the pace-killing minigames and the frustrating nature of the chaotic combat hold it back from being a truly superb title. Definitely recommended playing for all fans of the genre, despite the few flaws keeping it down.

Oh, and did I mention how sexy it is?