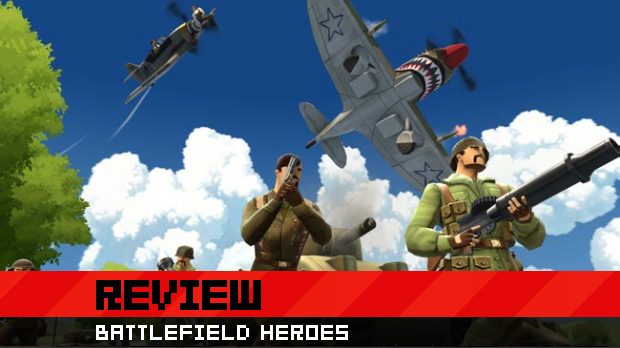 Is it just me, or did Battlefield Heroes‘ release yesterday come seemingly out of nowhere? A few months ago, I couldn’t turn around without seeing an interview or a news story about the open beta. Then, nothing. Then, with almost no fanfare or immediate pre-release hype, it spontaneously becomes available for free download.

In case you haven’t been following it, Heroes is a fully featured cross between classic Battlefield 1942 gameplay (complete with control points, planes, and Nazis) and the free-to-play, microtransaction-based structure of  titles such as Maple Story. You can download the entire game for free from the official site, but you’ll have to shell out a few dollars if you want your character to look more distinctive than the other grunts running around in Heroes‘ zany, cartoonish version of World War II.

But does it work? Does the free-to-play structure and emphasis on persistent, RPG-like character building work harmoniously with the original Battlefield gameplay?

Hit the jump for my personal answers to those questions.

Battlefield Heroes is based on an awfully compelling concept: it seeks to merge the grindy, microtransaction-driven addictiveness of games like Maple Story with the considerably deeper and faster-paced action provided by the Battlefield franchise.

Unfortunately, it doesn’t work as well as it could.

The numerous abilities available for the three classes, each with the capacity to be upgraded five times, implied a depth of gameplay that would keep me enthralled for weeks. The temporary nature of the buyable items (health recharges have to be purchased, all weapons last less than a month, and all cosmetic items last a month unless you pay three times their initial price to permanently own them) suggested I would need to keep coming back to it over the next few months. The classic Battlefield gameplay revolving around capturing control points and depleting the opposing team’s respawn tickets seemed warm, inviting. An hour after first booting up Heroes, I was fully prepared to devote a hefty chunk of time to plumbing its depths.

My first character, a Commando (basically a cross between a sniper and a spy), was pretty satisfying. Characters earn Valor Points and experience points by dealing damage or capturing flags, which results in a feeling of constant reward. Did you shoot a guy once in the leg, only to have him turn around and annihilate you with five shotgun blasts? Don’t sweat it — you still got some XP and cash. Even though I sucked for the first ten minutes of my first game, I still felt like I was constantly building my character and reaping rewards from my own ineptitude. In a few minutes, I had enough Valor Points to try out two new weapons, each far more useful than my default guns. I felt progressively more powerful with every new ability I earned. Things were good.

It takes a while for Heroes‘ flaws to make themselves apparent, but they’re impossible to ignore once they do. Even though there are only three classes, for instance, the Commandos still feel irritatingly overpowered. Their sniper rifles do incredible damage, they can remain permanently invisible to anyone more than a few feet away from them, and they seem to move faster than the other two classes.

Or what about the fact that you cannot switch teams or classes during a game? When creating a character, whatever faction and character class you choose for him are his for life. Initially, this makes sense: the beauty of RPG-esque character building is that for all the experience points and ability points and cash you sink into the guy, he’s yours. That character is a permanent symbol of all the time you put into the game; he’s a walking testament to your efforts. But in a multiplayer combat game, it’s not enough to just enter a server with a fixed character and assume things will be all right.

What if you find that your entire team is made up of Soldiers, but you need some Commandos to take out a guard post? In any other game, you’d simply switch classes, take the guard post yourself, and switch back. Or, what if one team is slaughtering the other team simply because they’ve got better players? In a regular multiplayer shooter, the teams would automatically rebalance in order to make things fair.  In Heroes, you’re locked into the same team configurations no matter what, unless a huge number of people leave and are replaced by new people. This almost entirely reduces any possibility for cooperative, strategic gameplay, especially when you consider the fact that a lot of players seem like they’re just out to get as many XP and Valor Points as they can, the rest of the team be damned.

The game constantly struggles with satisfying both the needs of a persistent, stat-based RPG and those of a compelling multiplayer shooter without ever combining them into a coheisve whole. For instance, players take a metric asston of damage before dying, because that way you can score lots of experience and valor points by blasting away at them. After a few hours of play, however, the seeming ineffectiveness of every machine gun or explosive begins to get frustrating and tedious. I threw three grenades at a Gunner, then shot him four times with a shotgun, and watched in furious horror as he killed me with less than ten HP left.

There are planes, because this is a Battlefield game, but all the control points are surrounded by buildings or trees (perhaps to force players in close proximity to one another so they can pick away at one another with close range weaponry and get a ton of points), thus making the planes effectively useless except as a means of transportation.

There are only three maps with more presumably on the way in order to keep players coming back on a quasiregular basis, constantly eyeing the new gestures and clothing items in the shop, forever tempted to open their wallets and engage the microtransaction model head-on. But these maps become downright boring after a few hours of play, and even the satisfying XP system and legitimately interesting abilities (like a Soldier powerup which makes your SMG fire incendiary rounds for a limited time, or a Gunner perk that allows you to eat all nearby explosives and convert them into health) can’t save the core gameplay from degenerating into unfortunate tedium after you’ve experimented with each class and their different weapons.

On a slightly different note, I want to discuss one aspect of Heroes‘ microtransaction system.There’s some legitimate concern to be had over the game’s buyable XP “widgets” that, for a few real-life dollars, will double the amount of XP or Valor Points you get while playing for a certain period of time. One could rightfully claim that such an item rewards those players with deep pockets over those who rely on personal skill. As it turns out, however, it never really felt like an issue to me. I felt very little compulsion to keep playing the game after sufficiently experimenting with all three characters, and I subsequently just didn’t have time to get frustrated that some dude was earning twice as much XP as I was just because he plopped down a few extra bucks. The game gets dull far beforesuch larger questions of paying money for character power have the chance to become relevant.

However, the game’s replayability may definitely become more of an issue as time goes on. When newer, cooler weapons and items start popping up in the shop, and more varied maps become available, perhaps the cash-for-levels system will become a legitimate issue. This will also mean, however, that the actual act of playing the game will become a much more varied, enjoyable, and longterm experience than it currently is — a fair trade, perhaps.

Opinions are divided on Battlefield Heroes‘ revenue format, but I was honestly hoping the whole microtransaction structure would work to its favor. An ideal version of Heroes would be as consistently addictive and intrinsically satisfying as a mindless grindfest like Maple Story, while still providing actual depth and intelligence provided by its essential FPS gameplay. As it stands, however, the game we’ve been presented with works against itself more often than it does not. Perhaps the inevitable flood of subsequent map, weapon and shop updates will provide more depth and replayability, but the I also fear the design may possess some intrinsic contradictions that no patch can fix. Battlefield Heroes is a highly recommended download if only because it is both free and a total blast for the first few hours, but you might be surprised at just how quick and easy it is to fall out of love with it.