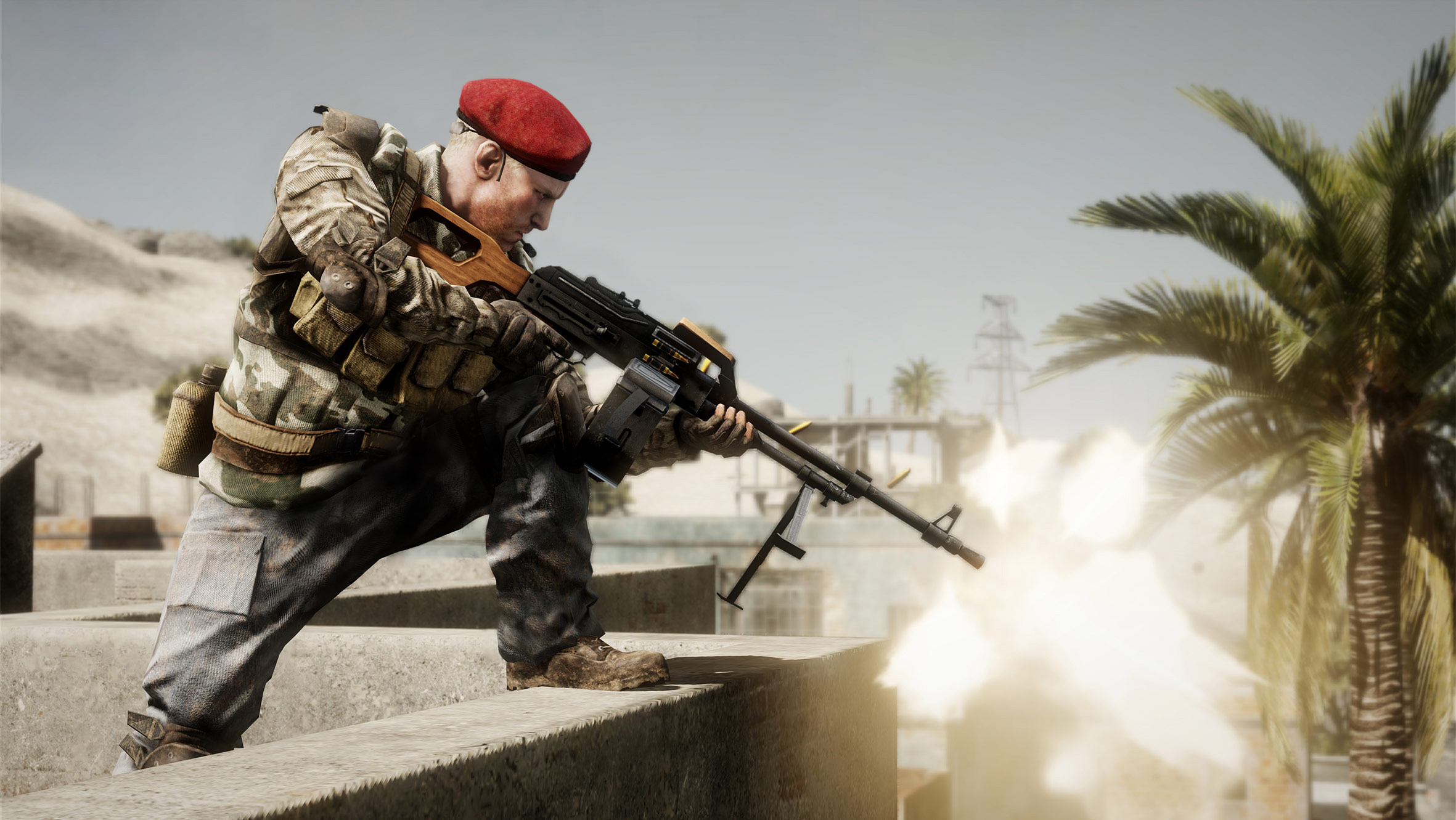 For a few reasons, more people are flocking towards EA DICE and Battlefield: Bad Company 2 than ever showed up to cheer on the original Bad Company. The big factor, as far as I can tell, directly relates to a certain other big-name first-person shooter losing a portion of its following because of some sketchy decisions that were made.

More importantly, Bad Company 2 looked promising from the moment we caught our very first glimpse. That’s what it’s really about; forget the politics, just this once. Most of us played either the demo or the beta and realized, hey, this pretty much lives up to our expectations. Imagine that!

Of course, there is a reason why the single-player hasn’t been mentioned much. You’ll find out what I’m talking about in a few seconds, if you’d kindly continue reading past the break. 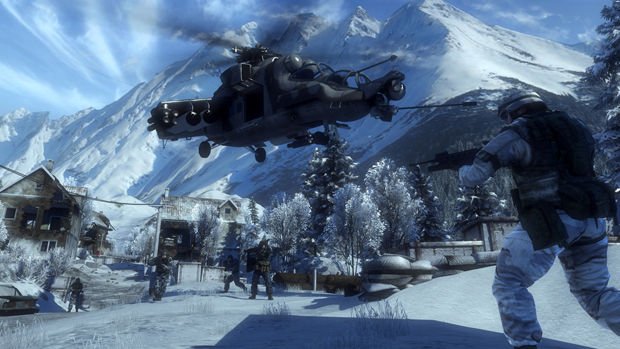 Where do you begin when talking about a game like Battlefield: Bad Company 2? Its rather traditional first-person shooter single-player campaign, or the part everyone seems to truly play it for, the multiplayer component? Let me rephrase that. Which do you want first — the good news, or the bad?

Bad Company 2 starts off rather unpredictably. A part of me doesn’t want to spoil it, but my other half thinks it would be unfair to pass on talking about one of the few great story moments. Without going into much detail, let’s just say the entire introductory level takes place during World War II. Even as someone who openly hates on WWII-era shooters, I legitimately enjoyed the prologue; DICE makes it work, against all odds.

Of course, they didn’t randomly include this opening segment for no reason — it ties into the modern-day story, which has Russia and the United States in conflict. For anyone who’s played Modern Warfare 2 (look, I made it this far before dropping those words!), think less insane moments. Somehow, Bad Company 2, even with its lighthearted approach to war in today’s day and age, feels more grounded in reality. 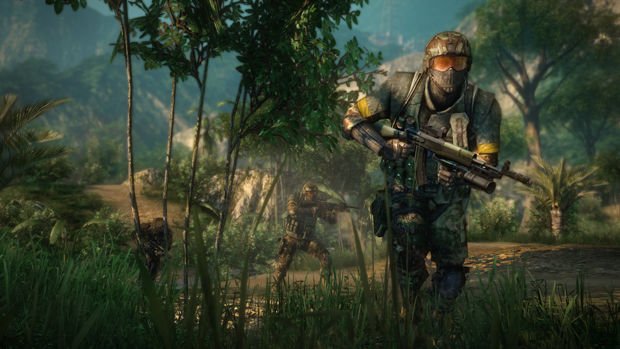 Now, here’s where we get to the not-so-nice parts. The story itself is admittedly one-dimensional. You’ll often find yourself wondering what your motivation for fighting really is. This is made slightly less apparent by the funny dialogue (we’re talking “videogame funny,” here) in cut scenes and during the in-game action.

Even though the campaign is oh, a good eight hours long — depending on how badly the often annoyingly located checkpoints screw you over — and the locales are mixed up at a pretty decent rate, it’s simply not enough. Genuinely cool action sequences are too few and far between. It all feels like an episode of the A-Team that drags on just a bit too long.

What’s weird about the story — well, this is a Battlefield game, so maybe not — is how much everything except for the prologue and the final moments feels like an afterthought. I get the immediate impression that DICE was focused solely on providing a stellar multiplayer experience, and then tended to the single-player portion on occasion. If nothing else, this is what you should take away from my review. Sorry, single-player guys, but this one isn’t going to do much for you. 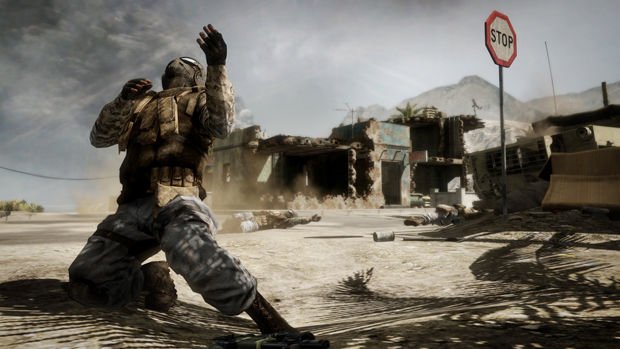 Alright, you still here? Apologies if the beginning portion scared you off; it gets better, trust me. Without a doubt, Bad Company 2‘s multiplayer is enough of a reason to be interested in the game. Simply put, it’s phenomenal. Even if, like me, you are relatively new to the series (I’ve only played Battlefield 1943), you need to get in on this fun.

Apart from the story’s nicely written main characters and the wonderful orchestral work done by Mikael Karlsson, every good element from the single-player can be found in multiplayer — and more often than not, it’s implemented better. The best example of this is the destructible environments.

No, the destruction in Bad Company 2 is not the greatest we’ve seen in videogames. But as far as multiplayer shooters go, the level of depth is great enough to impact the way other players behave, and hopefully, the way you react; otherwise, you won’t last long at all. If you aren’t blowing open a wall to get the jump on an enemy player who is destroying your M-COM station, you’re doing it wrong. Unfortunately, this urgency is never really stressed throughout the single-player enough to feel significant. 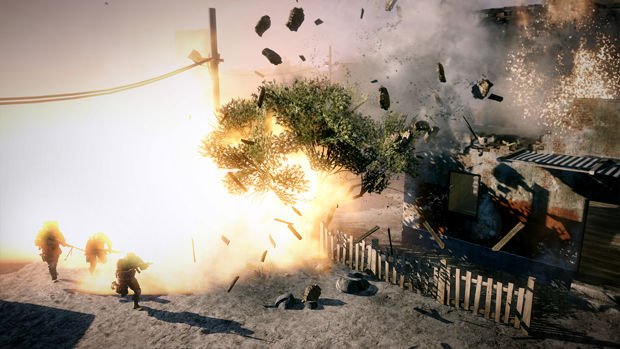 As for the sound design, the mere fact that I’m talking about it in depth should prove to you how tremendous it is. Usually an afterthought when it comes to reviews, I’d be a fool to not make mention of it. For once, firing a gun sounds like it should — immensely loud and satisfying.

With or without surround sound, you get a true sense of where in the map the firefights are taking place. Hearing shots way out in the distance is not only a neat audio effect, it’s also super helpful.

Like all good multiplayer shooters, Bad Company 2 has plenty to keep you interested in grinding away at battle after battle. While the three main modes — Rush, Conquest, and Squad Deathmatch (along with the GameStop-exclusive Squad Rush) — seemingly never get old, you better believe there’s XP and unlockables to incentivize steady participation.

There are four distinct classes to pick from (Assault, Engineer, Recon, and Medic), each with their own class-specific weapons and abilities. Thankfully, there are also plenty of non-class-specific items that help make customization something you can easily do on the fly as you wait to respawn during a match.

The choice to have fewer, more refined classes was definitely a wise one. With Bad Company 2‘s emphasis on team-centric multiplayer, everything meshes nicely. There’s nothing quite like having one person in your squad infiltrate the enemy base, then using squad spawn to appear a few feet behind them and take a handful of enemies out in a matter of seconds. 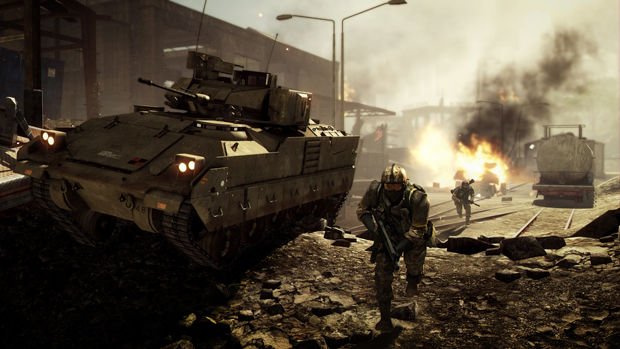 The leveling system is deliberately slower than what you might be used to, but it works. Sure, you won’t be leveling up every two, three, or even four matches, but you’re constantly being handed something new. Every step of the way, it feels like you are making tangible progress.

I can go on and on all day about how great the multiplayer in Bad Company 2 is, and I kind of already have. With that in mind, the one last thing I want to stress is this: balance. I have no idea how DICE was able to pull it off — luck or otherwise — but the balancing of the guns, the classes, and even the maps is good. Really, really good.

It’s all too common to be in a Rush match with less than ten team respawns left only to miraculously come back and win the game moments later. I keep waiting for someone to find a cheap exploit of sorts and prove me wrong — like a ridiculously overpowered class setup — but so far, nothing. 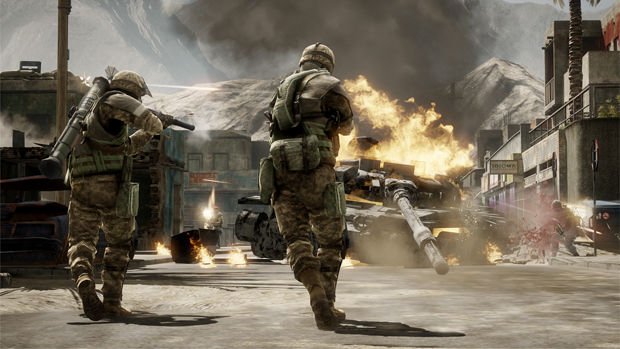 About the only negative I can come up with is the vehicle controls, which are not exactly terrific. “Unusual” sums the experience up quite nicely. The more simple ones, such as the ATVs, are fine. Too fast for their own good, rendering them a blast to ride, but fine nonetheless. Helicopters? Talk about a deep learning curve. You will crash a helicopter during your first attempt at piloting one; this is fact. For series veterans, none of this is news, however.

As hyperbolic as this may sound, Bad Company 2 provides some of the best team-based multiplayer around. It’s an utter shame that the single-player is only decent at best (even that is being generous) — otherwise, we’d have a real winner on our hands.

Whether the game is worth purchasing entirely depends on how interested you are in owning another online first-person shooter. Bad Company 2 is undeniably going to contain the next big multiplayer scene for some time to come. If you are interested, even slightly, absolutely buy this game. Stop reading this review right this second and go get it; don’t even look at the score. Everyone else, especially those of you who are strictly into gaming by yourself, it’s simply not right for you.