After Rocksteady’s heavy and dark Batman: Arkham Asylum, gamers and fans of The Dark Knight might be looking for a nice palate cleanser. Their answer is WayForward’s Batman: The Brave and the Bold, a cooperative, retro-style beat ‘em up based on the Cartoon Network series of the same name.

With its sharp humor and a highly-stylized Technicolor visuals, each episode of the Brave and the Bold cartoon pairs the Caped Crusader with a variety of DC heroes. With its game adaptation, WayForward has done a spectacular job of remaining true to the series, with four original “episodes” that mirror the set-up of the show. Each episode begins mid-battle, a one-off mini-adventure that throws players into the action before the credits (yanked directly from the series) roll. It’s then that the episode — one of the four self-contained tales that takes Batman everywhere from Gotham City to Planet Oa — really kicks off.

Fans solid, old-school side-scrolling beat ‘em up action are in for a real treat with Brave and the Bold. Utilizing both the Wii Remote and the Nunchuk, the combat isn’t going to blow minds with its complexity, but it manages to pack enough of a satisfying punch that fans of the genre will find themselves pleased with the action. WayForward keeps the Wii Remote waggle-fest to a minimum here, with the A button being the basis for your basic attacks, which can be chained together with repeated button presses. In conjunction with the Nunchuk analog stick, you’ll be able to dash attack, trip enemies or even knock them in the air, following up with B (to jump) and then juggling them in the air. Players should be prepared for basic motion control actions, though. Shaking the Wii Remote will unleash a strong attack or cause your hero to perform a downward attack if in the air, and an on-screen cursor can be used to aim certain gadgets. 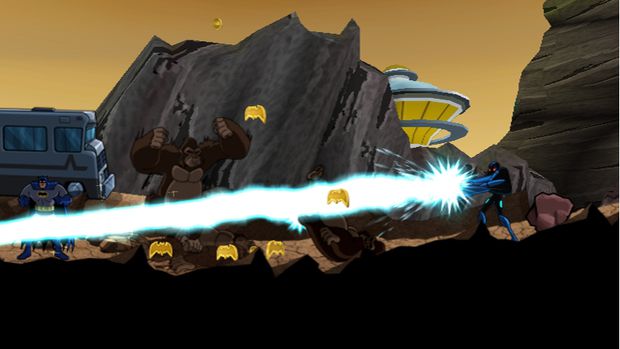 Oh, and then there are the toys — there are plenty of extra toys heroes can use and upgrade, ranging from completely necessary accessories to those you’ll want to throw in to the mix simply to switch things up. The Dark Knight’s Batarang, for instance, will need to be used to trigger switches in the environment, or target enemies off in the distance. On the other hand, the light sword, an item you’ll purchase with in-game currency (enemies and destroyed objects will scatter coins everywhere), isn’t mandatory… but it’s damned cool to whip out in battle. As the game progresses, new items will automatically be added to your arsenal, as well, which means you’ll never be stuck without key gadgets when the time comes to bring them into action.

While the game can be played alone, it’s likely you’ll want to bring a pal along for the ride in cooperative play; Brave and the Bold is about superhero team-ups, after all. Partner characters range from Robin to Blue Beetle, and the good news is that each fighter’s moves and abilities are completely unique, encouraging players to move out of their Batman comfort zone. While the controls remain the same, the attacks and feel of the characters differ enough that each hero feels fresh, offering up some reprieve from the tedium many beat ‘em ups suffer.

Even when you go into Brave and the Bold alone, you’ll have the option to control Batman or a sidekick character, with the game taking full control over the second player. Here, the game’s poor AI makes this second character negligible beyond narrative reasons. They neither get in the way nor to they add much to the battle, so they’re just kind of tagging along for the ride to provide witty banter and move alone the story. The AI is also extremely stupid, falling into holes, running directly into traps, and mostly providing unintentional comic relief. The fortunate part here is that this won’t affect your game at all, as they can die repeatedly without any impact on your progress; it’s entirely possible to take care of the game’s villains (including the more complex bosses) while completely ignoring your computer-controlled partner. 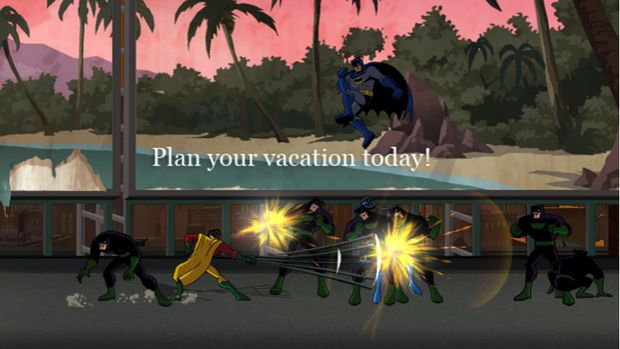 Brave and the Bold isn’t a particularly difficult game; from start to finish, I’d never saw a single “game over” screen. Once your health is knocked down to zero, the game will trade 100 of your in-game coins (which are pleasingly spilled from fallen enemies and busted environmental objects) for another life, instantly tossing you right back into the fracas. Presumably, if you didn’t have 100 coins to spend, the game would end; this never happened to me, so I couldn’t tell you if that’s really the case.

During the game’s boss battles, player lives and coins aren’t even accounted for, and you’ll instantly be revived after losing your health. While the end of each level will grade you based on your performance (including how many times you did fall in battle), there’s no overwhelming sense of difficulty in the Brave and the Bold. This may have been intentional, as the game was likely designed to skew a bit younger. Gamer parents looking to play a cooperative game with their little ones will be pleased to hear that the game isn’t punishingly difficult.

That’s not to say Brave and the Bold is a boring cakewalk, though. The game manages to throw enough variety in terms of environments and unique boss battles that you’re almost consistently seeing something new from start to finish. While the core beat ‘em up remains unchanged throughout, there are a few places that WayForward switches things up. The game’s main villain battles, for instance, are never straightforward “mash some buttons, dodge some attack” affairs. Each has its own unique patterns and “kill rules” which will require a bit of thinking on the player’s part. As usual, you can also count on the fact that pounding on endless mobs of thugs is a joy in and of itself. 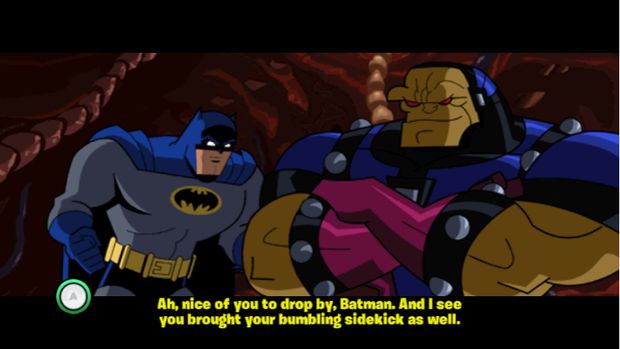 Brave and the Bold also manages to capture the superb wit and tone of the show, with four original stories that WayForward and Warner Bros. Animation collaborated on simply for the game. The result is highly-entertaining stories with dialogue that literally had me giggling on my couch. Fans of the show will feel as if they’re participating in lost episodes, helping the action unfold. Those unfamiliar with the show will want to set the DVRs for when the series resumes on Cartoon Network later this month.

WayForward is already known for its jaw-dropping hand-illustrated and frame-by-frame animation process; one need only look at the visual treat that is the developer’s last Wii title, A Boy and His Blob. With Brave and the Bold, the developer brings its A-game, with eye-popping character animation and vivid environments that come to life on the Wii. Even in close-quarters battles, when the camera pulls in tighter on the action, the game still looks stunning in motion.

Batman: The Brave and the Bold doesn’t do anything “bold” in terms of game design, but it doesn’t try to; instead, it delivers a solid and enjoyable experience from beginning to end. It isn’t going to win anyone over for its finger-blistering difficulty, either, so fans looking for an old-school challenge should check their expectations accordingly. But super sharp visuals and clever writing make this a collection of Batman adventures you won’t want to miss.

Score: 8 – Great (8s are impressive efforts with a few noticeable problems holding them back. Won’t astound everyone, but is worth your time and cash.)