The Art Style series has silently grown from a small collection of Japan-only GBA games to a large catalog of minimalist masterpieces on DSiWare and WiiWare. At last count, there were 12 games released in the United States under the Art Style name — not bad for a series that’s only been around for a few years.

The latest in this low-profile line of Nintendo-published titles is light trax, a vector-graphics-based puzzle-racer that combines the light cycle combat of Tron with the structure of Mario Kart. At least, that’s what I thought the game was doing at first. After really getting into the game, I’ve seen that light trax does a lot more than combine Tron with kart racing. With light trax, everything that’s usually important in a racing game gets bottom priority, and most of the less glorified aspects of your average racer take the spotlight. These sorts of deviations from the norm are part of what I come to expect from the Art Style games, and light trax is no exception.

Deviations are all well and good, but that doesn’t mean that they lead to to a fun game. Does light trax manage to be interesting and well made? Hit the jump to find out.

First, a non-extensive rundown of the important gameplay aspects of your average kart racing game, presented in order of importance:

2) Controlling your speed with acceleration and braking

Light trax takes all that and puts it in reverse order. Taking corners is the last thing you have to worry about, as turning is actually done automatically. Acceleration is also automatic, and braking is only helpful on rare occasions. The one thing you’ll be doing constantly is managing which lane your “car” is in. Items can have a big impact too, but overall, it’s the management of the lanes that makes or breaks a racer in light trax.

That’s all due to the game’s unique “boost leeching” system. The only way to increase your boost meter is to race right next to the trails left by other “cars.” Whoever builds and utilizes their boost meter the most, wins. This puts the guy in first place at somewhat of a disadvantage, as being ahead of the pack means that everyone’s trail is behind you, which means no boost building. Instead, the “car” in first is tasked with driving as close to as many on-course obstacles as possible, without actually hitting them. That will lead whoever is in second to potentially smash into them as they follow your trail, which in turn will hopefully cause whoever is in third (who’s most likely leeching off whoever is in second) to also hit the trap. It’s pretty interesting stuff, not quite like any racing game I’ve ever played.

It all seems a little too easy at first. Without needing to concern yourself with cornering or managing the brake/gas pedals, the game almost feels like it’s playing itself. Position yourself next to someone’s trail, hit boost when your meter’s full, and you’ll get to first place. Don’t screw up too badly from there, and you’ll win. In the first few races, it’s actually even easier than it sounds. You’ll go seconds without needing to press a button or hit the control pad. That all changes pretty quickly, though, thanks to some extremely threatening course design that arises by the fourth race.

From there, multiple traps, on-course obstacles, boost panels, and pick-ups become commonplace. The amount of stuff on the track gets pretty crazy pretty fast, and the game starts to feel more like an obstacle course than a race track by race five. There is also a boost/damage system to manage. Light trax has an F-Zero-like health system where you can trade some life for a boost. Depending on the stage, you’ll start with 0-3 hearts. Hit a wall or another death trap, and you lose a heart. Lose all your hearts, and it’s race over in last place. Confident players will use all their hearts for the boosts and take the risk of instant death, which leads to a more risky, exciting experience.

The game’s camera also tries to freak you out. I haven’t played a new series that uses camera placement for cheap thrills this frequently since the first Resident Evil. Each regular race starts out with the camera placed over your “car,” with your “car” set to race from either right to left or left to right. From there, things can change abruptly at any turn. If the course bends left, the camera may suddenly switch to the standard racing game “behind the back” view, or to an upside-down view, or any other angle that the developers can think of. This forces the player to quickly change their control orientation. Turning may be automatic in this game, but game’s camera will still have you stressing out at every turn. 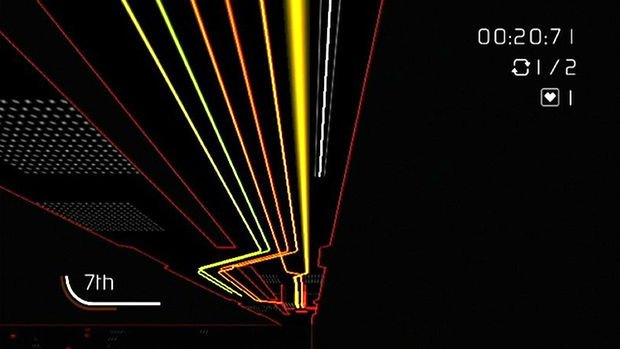 As fun as that is, it causes the game’s difficulty to feel a little unfair at times. There are quite a few courses that switch to the behind-the-back camera angle on a turn, while your “car” ends up driving from left to right across the screen. This angle sucks, making it nearly impossible to tell exactly which lane you’re in at the time. These moments usually only last for a second, but they make the game nearly unplayable for as long as they last. Imagine temporarily going colorblind while playing a color-matching puzzle game; that’s the effect that these moments have on your ability to stay in the correct lane. Though these moments of disorientation do lead to a brief thrill, they also feel a bit contrived. A game shouldn’t have to rely on handicapping the player to that degree in order to manufacture some difficulty.

There are parts of the game with no camera angle changes. These “highway” segments show up after every three “regular” races, and act as punctuation marks between courses. The rules of the game change here. The camera is always set behind your car, your top speed goes way up, and you’re now racing against time instead of against other “cars.” The goal here is to race down the highway as fast as you can, leeching speed and bonus time off passing cars along the way. Do well enough, and you’ll reach the next “regular” race course. If the main races are the game’s stages, these highway segments are the boss battles. They also feature new visuals and music you won’t hear elsewhere in the game. These “highway” bits are easily my favorite part of the game, and I’d have been happier if they made up the bulk of the light trax experience. 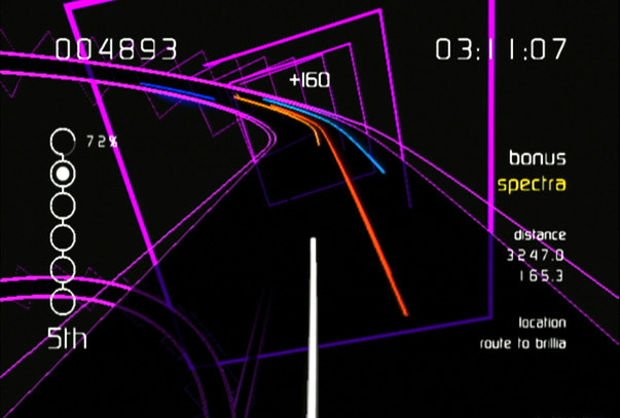 The game’s music and graphics are likely to be a love-it-or-hate-it affair. Just by looking at these screenshots, you might be able to guess which camp you’ll fall into. The game does look a lot better in motion, though, and has a certain “a painting you can play” hypnotic effect on the more interesting courses, not unlike the PS3’s flOw or Flower, except even more minimal. The soundtrack is a mash-up of trance, chiptunes, and drum and bass. Each of the games 15+ tracks gets its own theme, and for my money, the game is worth the $6 for the soundtrack alone. I’m usually not the biggest fan of electronic music, but this time is different. Some of this stuff is downright beautiful.

While the game does pack an impressive value in those ways, it’s surprisingly lacking in other areas. When was the last time you played a new racing game that had no multiplayer of any kind? For me, I think it was Pole Position on the Atari 2600. Even Racing Construction Set on the C64 had split-screen multiplayer. Light trax lacks any multiplayer to speak of, split-screen or otherwise. Because of that, the game doesn’t have much replay value. After you’ve seen every track, you’ll likely not touch the game again for a while, unless you love the soundtrack as much as I do. If that’s the case, you might boot the game up once every few weeks just to listen to it, not so much to play it. 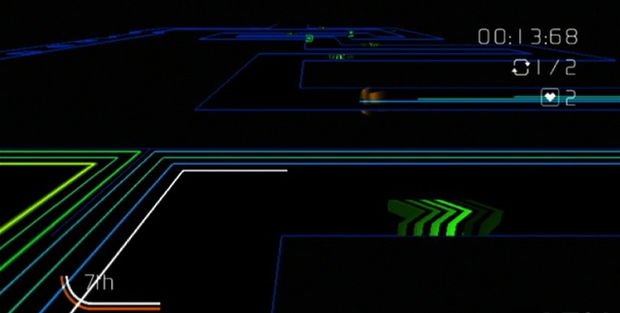 In the end, light trax is an interesting experiment that I really enjoyed. It’s way too easy sometimes, yet too hard for the wrong reasons at other times, and the lack of multiplayer just feels wrong. That said, I more than got my $6 worth. The game can be beautiful to look at in a simple, elegant way, and has plenty of memorable electronic “songs” to fall in love with. More than that, light trax effectively turns the racing genre on its head, something I haven’t seen done since Road Rash on the Genesis. If they make light trax 2 with a little more to do, a more consistently fair camera, and a versus mode, that game could get a 10. This one gets a…